Before the End of Days happened and I couldnt hide my sociopathic hatred of other people behind the very valid threat of how going outside might legitimately kill me, I was a London Underground vet. And Ive seen things you people wouldnt believe. Survive down there long enough, and the spiderweb of interconnecting tunnels, Penrose escalators and bewildered foot traffic slowly starts to make awful, frenzied sense and you no longer need to rely on exhausted rail workers who have been asked how to get to Piccadilly seven hundred and fifty nine times in the last half hour. Theres a pattern there, but it clearly came from the broken, chaotic mind of either a deranged lunatic or an eldritch horror. Perhaps, then, I should take some kind of affront to having subway design sim, STATIONflow show up in my work pile.

I mean, I guess it has some appeal. I suspect anyone forced to endure subway systems anywhere have offered mental redesigns to distract themselves from just how tardy the train theyre waiting on is. Cleverly, STATIONflow doesnt concern itself with the trains themselves and simply puts you in charge of connecting the train platforms up with the entranceways in as efficient a way as you can. To start with, its all pretty easy; careful not to overburden you with myriad design choices, the game presents a simplified and minimalistic way to plot corridors and stairwells aplenty and then introduces you to its most overworked addition; the simple signpost. 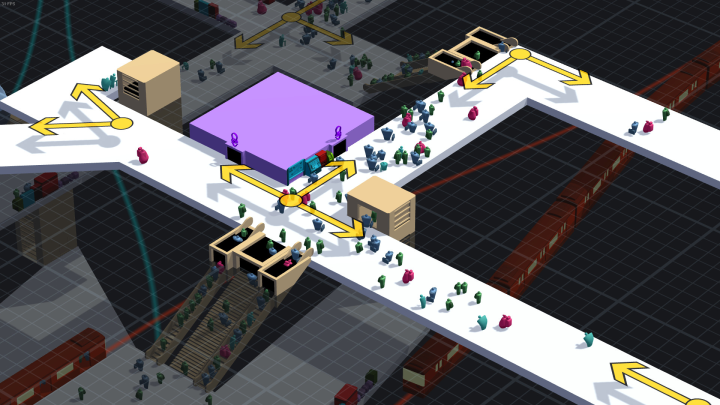 To begin with, signs have an easy life and, therefore, so do you. Youre given limited entrances and limited platforms, so the adventurous first wave of passengers have very few reasons to get horribly lost. But get horribly lost they will, regardless! This is easily remedied initially; you can slap signs up at points where corridors divulge, nudging weary travellers towards their train of choice or nearest exit. At this stage of the game, simplicity is key because people are buffoons. Give them a simple path to follow. Give them confirmation theyre travelling it correctly or something to warn them when they stray, and you can fill their empty little heads with a feeling of contentment. Enjoy that; it wont last.

Soon, you are presented with new obstacles, some of which feel a little unfair. For example, suddenly, Robold people exist and theyre very, very annoyed about all that walking they have to do. With zero warning, you suddenly need to reallocate access to all the platforms so they include escalators rather than stairs, or jam in lift systems to appease the infirm and the lazy. You can do that, sure, but construction isnt immediate and youre forced to swallow a disliked station while these new additions you didnt know you needed until you were told you should have had them are built. And then, once theyre built, better make sure your sign network is updated to accommodate them. 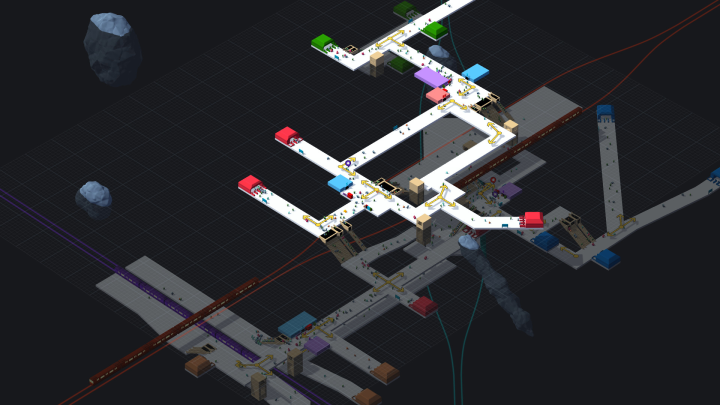 Youll be updating signs a lot. On the assumption you dont accidently design a labyrinth or JRPG dungeon crawl, keeping your signage up to date should keep all the simmering homicidal rage boiling just under the surface of your weary commuters. Not everyone, of course; you could say that some people are quick to anger over little to no justification, and its certainly annoying to be penalised for no foreseeable reason. But Ive been on the underground. People trying to find trains are the worst of people, just behind sliding tile puzzle designers. Getting unfeasibly angry for no applicable reason is all part of the scene.

You can try and win them over as further options become available to you, like vending machines, first aid station and toilet facilities. Though theres no campaign mode or story progression available to you, the drip feed of new building options and having to cater for an increasingly diverse consumer base is what will keep you tinkering away at your subway station. The worlds against you, but so long as you dont fall into horrendous debt of offer designs so awful they make people swear off public transport for life, your station will live on until the Apocalypse. And thats not scheduled until next Wednesday.
3.5/5

If you enjoyed this STATIONflow review, you're encouraged to discuss it with the author and with other members of the site's community. If you don't already have an HonestGamers account, you can sign up for one in a snap. Thank you for reading!

© 1998-2020 HonestGamers
None of the material contained within this site may be reproduced in any conceivable fashion without permission from the author(s) of said material. This site is not sponsored or endorsed by Nintendo, Sega, Sony, Microsoft, or any other such party. STATIONflow is a registered trademark of its copyright holder. This site makes no claim to STATIONflow, its characters, screenshots, artwork, music, or any intellectual property contained within. Opinions expressed on this site do not necessarily represent the opinion of site staff or sponsors. Staff and freelance reviews are typically written based on time spent with a retail review copy or review key for the game that is provided by its publisher.