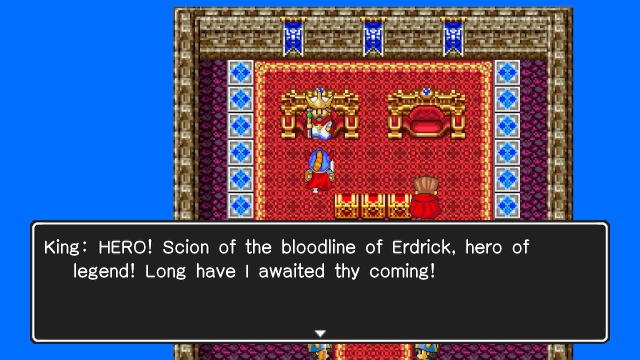 If you're an older gamer, then you might identify with this scenario. You remember a certain NES game exists and suddenly develop an urge to replay it, so you search your closet until you find that console and the familiar gray cartridge. Or you hit the internet and download the game like some kind of pirate. You set the system up and restart the experience from your childhood or teen years... Except it's not quite how you remember it. It's slower, antiquated and almost intolerable compared to the snappy, charming adventure you recall. As it turns out, years spent playing modern games has altered your standards, and now you find some older titles aren't up to snuff.

Such was my experience replaying the turn-based RPG Dragon Warrior. Where the game held my attention in my youth, I couldn't stomach a playthrough nowadays. It moved more slowly than I remembered, involved more grinding than I preferred and featured obsolete design choices. For instance, in order to speak with an NPC, I had to stand next to them, open a menu and select "Talk" to get any info out of them. I mostly received flavor text for my trouble, which proved worrisome since I needed to gather as much info from townsfolk as possible. Given that each of the six towns held a dozen or so citizens (and even more in the introductory castle), I had a lot of tedious menu opening ahead of me.

Thankfully, I found a pretty sweet remedy to these issues: a remake.

I know, that dreaded R-word draws a lot of negativity, but let me assure you that no one is destroying your childhood with this update. Rather, this title focuses on cutting out extraneous features, streamlining mechanics and updating the presentation and music. For instance, brighter, sharper visuals replace the 8-bit sprites we all remember. While it's hard to say goodbye to the old school graphics, the "new" character models and enemy designs remain as vibrant and charming as ever. Hell, I'll even say that the bright visuals mesh better with the game's simplicity, reminding you not to take this RPG too seriously. 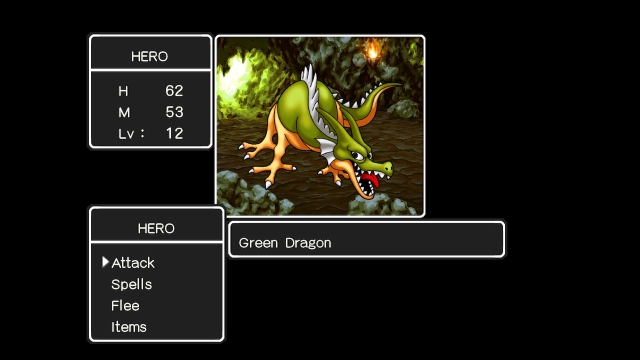 However, simplicity was also one of the stumbling blocks of the original campaign. Granted, it offered a pretty standard set of objectives for its time, including such ancient plot beats as rescuing a damsel, slaying a dragon, hunting legendary event items and overthrowing a malevolent sorcerer. However, the genre has evolved tremendously since the '80s, with games like Final Fantasy and Phantasy Star (and even subsequent Dragon Quest entries) showing us that RPGs could explore plot devices other than killing giant reptiles and winning the favor of kings.

This iteration doesn't upgrade the plot whatsoever. You don't encounter any new content, side quests, cutscenes or story events. It offers the same campaign found in the 1986 release, which might be a deal breaker for anyone hoping for a complete overhaul. However, since this version is intended to serve as a modernized revisit of a vintage title, maintaining the original campaign was the right call. In this case, the game provides a more palatable nostalgia trip without completely erasing its predecessor's identity.

As before, the remake doesn't boss you around. It leaves you to your devices, providing you with a world that you can explore at your own leisure--provided that you actually prepared to venture farther out beforehand. In other words, you don't run afoul of loads of dramatic dialogue between your hero and supporting characters, detailing what you need to do next. It's your responsibility to puzzle your quest out by charting the land, talking to folks (thankfully without opening a menu this time) and piecing together the sequence of events. And honestly, that sort of non-linear approach is a wonderful, forgotten feature. It's great to experience it again with half the hassle. 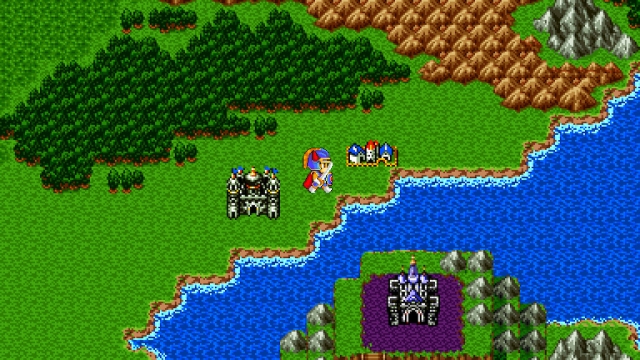 Of course, if you've played the original and you remember a lot of its secrets, then the campaign should only take you about about ten hours to complete. Even if you don't know the entire sequence of events, it isn't too hard to figure out. On top of that, modern players have the benefit of FAQs and wikis to guide them, whereas fogeys like me had to rely on back issues of Nintendo Power and word of mouth back in the day.

And that was assuming you could find the issue you were looking for at your local library. Don't even get me started on that experience...

Besides, in regards to drawbacks, the original's shallow story paled in comparison to the long hours of monotonous grinding that cropped up constantly. The instant you set foot into the forbidding world, you couldn't embark on an in-depth exploration of the land because your character wasn't strong enough to last more than a few battles. So you ended up wandering around just outside of the castle, chopping up cute little slimes and smiling winged creatures until you gained levels and bought improved equipment. With those things secured, you pressed farther outward, murdered similarly adorable (albeit more powerful) critters for elevated amounts of experience and cash, and the process became such a seemingly endless cycle that hours felt like days. 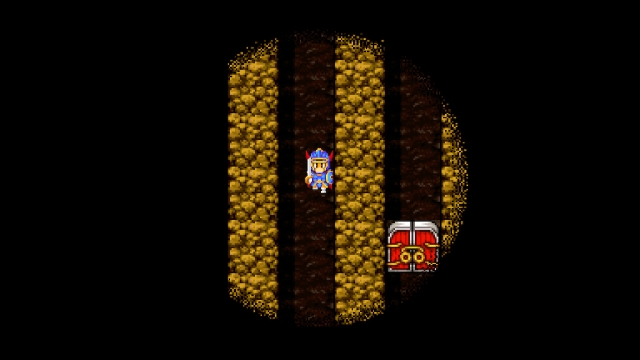 The remake still provides more of the same nonsense, but with swifter combat mechanics and slightly revamped balancing that make grinding much more tolerable. Mainly, this is because you don't spend numerous hours bumping off wildlife just so you can stand up to slightly stronger foes. This time around, battles come and go more quickly and smoothly, allowing money and experience to pile up in a fraction of the time. Of course, you do still have to spend a fair chunk of time grinding, but you don't turn doing so into a full-scale project.

Look, all I'm saying is that the Dragon Quest remake is as faithful as any enhanced edition can be while providing actual enhancements. It doesn't present any drastic or insufferable changes, and actually plays more smoothly than its predecessor did. Plus, you aren't likely to turn this one into a major, time-draining affair. If you're just revisiting for old time's sake, you can get through it quickly and move on to more substantial fare. If you're interested in replaying Enix's classic and one of the first major console RPGs, you don't need to dig your NES out of the closet or download a ROM just to be disappointed by antiquated design. You can pick up the Switch version and immerse yourself in its simplicity, now with less annoyance.
4/5

If you enjoyed this Dragon Quest review, you're encouraged to discuss it with the author and with other members of the site's community. If you don't already have an HonestGamers account, you can sign up for one in a snap. Thank you for reading!

© 1998-2020 HonestGamers
None of the material contained within this site may be reproduced in any conceivable fashion without permission from the author(s) of said material. This site is not sponsored or endorsed by Nintendo, Sega, Sony, Microsoft, or any other such party. Dragon Quest is a registered trademark of its copyright holder. This site makes no claim to Dragon Quest, its characters, screenshots, artwork, music, or any intellectual property contained within. Opinions expressed on this site do not necessarily represent the opinion of site staff or sponsors. Staff and freelance reviews are typically written based on time spent with a retail review copy or review key for the game that is provided by its publisher.