1943 is quite a shooter, I always loved Capcom's "40s" series and had been on the lookout for any other sequel they had done to them and such. The NES port is as fantastic as the arcade original downright to the bonus features that are included with. I had played such games every now and then and quite frankly I don't think I would ever stop doing so.

Immediately after pressing START you are taken to a screen filled with options to customize your plane before you begin the game. You are given a couple points to modify various offensive and defensive attributes and then are sent on your way to do areal battle. Some attributes increase energy points, others increase the number of weapon power-ups onscreen. Although you are not given much to start with you can also gain more points whenever you encounter a bonus item on any stage to add more points to desired attributes. 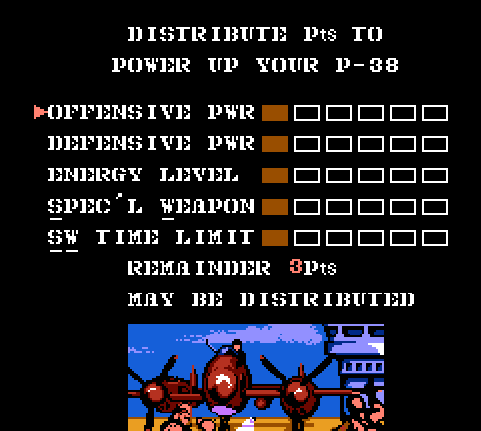 Unlike the Arcade original where you have access to certain power-ups on the go, the NES port would have you get such only if you increase certain aspects of said attributes, otherwise you would be stuck with your normal firepower settings quite often. This actually adds to the challenge in gameplay. On this port you have a numeric energy counter that countdown slowly even when you are not hit, something that makes the experience a bit more difficult and frustrating. Even if you increase the energy attribute to increase capacity, you will find out that it takes a few shots to end your adventure. Unlimited continues are actually something that you can count on as long as you don't reset the game.

Otherwise gameplay does not differentiate from its Arcade original; you fly and destroy every other enemy coming your way from the top of the screen then dive in to fight seaboats and carriers until meeting that area's boss. At times you would fight a humongous airplane at the end of the stage, but in both instances you must deal substantial damage otherwise you will send back to the beginning of that stage to complete the mission. If successful, you are treated to a screen showing the damage dealt to the boss enemy along with bonus points awarded as well as having some of the plane's energy replenished to continue the game.

The path to victory is quite a lengthy one, but 1943 is highly entertaining even to this day, guaranteeing plenty of replay value.
3.5/5

If you enjoyed this 1943: The Battle of Midway review, you're encouraged to discuss it with the author and with other members of the site's community. If you don't already have an HonestGamers account, you can sign up for one in a snap. Thank you for reading!

© 1998-2020 HonestGamers
None of the material contained within this site may be reproduced in any conceivable fashion without permission from the author(s) of said material. This site is not sponsored or endorsed by Nintendo, Sega, Sony, Microsoft, or any other such party. 1943: The Battle of Midway is a registered trademark of its copyright holder. This site makes no claim to 1943: The Battle of Midway, its characters, screenshots, artwork, music, or any intellectual property contained within. Opinions expressed on this site do not necessarily represent the opinion of site staff or sponsors. Staff and freelance reviews are typically written based on time spent with a retail review copy or review key for the game that is provided by its publisher.