Sega, upon readying to launch one of its biggest mistakes, a mushroom-shaped add-on for the Sega Genesis, needed games. It needed games to impress, or this whole thing wasn't gonna fly with apathetic onlookers already preparing for the Sony PlayStation and Sega Saturn. So what's a neat sci-fi thingy people really like? Star Wars. What did Sega have at the time? An arcade Star Wars game released a year prior to the 32X launch. Even better, Star Wars Arcade is a 3D space combat title, meaning the company had an opportunity to flex the mushroom's graphical prowess. Though, mere seconds after starting the game, it looks like the add-on console is trying its best not to explode while handling polygons with no texture-mapping.

Whether objects are gravitating towards the camera from a distance or just flying away from it, you can only really see a glob of jaggy polygons trying to form... something. It's when objects are close enough or big enough on screen that you can make them out in any real detail. Thankfully though, Arcade is not a complex title that requires a bevy of objects to identify. You're usually asked to attack or counter three main opponents from the Empire: a gang of TIE fighters coated in blues and grays, turrets, or the pizza-shaped Star Destroyers. And due to the subtle efforts of the sound effects, you can always tell when a TIE fighter is screeching across the battlefield. 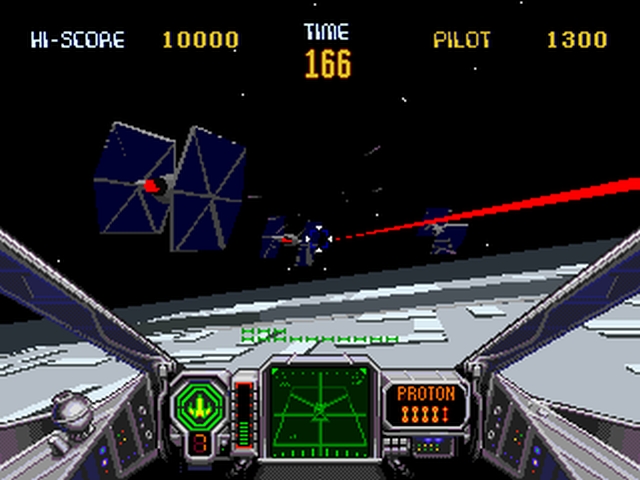 However, don't get it twisted; while seemingly primitive, it's an impressive feat for an early-1990s, cartridge-based "console" to handle 3D consistently, and one that still manages to be playable when the framerate drops below 30. Graphically, the game is at its best when taking your X-wing or Y-wing through the Death Star's trenches or inside a Super Star Destroyer, flying past all sorts of pillars, pipes, and other structures. Granted, everything is melding and morphing into each other as the path gets smaller, but it is a testament that you can make out the environments even at this point.

Gameplay too, while overwhelmingly-basic as a flight combat title, has its moments. For the most part, you'll be participating in dogfights where 20 or more TIE fighters have to be destroyed within a time limit, whether with projectiles or locking-on with proton torpedoes. Other standard tactics, such as slowing down to force anyone from behind to push on ahead for an attack, is a given. Though, the engaging part comes with trying to shoot so many down within said timer, which can be tricky when AI pilots become stubborn with their maneuvers, such as one or two remaining fighters flying away when the countdown is near-exhausted. The fights also become genuinely exciting depending on the environments; as you're getting a vital TIE fighter inside your crosshairs, you'll likely fly through a stream of giant laser projectiles being shot from a nearby Star Destroyer.

The other stage type involves navigating the aforementioned trenches. You think one of the most iconic moments in Star Wars would get some love, but these stages are absolutely dreadful. Unlike the dogfights where you fly anywhere on a "map," here you're stuck on a linear path where you're forced to contend with whatever danger pops up. TIE fighters, shockingly, are frustrating to take down simply because you have to aim at them. This is problematic since they're usually hanging near surfaces, and if you get slightly near these corners to aim, you get damaged; you either have to blow up their torpedoes before they hit you, or just hope the field widens a little bit. This is an issue with one TIE fighter; it's a pain with two at once. Even more horrible is how some TIE fighters clip inside walls and ceilings, making them nearly impossible to target. 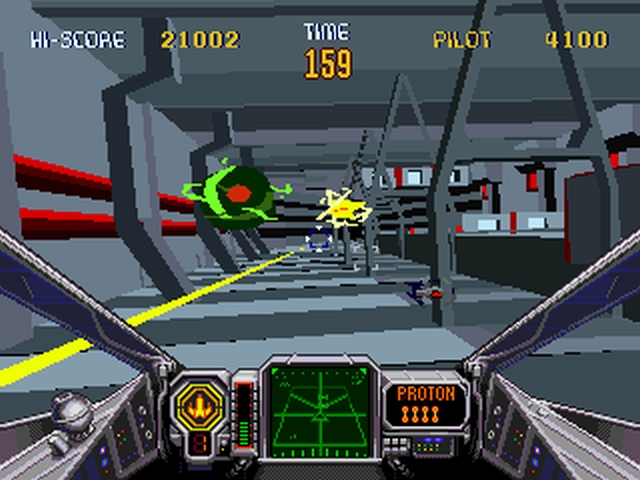 Other enemies, such as flashing laser turrets, are easy to dodge since their projectiles travel in one direction, but then there's wall cannons that dispense proton torpedoes. You can barely see the latter when they materialize from a distance, and what makes this ridiculous is that they fire torpedoes the moment they appear. You pretty much have to memorize where the cannons appear and still guess where to shoot. So, you have TIE fighters that clip through walls which you can't hit and cannons that are borderline invisible, both attacking at the same time and in sets. All this while you have to dodge and weave around pillars and pipes. Don't forget that the trench stages get more enclosed the further you travel, so have fun with that. Anything else? There's also limited continues, so get used to seeing Darth Vader's game over screen a lot.

In addition to arcade mode, there's a 32X mode that slightly rearranges stages and gives you more dogfights. This, in turn, delays the first trench stage for a bit. Eventually, however, you'll have to face it: that dumpster fire of game design. Is completing Star Wars Arcade impossible? No, but it's a genuine pain to get through. If you play the game long enough, memorize where enemies spawn in the trenches, and have enough commitment, you will make it to the end. But why? That level of energy and effort could be spent on a better, more entertaining game.
2/5

If you enjoyed this Star Wars Arcade review, you're encouraged to discuss it with the author and with other members of the site's community. If you don't already have an HonestGamers account, you can sign up for one in a snap. Thank you for reading!

© 1998-2020 HonestGamers
None of the material contained within this site may be reproduced in any conceivable fashion without permission from the author(s) of said material. This site is not sponsored or endorsed by Nintendo, Sega, Sony, Microsoft, or any other such party. Star Wars Arcade is a registered trademark of its copyright holder. This site makes no claim to Star Wars Arcade, its characters, screenshots, artwork, music, or any intellectual property contained within. Opinions expressed on this site do not necessarily represent the opinion of site staff or sponsors. Staff and freelance reviews are typically written based on time spent with a retail review copy or review key for the game that is provided by its publisher.