Conceptually, Ultracore is pretty straightforward for a title of its era; across five stages, you shoot a machine gun with unlimited ammo at droids approaching from the sky and ground, collect alternative weaponry that fire spreadshots and lasers, and.... shoot more droids. It's possible to make an entertaining game from that simple template, with the Contra and Metal Slug IPs showcasing solid examples. However, it's not a good sign when the game's rogues gallery consist of about three enemy types, with minor alterations of them introduced in subsequent stages; airborne drones become slightly bigger drones; robots with treads become robots with treads that shoot missiles, which can be countered by ducking; bipedal robots that shoot three successive projectiles become bipedal robots that shoot five successive projectiles, both of which can be avoided with a jump You get the point. 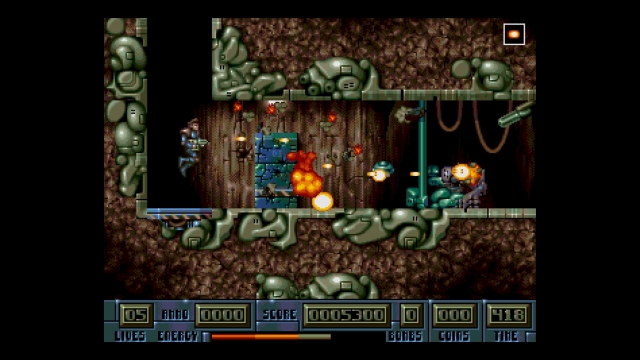 Now combine this with the uninspiring structure of Ultracore's level design. A lot of the action unfolds indoors, inside huge facilities with multiple floors littered with locked-off areas that require keycards or a pull of a switch. While sounding complex and seemingly favoring constant exploration, the game is still very much linear, immediately directing you to the appropriate direction when you reach an impassable spot. Alternative routes, at best, are minor deviations or direct you to a room with a health or ammo pickup. Again, it's still possible to make a good game out of something so routine, but again, that's not the case here.

When you enter the first stage's underground facility, you're tasked with going through slightly cramped corridors, ride elevators up and down, and occasionally do some basic platform jumping. All this while battling the countless horde of killer machines that look similar to one another. Now here's the major problem: this lackluster structure repeats for all five stages. You know what's more unimaginative than that? Stage two is a continuation of stage one, and stage four is a continuation of stage three, meaning you get to see the same backdrops, a mixture of drab brown and greys, twice. And considering the surroundings for those two background sets look borderline identical with their choice of colors, the first four stages basically feel like one long stage chopped into four parts.

In the midst of all this repetition, there's actually some varied obstacles and hazards to overcome. However, even these variations have their ups and downs. Early in the first stage, you come across a bridge that won't open, because a bunch of drones keep launching from the pit. The solution is to carefully hop across the robots like a plumber. Sadly, moments like these are few and far. The next and last time you see this concept? The last stage. Unfortunately, another type of "variation" is something you'll encounter more often, and that's one where you get screwed over. As you progress in an upward or downward fashion, the game doesn't allow the option to peek ahead... Suffice it to say, you will fall in a lot of pits, not to mention take elevators to floors where a robot horde is standing at the drop-off point. Frustrating, especially since it's all deliberate from the developers.

It's not until the final stage where Ultracore actually seems like a normal game. Stage five is the longest of the bunch, has the most variation when it comes to obstacles and ideas, and, because of those two, is the most challenging. Though, you'll still be burdened with awkward enemy placements and nonsensical pit deaths. Regardless of those issues, stage five feels the most fleshed out, making everything prior coming off like a prototype in comparison. Regrettably, the final stage alone can't salvage the entire product's sense of blandness, disjointing flow, and being a pain when you least expect it. Ultracore is a neat piece of resurrected history, but one that becomes a chore when you get a chance to play it.
2.5/5

If you enjoyed this Ultracore review, you're encouraged to discuss it with the author and with other members of the site's community. If you don't already have an HonestGamers account, you can sign up for one in a snap. Thank you for reading!

© 1998-2020 HonestGamers
None of the material contained within this site may be reproduced in any conceivable fashion without permission from the author(s) of said material. This site is not sponsored or endorsed by Nintendo, Sega, Sony, Microsoft, or any other such party. Ultracore is a registered trademark of its copyright holder. This site makes no claim to Ultracore, its characters, screenshots, artwork, music, or any intellectual property contained within. Opinions expressed on this site do not necessarily represent the opinion of site staff or sponsors. Staff and freelance reviews are typically written based on time spent with a retail review copy or review key for the game that is provided by its publisher.