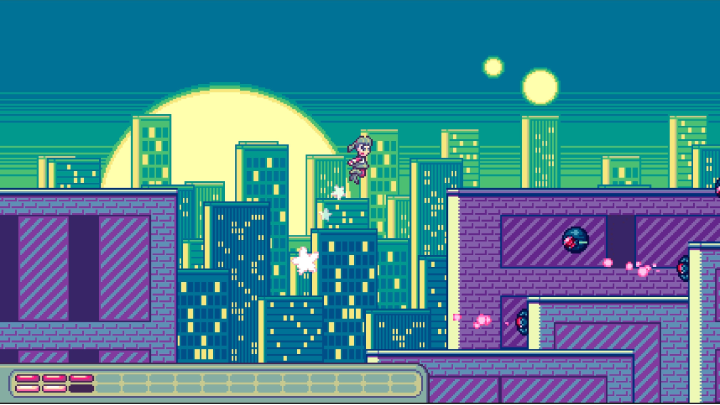 The not-quite-classic I'm referring to is Valis, a surprisingly long-running series played out mostly on the obscure Turbografx-CD system of yesteryear. And yes, I'm fully aware that no one has heard of Valis (or the Turbografx, for that matter), but the comparison stands, for what it's worth (not much). I mean, we've got a female protagonist, striking out on a side-scrolling mission over top an abundance of pink and purple pastel hues which curiously dominate the backgrounds. Our heroine can run and jump, as well as shoot magic from her hands, which is a departure from Valis's melee weapon wielding. She can also dash on the ground and in the air -- all of which is really more reminiscent of Mega Man X, a much better known series. But I'm going to stubbornly maintain that this game's aesthetic reminds me more of the lesser known of the two IPs.

One thing Proxima certainly doesn't have in common with either of those games, and really any action game is its paltry enemy headcount. Some levels are inhabited by no foes at all -- it's just a quick jaunt to the exit door and on to the next. Most levels have static turrets populating hallways and a few different kinds of annoying, buzzing, hovering drones: some that you can see coming, and others which materialize out of thin air in your midst. In any case, you won't often die as a result of a clash with foes.

So the platforming is a breeze, and strangely, Proxima isn't a puzzler either. Though some levels offer some semblance of a maze-like structure, you'll never get lost, and you won't be stumped. If you're keeping score then: you'll navigate bland, repetitive hallways and open areas draped in nondescript, washed out pastel backdrops. There is seldom an enemy worthy or capable of interrupting your progress. There is no head scratching to be done. And so the challenge comes mainly from staying engaged enough not to lose focus and make silly mistakes and die.

I found a modicum of enjoyment from areas which required stringing together a jump and dash, with a second jump and a second air dash to make it across some gulf between platforms. But I don't recall any scenario where failing the jump led to my death. I would simply fall to a lower platform and work my way back up. And so Proxima is a game devoid of tension, devoid of challenge, and devoid of excitement. The only reason I finished it is because I was tasked with reviewing the game, and it's very short and very easy. If you're still playing past the two minute hour mark, something's wrong.

To be absolutely fair, there are a few levels that pass as sort of boss encounters which provide some small spike of excitement in the proceedings. I counted three variations: one which features auto-scrolling, and a large enemy that is meant to be menacing, tracking you off in the distance and destroying platforms in your midst. The second has us ascending platforms with the alien menace rising up from beneath, encouraging you to make haste. Finally, the third variation offers another climbing challenge, but without the auto-scroll -- a shark-like enemy streaks back and forth across the screen, firing upon you to sap your energy but more importantly, looking to collide with you to bring about an instant death.

These boss-like challenge levels are the most notable thing the game has to offer. But they seldom come along and only serve to punctuate long stretches of what feels like, in a gaming sense, near inactivity. Despite the game's retro look and the fact that it evoked some fond memories for me by bringing to mind a game series that most of you probably don't care about, Star Girl Proxima is best left overlooked. Whatever promise she may have had with a game like this for a vehicle, our heroine will never be a star girl.
2/5

If you enjoyed this Star Girl Proxima review, you're encouraged to discuss it with the author and with other members of the site's community. If you don't already have an HonestGamers account, you can sign up for one in a snap. Thank you for reading!

© 1998-2020 HonestGamers
None of the material contained within this site may be reproduced in any conceivable fashion without permission from the author(s) of said material. This site is not sponsored or endorsed by Nintendo, Sega, Sony, Microsoft, or any other such party. Star Girl Proxima is a registered trademark of its copyright holder. This site makes no claim to Star Girl Proxima, its characters, screenshots, artwork, music, or any intellectual property contained within. Opinions expressed on this site do not necessarily represent the opinion of site staff or sponsors. Staff and freelance reviews are typically written based on time spent with a retail review copy or review key for the game that is provided by its publisher.