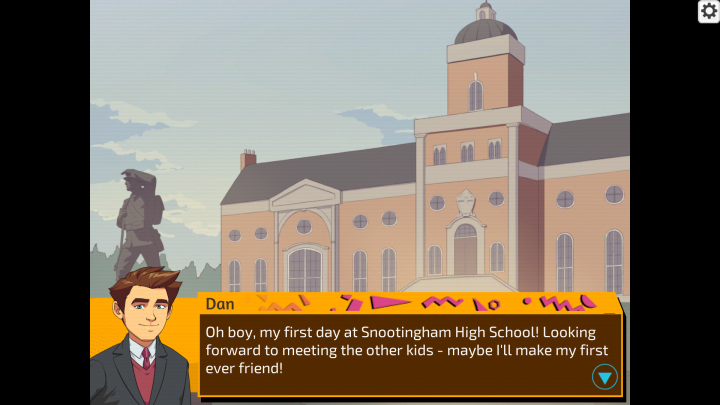 Devils Kiss is two things. As a standalone visual novel, its a decent enough time. Its a prequel, you see, of all those zany Size Five adventure games (the most recent of which being Lair of the Clockwork God) wherein you follow Dan before he meets perpetual adventure-y co-star, Ben. Its a tale that heavily reminisces about the radical 90s, lobbing random hot pink shapes à la Saved by the Bell as background to all the things, whisked up with stereotypical secondary school shenanigans.

Dans heart-warming quest to find his first ever friend hurls him serendipitously into the midst of an ongoing quest against the age-old enemy of all schoolgoers; the stuffy head teacher. The Head's the obvious villain due to his strict adherence to antediluvian rules that sees him cracking down on such harmless, everyday activities such as enforced groin booting that was adored by the youth of the era. No wonder Dan finds himself in the midst of a small conspiracy with the sole aim of knocking the head from his draconian throne. They've no one to blame but themselves.

To that end, Dan's quickly teamed up with a bunch of 90s gaming tropes. Preemptively obsolete foreshadowing predicts that hell spend the most time with future partner in crime, Ben, who looks at everything through the oft cracked lens of adventure game logic. But the game also heavily references other video gaming staples of the time with the rest of its teenage cast. Lauras the most obvious, who talks about shooting wolves and looting catacombs and how she can get away with carrying firearms around the school because of her familys ridiculous wealth. You might struggle a little to place Jayce to start with as he warbles on about nanomachines, sneaking around vents and general cyberpunkery, but then he mentions he prefers to go by Jay Cee. Its about then you realise that hes probably that one bloke from that other massive game. Its kind of fun to see them sent up and then recast as stroppy teenagers stuck at school, even if their extracurricular activities revolve figuring out how to topple an ultimate authority. At that time of my life, the most creative thing I was capable of was writing my homework in a bigger font so it looked like I had put more work into it than I had. 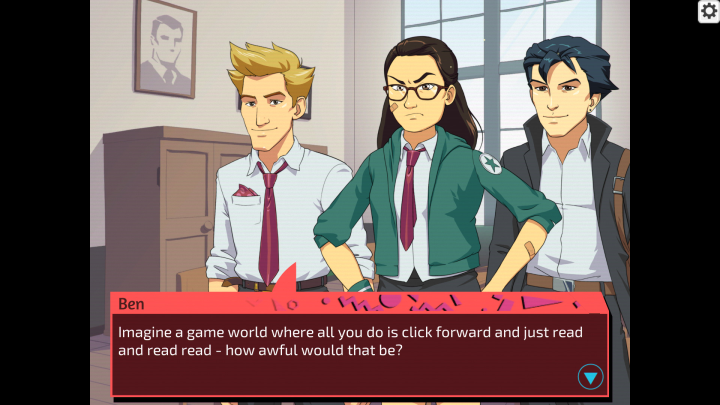 You can part with a small amount of your money in order to be entertained by all this for a small amount of your time. Devils Kiss shouldnt take anymore than half an hour and, while there are different choices to make throughout the novel, the effect it has on the plot is pretty shallow, changing nothing of worth. Its certainly not the worst investment youll ever make. Or, save yourself the entrance fee entirely; the whole thing is bundled in for free should you purchase Lair of the Clockwork God. In that context, its nice to take a break from the depressing hole the pair have dug for themselves in the current year and take a fleeting look back at a more innocent time. Thwart a local tyrant, ignore some classes, share throwaway facts about your first pet just like real kids do.
2.5/5

If you enjoyed this Devil's Kiss review, you're encouraged to discuss it with the author and with other members of the site's community. If you don't already have an HonestGamers account, you can sign up for one in a snap. Thank you for reading!

© 1998-2020 HonestGamers
None of the material contained within this site may be reproduced in any conceivable fashion without permission from the author(s) of said material. This site is not sponsored or endorsed by Nintendo, Sega, Sony, Microsoft, or any other such party. Devil's Kiss is a registered trademark of its copyright holder. This site makes no claim to Devil's Kiss, its characters, screenshots, artwork, music, or any intellectual property contained within. Opinions expressed on this site do not necessarily represent the opinion of site staff or sponsors. Staff and freelance reviews are typically written based on time spent with a retail review copy or review key for the game that is provided by its publisher.