I've never met an Astro Port game I didnt like; if their name is associated with the product, Im all over it. Of course, usually its an old school shoot-em-up that theyre responsible for, but in this case, they've proven themselves no less competent crafting a futuristic metroidvania adventure. Rocketron is very easy to pick up and play, and reasonably engrossing for the short time it lasts; its not anywhere as creative as say, Axiom Verge, nor is it anywhere near as atmospheric as the pinnacle of the genre, Super Metroid, but those are high bars that most games of this ilk also fail to meet.

Rocketron's story is... well... I don't usually do this, but here's what the Steam store page says:

The year is 2049. A mysterious group known as "The Congregation of Gogoh" has incited global insurrection on the cyberhuman planet of Metnal 28 as part of a nefarious plot for world domination. A galactic peacekeeping group that operates under the name "ARGO EXPRESS" has sent a cybernetic warrior known as "B.L.A.M" armed with a new weapon, a "rocket musket", to try and stop them...

Um. So anyway, Rocketron carves out its own identity by equipping our hero BLAM with this rocket musket -- hence its name. Rather than simply running about shooting (literally run-and-gunning), or flying around as one would in a proper shmup, BLAM relies on rather deft touch by the player with the jump button: to rocket straight up, or diagonally backwards, or to hop and hover, as the situation demands. The flying about takes a bit of getting used to, in the way that Bionic Commando's grappling hook did, and similarly, in the end it's a nice mechanic which makes the game feel different from anything else Ive played in the category. 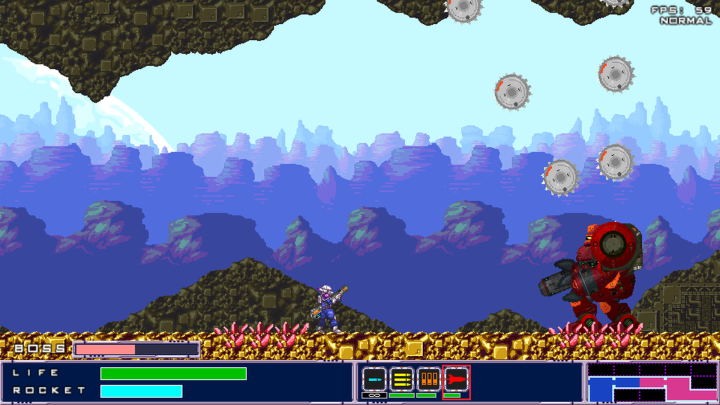 There are precious collectibles hidden around the world that you'll need to find and allocate towards powering up your numerous guns, which themselves are found along the beaten path. From the main rifle, to a shotgun, to a homing shot  there are a lot of options for doing grievous bodily harm and your playstyle will dictate which you choose. I preferred to concentrate on juking and jiving and enjoying to the utmost the maneuverability the rocket rig brings, so I spent my currency on powering up the homing gun all the way as my priority. That way, I could focus on dodging while my bullets did their thing in powerful, nearly autonomous fashion. But you might decide instead to go all in on the shotgun, which when powered up resembles the spread gun from Contra both in appearance and overwhelming efficacy.

Rocketron offers fairly interesting alien and robotic enemies and decent backdrops and sounds, but nothing incredibly memorable. Cool foes and striking backgrounds and sounds obviously help elevate any game, but in the lonely, necessarily repetitive grind of a metroidvania, those ingredients seem of even greater importance in setting a proper atmosphere -- to maintain the feeling of dread and awe and isolation which helps keep at bay the nagging feeling you're traversing the same hallways over and over -- and Rocketron does a merely decent job of this.

The game is also quite short and easy on both the easy and normal difficulty levels, which helps mitigate the repetition and any encroaching feelings of indifference; but that also harms the final product by making it feel like a disposable romp. If youre a veteran of the genre, Id suggest starting off on hard so you don't feel as if you're literally flying through. Otherwise, youll cruise through a relatively interesting Super Metroid-lite adventure in under four hours and you wont give it a second thought thereafter, which is a shame, because Astro Port has made a perfectly enjoyable adventure with a cool jetpack gimmick which probably deserves your attention. That you'll soundly beat the game before your interest wanes is both its gift and its curse.
3.5/5

If you enjoyed this Rocketron review, you're encouraged to discuss it with the author and with other members of the site's community. If you don't already have an HonestGamers account, you can sign up for one in a snap. Thank you for reading!

© 1998-2020 HonestGamers
None of the material contained within this site may be reproduced in any conceivable fashion without permission from the author(s) of said material. This site is not sponsored or endorsed by Nintendo, Sega, Sony, Microsoft, or any other such party. Rocketron is a registered trademark of its copyright holder. This site makes no claim to Rocketron, its characters, screenshots, artwork, music, or any intellectual property contained within. Opinions expressed on this site do not necessarily represent the opinion of site staff or sponsors. Staff and freelance reviews are typically written based on time spent with a retail review copy or review key for the game that is provided by its publisher.