As a synopsis, Wizards & Warriors doesn't sound all too original. You're a knight and there's a princess in a castle that needs saving. You will cross forests, through caves, and tackle the castle itself, doing so while countering countless eagles, bats, spiders, skeletons, and flying demons using an assortment of weapon upgrades and enchanted abilities. Pretty straightforward fantasy setting, especially one structured as a side-scrolling platformer. Even its gimmick doesn't sound particularly invigorating; at the exit of each stage, and in some cases each section, an impenetrable knight blocks the door. The solution? Bribery! You must thoroughly traverse and investigate every area, each one quite spacious, to collect a certain amount of gems as "payment."

Basically, Wizards & Warriors is a collect-a-thon. Developed by Rare. Surely this studio didn't run the concept straight into the ground with future titles. 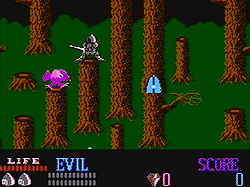 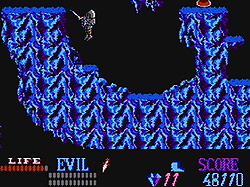 However, that potshot isn't the main issue with this outwardly innocent and basic game. For their second NES outing, Rare decided to make Wizards & Warriors gruelingly difficult in the most ridiculous way possible. Each stage has the same flow: you platform jump around a large map to collect gems, through color-coated doors that require color-coated keys, and against... several... enemies."Several" is quite the understatement, as the game likes to spawn said foes infinitely. There are plenty of games out there with infinite-spawning enemies that are fine and playable. This isn't one of them, and it really comes down to how it performs this feat.

On an almost second-by-second basis, something pops into frame to attack your knight. If these were only just enemies charging in on surfaced areas, this wouldn't be such an issue. Unfortunately, the devs apparently really, really liked airborne opponents, as you'll have a winged creature or demon constantly coming towards you, while phasing through solid matter, from awkward corners of the screen; take one down and you almost immediately have to contend with another, trying to align your attacks to their "current" position as they zone in to yours. Making things worse, their tracking capabilities have a "rubberband" gravitational pull. When you're trying to go in for the kill and miss, mostly due to the enemy's small stature, they'll sling back around your character like a boomerang, making combat harder than it should be.

This makes platform hopping an absolute pain. Jumping isn't the most responsive thing due to its weighted feel, but then there's also the fact that trying to land on small platforms can be nerving, especially since traveling upward in stages can last over a minute. It's doable on its own, but becomes an annoying "task" when tackling the obnoxious horde of bugs and monsters. One simple mistake is all it takes to fall and lose a sizable lead, or in a more dreadful scenario, flop to the very bottom. Thankfully, this game didn't go for one-hit deaths, instead opting for a health meter and lives that revive you on the spot. But even with that "positive," the game is like a vampire sucking your life force with every step forward through the absurdity; a game where projectiles attack from off-screen; a game that, after defeating annoying bosses where a tiny portion of your health remains, decides to end boss encounters by hitting your knight with a literal gang of bats as a final middle finger. 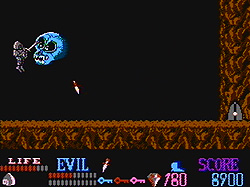 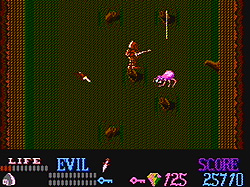 If this was another game, everything mentioned would be enough to damn Wizards & Warriors as a flawed release with goofy design choices. However, there's one particular oddity that makes the game's ruthless structure questionable. Wizards & Warriors has a continue system. It has a continue system that spawns you back to where you died, with a full health meter and life set. It does this without any loss of progress to items collected and doors unlocked. You have infinite retries with this continue system. That leads to the question: what's the point of intentionally making a masochistically-designed game only to downplay its significance with such an inclusion?

Wizards & Warriors is a frustrating experience, but becomes even more frustrating once you realize how unnecessary it is.
1/5

If you enjoyed this Wizards & Warriors review, you're encouraged to discuss it with the author and with other members of the site's community. If you don't already have an HonestGamers account, you can sign up for one in a snap. Thank you for reading!

© 1998-2020 HonestGamers
None of the material contained within this site may be reproduced in any conceivable fashion without permission from the author(s) of said material. This site is not sponsored or endorsed by Nintendo, Sega, Sony, Microsoft, or any other such party. Wizards & Warriors is a registered trademark of its copyright holder. This site makes no claim to Wizards & Warriors, its characters, screenshots, artwork, music, or any intellectual property contained within. Opinions expressed on this site do not necessarily represent the opinion of site staff or sponsors. Staff and freelance reviews are typically written based on time spent with a retail review copy or review key for the game that is provided by its publisher.