Neon Aileron is up front with what it's set out to achieve: a forgiving, non-bullet hell horizontal shoot-em-up with a 16-bit aesthetic and bad guys who spawn to the beat of the music. If you're old school -- or just old -- I can't imagine that this sounds anything other than irresistible. But my clever teaser has already told you that the game didn't quite succeed. It's forgiving sure, but it's too easy, even on the hard difficulty. The bit about the enemies spawning to the music? Yeah, I didn't even notice that was a thing. What I did notice is that enemies just up and materalize on the right of the screen quite suddenly, which is definitely more annoying than cool. But hey, ancient gamers simply must revel in any game done in the olde style; I enjoy the rarity that is any shooter not dubbed a bullet hell and presented in top down format.

The first thing I thought of when I saw Neon Aileron screenshots is that the general look of the game feels like a cross between Bio-Hazard Battle, an old Sega Genesis favourite with decidedly strange and alien enemy designs; and Insector X, a Sega Genesis not-so-favourite featuring giant robot insects as the bad guys. So Neon Aileron looks kind of weird and features insect foes. Neither is a bad thing, nor is the fact that the developers made a game title that rhymes with aileron. Hell, full marks for using that word at all. 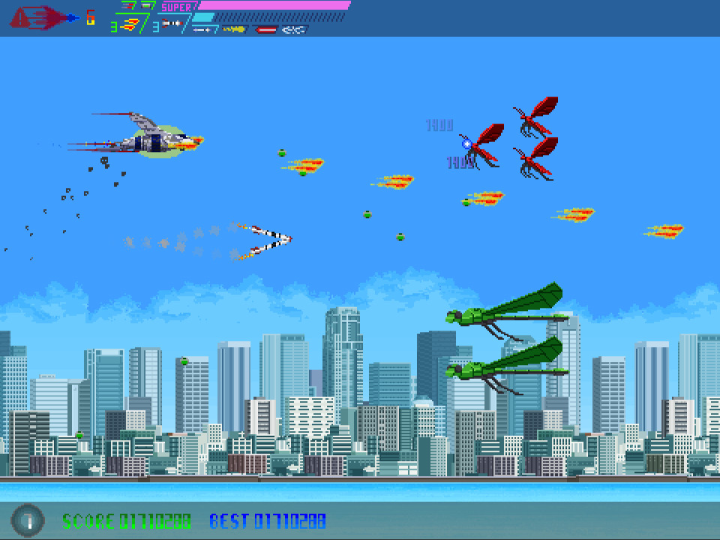 The nuts and bolts aren't quite so cool or sexy, but they do the job. You've got four pilots to choose from, each with their own unique-looking craft and special weapon. In general though, you've got your regular shot and twin missiles, each of which can be powered up twice. Level three shots are a rapid stream of red pellets, and level three missiles are homing death and are actually more effective and valuable than the primary gun. Again, while the special weapon varies by character, it usually involves high powered beams and more missiles -- essentially the kitchen sink. Naturally, the effect is temporary but it's usually enough to halve a boss's life, making it a prudent decision to save the one you have per level until the WARNING sign flashes on the screen to alert you to the guardian's arrival. Bosses are pretty neat, often constructed from different segments that require destroying piece-by-piece, while shooting other segments is optional.

Your ship, whichever one you choose, is built to take multiple hits before going down; a blueprint-like picture on the HUD shows you which part of the ship has sustained damage. Picking up wrench power ups restores those damaged areas. By the developers' own admission, enemy bullets aren't overwhelmingly plentiful, and I never found them difficult to dodge. I took more damage crashing into foes who cheaply appeared in my midst when I foolishly flew strayed too long on the right side of the screen than I did under their fire. Normal mode offers us seven levels and will most certainly be too easy for fans of the genre with even a modicum of experience; for context, I managed to 1cc the campaign in under 30 minutes on my very first run. The hard difficulty provides an eighth, and final level, so you may as well go straight to it so that completion reveals the true ending. 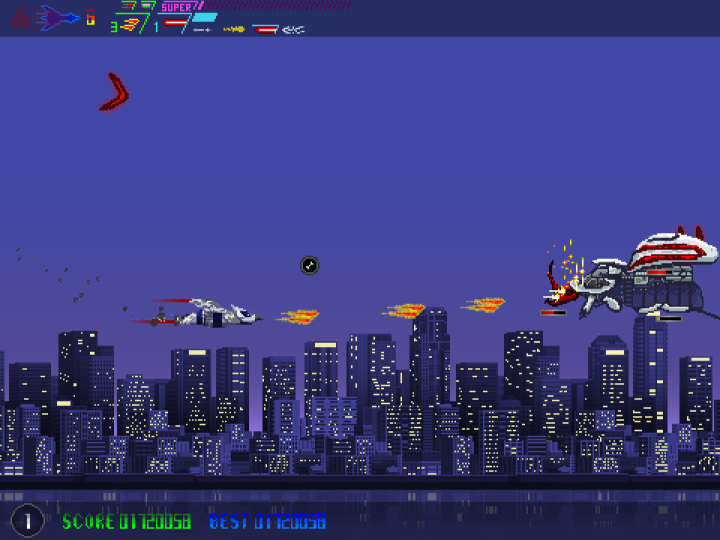 Neon Aileron is a bit strange, and a bit short, and quite a bit easy. Despite its oddness, it simultaneously manages to be dull and generic, and I'm sure its lack of challenge has something to do with that. There is a standout moment in level six's LIGHTENING STORM. The misspelled mission name brings to mind the classic shooter, Lightening Force -- perhaps this was no accident? The level does its best to channel greatness, to live up to the name: boasting an ominous track, great lightning effects and cool scorpion enemies. While the scorpions infuriatingly fire hard-to-see dart-like projectiles which do their best to piss you off, the very good music here buoys the experience.

That's probably the best thing about Neon Aileron on the whole, in fact. I'm always pleased to report on excellent shmup scores, and the tracks on offer here are remarkable given the quality of the product as a whole. So while I didn't notice the enemies appearing in rhythm as advertised, the sounds are absolutely notable. The tunes have a weary melancholy reminiscent of Super Nova (a forgotten not-quite-gem in the Darius canon for the Super NES). Most tracks here have some light synth going on as hypnotic accompaniment, often with a flute or soft keyboard plinking away a somber melody over top. The tracks colour how I felt leaving the game behind: a little sad that this throwback was a victory of screenshots and tunes, and an underwhelming, disposable once-through in the same breath.
2.5/5

If you enjoyed this Neon Aileron review, you're encouraged to discuss it with the author and with other members of the site's community. If you don't already have an HonestGamers account, you can sign up for one in a snap. Thank you for reading!

© 1998-2020 HonestGamers
None of the material contained within this site may be reproduced in any conceivable fashion without permission from the author(s) of said material. This site is not sponsored or endorsed by Nintendo, Sega, Sony, Microsoft, or any other such party. Neon Aileron is a registered trademark of its copyright holder. This site makes no claim to Neon Aileron, its characters, screenshots, artwork, music, or any intellectual property contained within. Opinions expressed on this site do not necessarily represent the opinion of site staff or sponsors. Staff and freelance reviews are typically written based on time spent with a retail review copy or review key for the game that is provided by its publisher.