The Titan Corporation are taking over, crushing any who stand in the way of their "their unstoppable, steamrolling expansion." But they've messed with Troy, a "simple mechanic," who is somehow able to make battle-ready an 'old jet' he has lying around in his garage (as you do). Well -- Titan messed with the wrong mechanical genius-cum-ace fighter pilot! And now... one man... will stop at nothing... to make things right... Okay: flimsier-than-usual shooter story aside, I see where they were going with Reign of Bullets, I really do. Give us a side-scrolling shoot-em-up with retro looks and todays accessibility, and what could go wrong? More things than I thought possible, as it turns out.

First of all, the game's title is a major misnomer; but I guess Cram As Many Guns On Your Ship As Will Comically Fit doesnt quite have the same ring. So no, the game isnt about requiring insane dodging abilities; its nothing close to a bullet hell outing, if that's what you were hoping for. Instead, the theme here is collecting dropped currency towards buying weapon slots for your ship, and then equipping those slots with as many guns as you can. In the vein of the Sky Force series and other current generation approaches to the genre, you can grind, RPG style, with a view to making your ship so OP'ed as to mitigate any lack of skill. 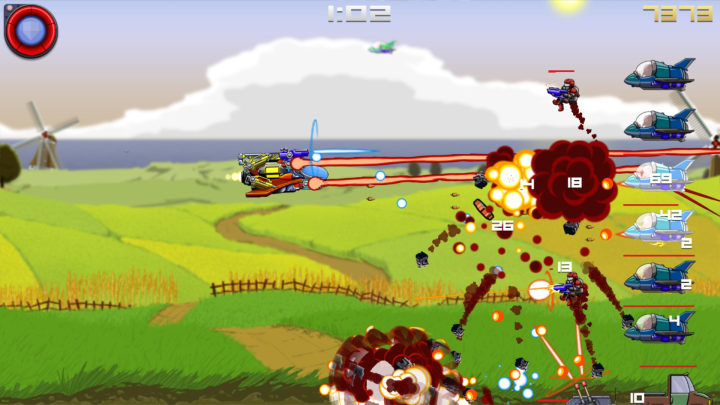 The many, many guns will be found randomly within the levels, and range from flamethrowers to rocket launchers to laser beams. Get far enough into the game and you may as well rename your ship, The Kitchen Sink. And youll need every bit of that firepower as you go along -- not because there are diabolically programmed waves of enemies spewing impossibly numerous projectiles for you to navigate -- but because the further you go the less damage your weapons will do. So youll need more and more of them attached to your ship as well as the more obvious requirement that you modify and improve them as well.

In addition to finding money within the levels from downed enemies, end-of-level summary reports will announce newly amassed bonus cash and parts. Then you're whisked away to the hangar, where you can sell off anything in your inventory that you don't want. If all the buying and selling and customizing and workshop fiddling sounds fun, know that it isnt. Grind fests already feel slow, and the between stage tinkering slows things down even more. Worse yet, Reign of Bullets is another one of those modern shooters where each area is broken into multiple repetitive waves of action (here, 10, because, why not?). 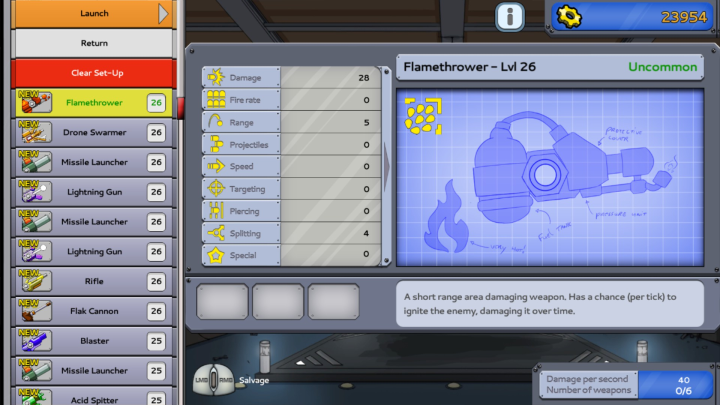 So thats 10 times over that youre seeing the same uninspired backdrop and enemies. Thats 10 trips to the hangar to adjust this and that, to pawn this and that, to equip this higher rated version of that gun, to check if youve saved enough for those missiles you always wanted -- all in an effort to make sure your ship doesnt feel unfairly underpowered as you progress through an uninspired campaign at a positively glacial pace.

I probably got it wrong earlier; Reign of Bullets really wants to be known as Super Shop Customization Alpha Plus, and it does its best to get bogged down in its own gimmick. It ultimately feels like a fighter jet manager with a dose of generic shooter thrown in for good measure, and Im almost certain thats not what you want in a shmup. At no point does the game feel intense or exciting -- stages feel like rote, bare bones, drawn out exercises that you must get through (10 times!) in order to perform well enough to manage yourself into a position where you can perform as well later on. Its all a bit of a chore and a bore and youd be better served playing any number of the other bargain retro shooters on Steam than this one.
2/5

If you enjoyed this Reign of Bullets review, you're encouraged to discuss it with the author and with other members of the site's community. If you don't already have an HonestGamers account, you can sign up for one in a snap. Thank you for reading!

© 1998-2020 HonestGamers
None of the material contained within this site may be reproduced in any conceivable fashion without permission from the author(s) of said material. This site is not sponsored or endorsed by Nintendo, Sega, Sony, Microsoft, or any other such party. Reign of Bullets is a registered trademark of its copyright holder. This site makes no claim to Reign of Bullets, its characters, screenshots, artwork, music, or any intellectual property contained within. Opinions expressed on this site do not necessarily represent the opinion of site staff or sponsors. Staff and freelance reviews are typically written based on time spent with a retail review copy or review key for the game that is provided by its publisher.