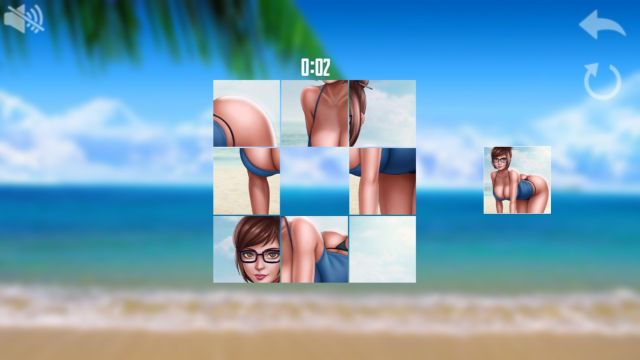 I opened my HG mail the other day, and someone left me a horrible, demeaning, disgusting piece of work to review. I saw the title and knew right away it was going to be one of those games. I was appalled to think anyone would create such a thing, and that others would potentially enjoy it. Honestly, I'm not one to go on a crusade to ban almost anything, but I think there's one kind of game that should cease to exist for the good of humanity.

I speak, of course, of sliding puzzle games...

Let's say I were to rank the different puzzler subgengenres. Puzzle adventures would sit at the top of this hill, with many arcade-style puzzlers (Tetris and Dr. Mario) and Picross products taking up the next few tiers. But aaaaaaaaaallllll the way at the bottom of the hill, somewhere in a drainage ditch where all the runoff, castaway garbage and dead vegetation ends up, lies the sliding puzzle genre, wallowing in the filthy water that pools there. It awaits any unfortunate critics tasked with reviewing them, clamps its jaws shut on their legs and drags them to a horrible, dirty, drowning death.

One of such creature is the delisted anti-delight Sexual Puzzle, a collection of sliding puzzles with pictures depicting scantily clad anime girls, some of whom sport ridiculously oversized bosoms. The objective is pretty simple: complete a sliding puzzle and you get to gawk at the picture it "hides." 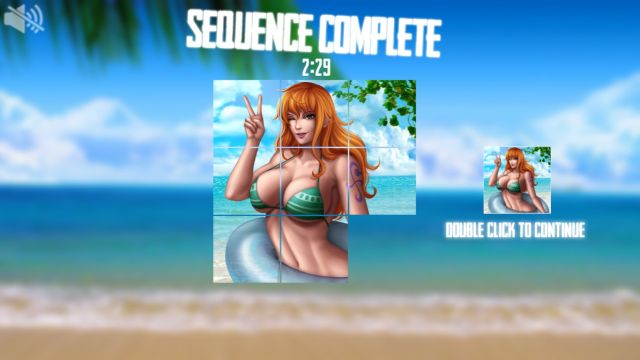 I put that last word in quotations because the solved picture is already sitting on the right side of the screen for you, as if to mock you for foolishly wasting time on a series of sliding puzzles. This feature renders the effort of suffering through such a tedious game almost meaningless. Thankfully, completing a challenge takes you to further puzzles with different girls in a variety of poses, so there's at least some incentive to keep playing.

Above all, the pictures on offer are actually well drawn, so even if you're not planning on having a tug-o-war with the ol' cyclops over this one, at least you can admire the art. However, wonderful visuals only carry a game so far, and it's a shame to see them wasted on such a dull, laborious, unimaginative genre as this one. I mean, there are countless casual genres the developer could've choosen to house a partially nude gallery, but they selected the most boring of all. Even a standard matching game, where you flip over cards to match symbols, would've been a better choice than this.

Let's address one more elephant in the room, shall we? This is called Sexual Puzzle, and yet it doesn't offer any actual nudity. Personally, I'm not big on erotic games (though I do dabble in that realm occasionally), but were I in the market for a puzzler that calls itself "sexual," I would want the title in question to go for broke. It's really not that hard to hit up Google Image or tons of other online galleries to see all the sexy people and lewd anime chicks you could ever want. If you're going to force your audience to suffer through sliders, you may has well provide them with rewards that aren't practically all over the internet. 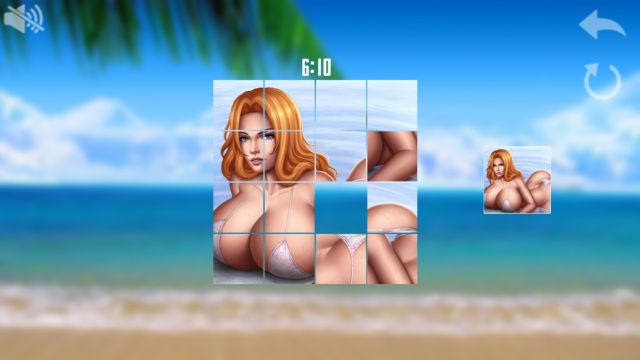 I can't tell you to avoid buying Sexual Puzzle because it's no longer on the market. Instead, if by some horrific chance it ends up in your library, just ignore it. Even if you're into games of this nature, you can easily find mountains of ballsier and bustier titles that utilize genres superior to the dreaded sliding genre.
1/5

If you enjoyed this Sexual Puzzle review, you're encouraged to discuss it with the author and with other members of the site's community. If you don't already have an HonestGamers account, you can sign up for one in a snap. Thank you for reading!

© 1998-2020 HonestGamers
None of the material contained within this site may be reproduced in any conceivable fashion without permission from the author(s) of said material. This site is not sponsored or endorsed by Nintendo, Sega, Sony, Microsoft, or any other such party. Sexual Puzzle is a registered trademark of its copyright holder. This site makes no claim to Sexual Puzzle, its characters, screenshots, artwork, music, or any intellectual property contained within. Opinions expressed on this site do not necessarily represent the opinion of site staff or sponsors. Staff and freelance reviews are typically written based on time spent with a retail review copy or review key for the game that is provided by its publisher.