Theres no sane way to talk about a SUDA51 game. Theres no essay structure or review template you can employ to try and make some sense out of the unapologetic style-over-substance oddities Grasshopper routinely dump on gamings plate before looking ridiculously smug at every shred of spectacle thats choked on. Despite often finding itself the forgotten child, Killer is Dead is no different. As a hack and slash game, its all pretty simplistic and you can probably get through most of it by mashing the attack key mercilessly. It doesnt have to be so trite; there are sub weapons and timed counter attacks and finishing manoeuvres. You can dodge a wayward slash, slide away from a barrage of artillery then trigger an adrenaline burst to surge across a room and slice an enemys torso in two. Or you can just wear down the X button on your gamepad. The point being, all that combat is just an excuse to get you from one massively decedent plot point to the next. Its best not to think about it too hard.

So lets talk about your first mission. I mean, not your first mission; this is the third chapter, but one of the previous tasks was merely hunting down a cross-eyed lunatic with a biological machinegun grafted to his arm, while the other was the elimination of the person whose job youve just taken. You jump him in a restaurant, have a poetic exchange about the ills of letting darkness seep in, then stab him three million times before he casually saunters off to enjoy a glass of wine. No, none of those. The third one. Which is also the first one. Try to keep up.

Interior: house boat. Game protagonist, Mundo, gazes out of a porthole as a simple rowboat drifts lazily into view. Although its not close enough to concern any of their details, there are two people on board. Despite this distance, with a casual flick of their wrist, one boatman throws something which momentarily attaches itself to the glass. Its a contract of employment. Despite this being an apparent document of worth, Mundo shows no concern as it peels away from the porthole and drops into the ocean. Instead, he turns to a pyjama-clad girl to inform her that he has the job, but she doesnt have the job because she failed, but she has a job anyway because something. The girl shifts jarringly between temper tantrums and hyperactive satisfaction. The scene ends. Weve learnt nothing. 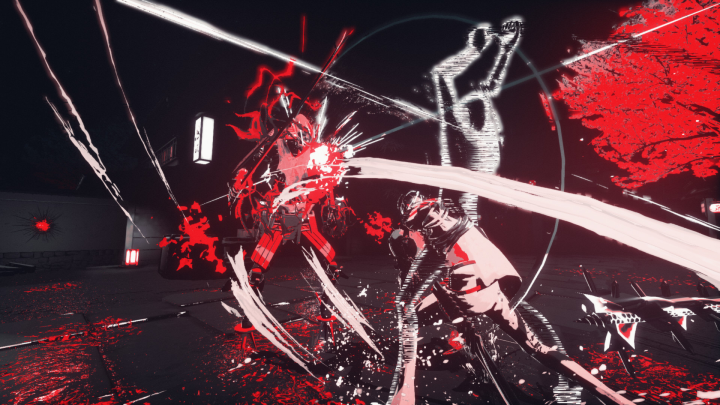 The two are in an office. They are lightly chastised by a ridiculously attractive blonde girl while Final Fantasy VIIs Barret sits silently chomping on a cigar. Except hes absolutely not Final Fantasy VIIs Barret; hes just a barrel-chested black guy with strikingly similar cyborg augmentation. No, this is Killer is Deads Bryan. You can tell, you see, because he wears a big gold chain with a BRYAN plate attached. Just so you dont get confused. They are there to wait on what will be Mundos first client, but the stealthy little fellow has been there the whole time.

We meet Robert, the artist. This is how he introduces himself. Hes a soft-spoken fellow wearing a fruity beret, and hes a wee bit concerned about the fact he lives next door to a monster that keeps killing people. Everyone sits quietly while he produces a number of charcoal sketches of a giant spider creature while Bryan gets unreasonably angry about the concept of speculation and not that hes lost all his materia. They talk about screaming children and blood splattered windows for a bit, everyone agrees its a monster (individually confirmed as they go round the office which each person saying its a monster, just in case you didnt catch that bit) and a contract is signed. Mundos first job is official.

Attractive Blonde takes the pair to Roberts neighbourhood on her motorcycle, where they all chat about how its super quiet but especially smelly. Mundo fixes his hair, says his arbitrary catchphrase (Killer is dead. I mean, theyre not. Hes not even seen them yet. But why let facts get in the way of a good catchphrase read?) and enters the monsters house. For the first time in the mission, hes placed under the players direction. You could abuse your new found control and surge onwards but, should you detour slightly and climb some nearby stairs, youll have your first encounter with Scarlett. Shes a magical nurse specialising in blood transfusion, which is handy considering all Mundos sub-weapons are powered by blood. You can find her hidden around the majority of levels where shell not only top up your blood supply, but unlock special challenges selectable outside of your missions. Completing these challenges will slowly fill you GUTS meter and, should you top that up, then youll have the chance to woo Scarlett with random gifts and solid eye contact (though, to score big points, openly gawp at her breasts every time she looks away). Win her over, and shell shed her skin-tight latex nurse uniform, and writhe at you in such a fashion that the upstanding folk at PCWorld.com branded the game a sexiest, garbled mess. Because it is the current year, dont you know? 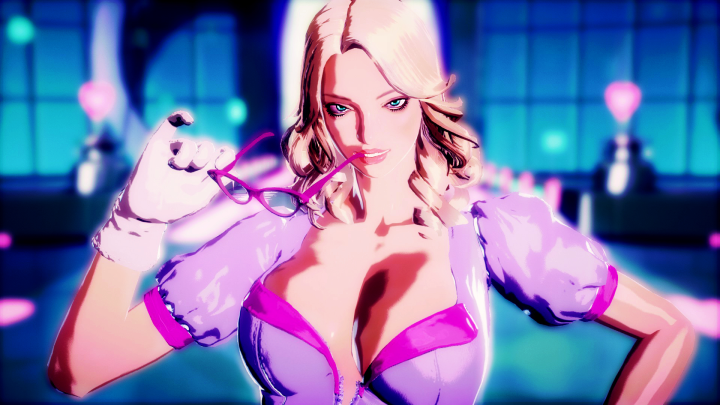 Ignore or engage Scarlett, youll still eventually find yourself in a homey living room occupied by Alisa, a timid girl in a blue and white dress. Shes frightened because her older sister, Alice, has been influenced by a bad man and lost it. Mundo promises to help. Theres nowhere to go but back, so he tries to return to Scarletts hallway except thats gone now, replaced by a room filled with impossible architecture, ceramic cats and Penrose stairs. 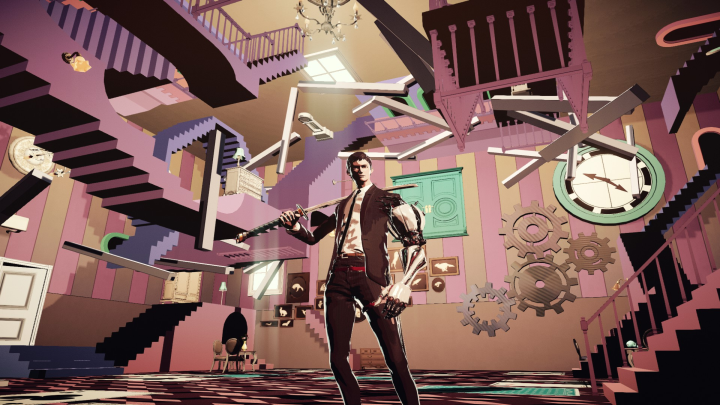 In an attempt to bring a belated sense of brevity to this word salad of a review, Mundo goes into a series of rooms wherein he either solves a basic puzzle or takes on a contained battle which serves to highlight that someone at Grasshopper has read Alice in Wonderland at some point. Each cleared room allows a piano-key stairwell to be sluggishly constructed, eventually allowing you access to the main chamber.

This last room is constructed of candy, with load-bearing doughnuts and decorative gingerbread men aplenty. In the middle of the room sat upon a strawberry éclair sofa waits Alice. Except, hang on; thats not Alice at all  its Alisa. Except thats not right either; Alisa was Alice all along! What a twist! The weight of the revelation triggers something in AlisAlice who undergoes a genuinely disturbing metamorphosis and youre forced to battle not only the deranged blood-hungry monster, but your own feelings of guilt for being unable to save the girl. You fight, lopping of limbs with every successful exchange and avoiding insectile larvae formed in the likeness of Alices anguished face. They mimic her sorrowful scream every time you put one down. Assuming you prevail, the victory is bittersweet. You bid Alice to finally rest inside her candy house. Killer is dead. 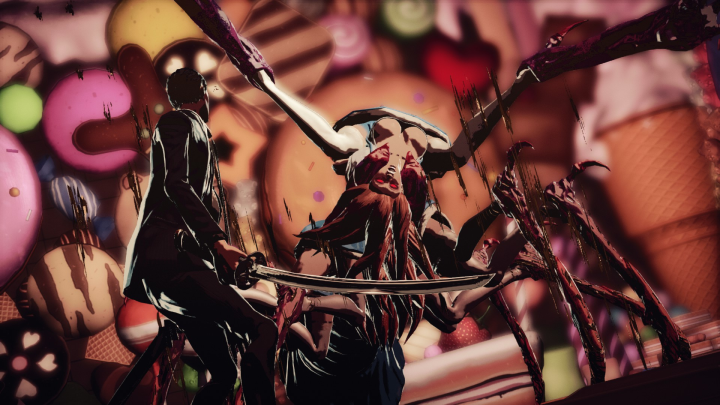 Robert (the artist) is given Alices head to prove the contract has been completed. He nods knowingly. Yes, thats her, he says. Thats the woman who killed me. He then vanishes in a puff of bright white light, proving that someone at Grasshopper has also seen The Sixth Sense. Chapter Three will take you about half an hour or so to see through, beginning to end. Youll spend, at most, about five minutes actually playing; the rest is all exposition.

Thats how Killer is Dead rolls. Many people will muddle through the opening stages, and find themselves put off by any number of things. The low focus on actual gameplay, the bizarre oddity surrounding the entire experience or, like the fragile fellows at PCWorld.com, the unapologetic influence of boobs. Its not the kind of game youll engage in because youre enraptured by the combat, desperately seeking the next ridiculous combo or overpowered surge. If the game grabs you, its because you need to know what its going to try and do next. Maybe present you with a super-villain music mogul ghoul (mo-ghoul!), who you can only hear through a special set of headphones made out of stolen ears, who will continue his villainous monologue regardless if youre wearing them or not. Maybe youll chase down a tiger-riding samurai on the back of a motorcycle or try to reason with a sentient steam trains emergent sense of obsoleteness. Maybe youll met a sexy vampire who sends bats to spy on you if you stay out of contact long enough and try to seduce her with a stick of gum. See where that gets you.

Its all purposefully ridiculous spectacle, but its not without moments of sheer brilliance. In the middle of one boss fight, the camera resigns from being all third-persony and instead shifts directly to the villains perspective, showing her personal view of you trying to dodge her attacks and stab her in the face directly. But making your way to that boss fight is tediousness defined; Mundo has to reach her by walking through a series of islands while pathways slowly emerge from murky waters. Theres very little to do during the exploration stage; there are no minions to cut down, no secret paths to discover, no scenery of note to look at. Then, right in the middle of it, youre alerted to the possible existence of a space unicorn. Therein lies the perfect Killer is Dead analogy because while there are often little moments of grandeur liberally scattered throughout the game, its surviving the often exhausting trudges towards them that will test you the most.
3.5/5

If you enjoyed this Killer is Dead - Nightmare Edition review, you're encouraged to discuss it with the author and with other members of the site's community. If you don't already have an HonestGamers account, you can sign up for one in a snap. Thank you for reading!

© 1998-2020 HonestGamers
None of the material contained within this site may be reproduced in any conceivable fashion without permission from the author(s) of said material. This site is not sponsored or endorsed by Nintendo, Sega, Sony, Microsoft, or any other such party. Killer is Dead - Nightmare Edition is a registered trademark of its copyright holder. This site makes no claim to Killer is Dead - Nightmare Edition, its characters, screenshots, artwork, music, or any intellectual property contained within. Opinions expressed on this site do not necessarily represent the opinion of site staff or sponsors. Staff and freelance reviews are typically written based on time spent with a retail review copy or review key for the game that is provided by its publisher.