Someone figured out that shoot-em-ups are easy to make -- in relative terms -- and so lend themselves to indie efforts. But the genre is on life support and is super niche at this point not just because the games aren't 3D and hyper immersive (you won't confuse R-Type with Red Dead Redemption 2), but because they're historically hard. Difficult shooters are a turn off for the casual gamer. Someone else seems to have figured out the obvious workaround.

Make 'beginner shooters.' Enter AngerForce: Reloaded, another in a line of accessible, Learn To Play vertical shooters Ive come across of late. Putting aside the hackneyed premise (rise of the robots!), and avoiding any direct comparison with the exceptional tour de force that is Jamestown +, it does most things right, and is certainly a lot better at what it sets out to do than the relatively, and comparatively pedestrian Sky Force Reloaded and its canon.

In keeping with the Sky Force comparison: both games have lush, carefully rendered, attractive visuals; fairly good scores with a few real standout tracks to shoot along to; and both games require repetition, both for you to learn the levels, and for you to earn enough scratch towards powering up your ship. Its the approach of the everyman shooter, so that, even if you're not especially skilled, you can embrace the grind and see success. Your stubbornness can be the great equalizer! And this is where the comparison should probably end. 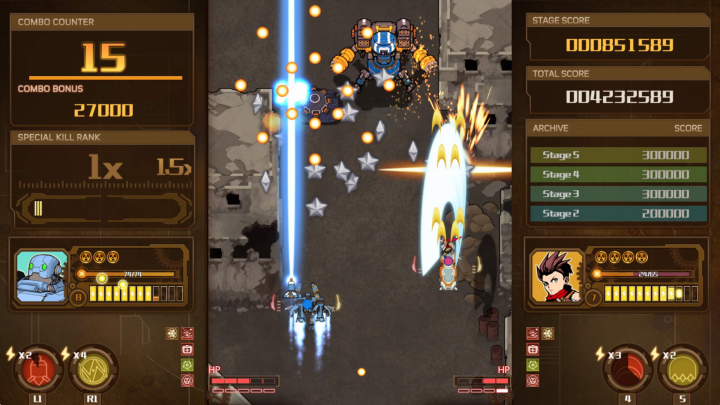 Because while Sky Force has you replaying the same level over and over in order to achieve a different objective while banking currency and improving at the game at large, AngerForce has you taking multiple runs at its campaign. First, there's the Noob run, through which only three levels are available. Beat Noob and unlock the Normal run, which provides five levels. Veteran unlocks a sixth, and seventh, final stage and Expert, while not offering up any more stages, simply ramps up the difficulty, ostensibly to the level that was always intended.

The game had me hooked with its approach to repetition, asking me to get better in order to see more. I genuinely enjoyed scaling the difficulty ladder for the most part. That said, the invitation to take on the expert run will likely be a bridge too far for most, as I know it was for me. Again, with Expert, theres no more cool content, just a lot more bullets, and a lot more death. Perhaps this would be a good starting point for a bullet hell ace to begin with, rather than risk burn out wasting time on modes that are too easy to be exciting. 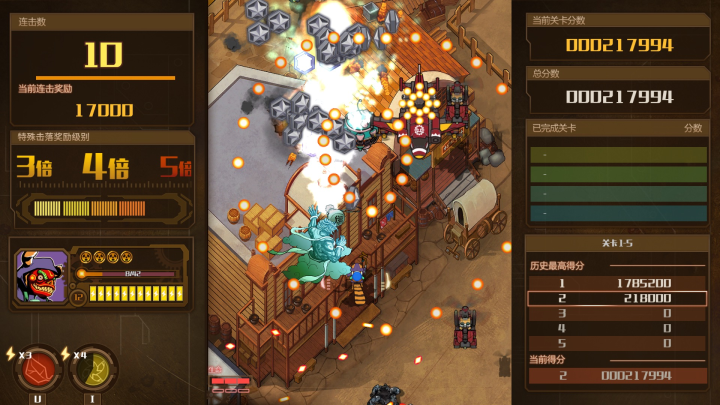 If its developers truly did have 'An Intro to Shooters' in mind with this project, then AngerForce does its job well. You are always learning, always improving your skills, always improving your ship and your chances. Even on failed runs on the campaign you are racking up that buying power towards getting stronger; the post-fight summary page doubles as an update shop, offering an opportunity to inject some strategy and some personalization into your progression. Do you level up your primary weapon? Do you decrease the time it takes for your secondary weapon to charge? Do you increase the amount of life-saving bombs your ship can carry? It's up to you.

Similarly, there are four pilots to choose from, each with their own style and craft capability. Naturally, this is not a one hit and you're dead type of shooter -- that would go against its presumed newbie shmup identity. But some characters sport larger vitality bars then others; some have greater offensive capabilities than others. The girl (you know, with the boobs) has a rather anemic vitality bar but deals crushing damage. The robot (yes, a traitor is in our midst) allows you to take more than twice as many hits as the girl does (it will take five to put him down), but his arsenal isnt anything to write home about. 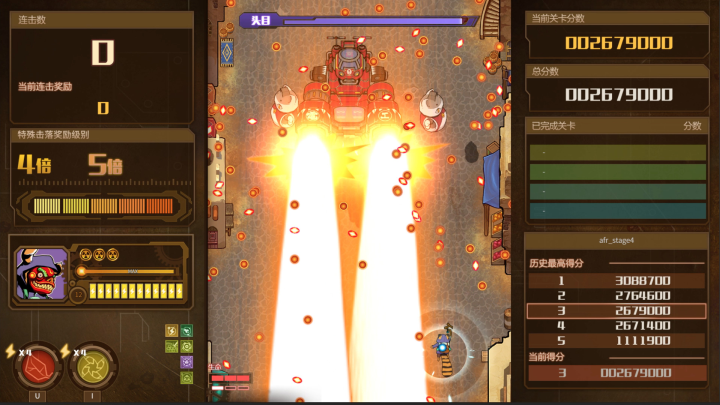 Even in the way the game presents character movement, there is choice. Hold the left trigger and move about slowly, enabling proper bullet slipping, which is especially useful during boss confrontations. And it is only during this focus mode that you can fill your secondary weapons meter. Or hold the right trigger for maximum speed and maneuverability. You also have the choice to hold neither trigger to achieve a velocity which is somewhere in between. Again, the decision is yours.

I might be so bold as to say that AngerForce might be the ideal beginners shmup. It's not perfect: your 'mission' on the whole feels underwhelming, and while seven levels is normal for the genre, these days you need more to stave off that disposable feel: more modes, more content. And if it matters to you, its not always a bullet hell -- sometimes it has you dodging fast bullet swaths wholesale like a Raiden title. And it isnt as pretty as Jamestown +, nor does it sound anywhere near as good, nor does it feel anywhere near as epic, but it's easier and allows for the sort of customization which permits every gamer to feel comfortable.

Play enough times on Noob and then Normal, and rack up sufficient dough to extend your vitality bar, or power up your guns. Move quickly during levels to clear the screen, and move slowly during bosses to dodge intimidating bullet patterns carefully. Drop bombs from your expandable cache in a pinch, and take solace in the fact that, if all else fails, you can take a few hits before cashing in your chips. AngerForce: Reloaded is as easy or as hard as you want it to be, and at every turn it feels right. It certainly has its own distinctive steampunk style-cum-cartoonish swagger which draws you in, but its greatest strength is how well it can work for everyone.
4/5

If you enjoyed this AngerForce: Reloaded review, you're encouraged to discuss it with the author and with other members of the site's community. If you don't already have an HonestGamers account, you can sign up for one in a snap. Thank you for reading!

© 1998-2020 HonestGamers
None of the material contained within this site may be reproduced in any conceivable fashion without permission from the author(s) of said material. This site is not sponsored or endorsed by Nintendo, Sega, Sony, Microsoft, or any other such party. AngerForce: Reloaded is a registered trademark of its copyright holder. This site makes no claim to AngerForce: Reloaded, its characters, screenshots, artwork, music, or any intellectual property contained within. Opinions expressed on this site do not necessarily represent the opinion of site staff or sponsors. Staff and freelance reviews are typically written based on time spent with a retail review copy or review key for the game that is provided by its publisher.