Enemy Mind is a horizontal shoot-em-up built around a great gimmick that is ultimately wasted on a ho-hum game. The only good news first: as always, youll start off piloting a generic space craft, firing away at alien ships. But! As those enemy ships swarm and descend upon you, youll have the option to ensnare them with the press of a button, and take them over, leaving your old lifeless husk behind.

How awesome is this?!

Ive played shooters for decades, and in all my years championing the genre, I dont recall coming across this particular gimmick before, and that frankly, in the present, comes as a shock.

Mind you, Ive seen variations on the theme: the Sega Genesis hit Gaiares permits us to capture enemy weapon loadouts for our own use. G-Darius, for the original Playstation allows us to capture enemies for use as auxiliary sentries. But commandeering enemy craft wholesale for use against their own buddies? Why did it take someone so long to do this? And why, once someone did, did they do it within this feeble framework? Who knows. 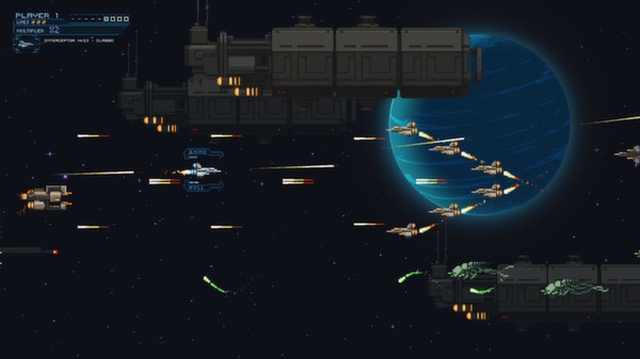 Enemy Mind offers eight stages, which is pretty standard for an old school shooter. But, in keeping with modern trends, each of those stages besets you with waves in order to spoon feed progress. In this case, ten waves. Ten! And when there is very little differentiating one wave from the next, giving Enemy Mind a mobile game feel -- well more is not better. Even from a progression standpoint, level 1-2 doesnt feel much different from 1-8 in terms of intensity; you would think that the difficulty level would ramp up as you approach the bosses, who are, naturally, tucked away on the tenth wave of each stage.

Strangely enough though, bosses are pushovers. Because bosses are often collections of smaller enemies usually protecting some sort of central hub, all you need to do is fire at them madly on sight, and when enemy projectiles look to be coming your way, jump to a ship that isnt in the line of fire. Its hopscotch from sentry-to-sentry while pounding away at the core. Again, the novelty mechanic here is ingenious, but the implementation leaves much to be desired. 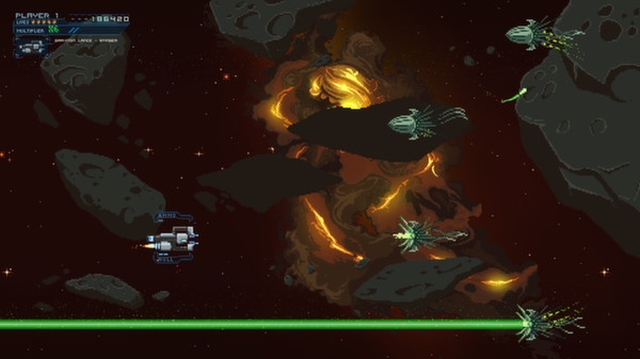 I wish I could say that the levels themselves fare better, but they don't. Stage one, wave one starts you off in a nondescript spaceship with only unimpressive peashooters at your disposal. Youll note early on that your ship has a vitality bar -- they all do. So it's not one hit, and you're dead: after taking a few shots an alarm will blare, your ship will flash red, and all of that will be your signal to make the leap to a healthier craft, probably, in many cases, the one who was just shooting at you. The fact that you can absorb multiple hits and can always bail yourself out by procuring a fresh ship makes Enemy Mind easy. The fact that the game forces you to jump ships every 10 or so seconds due to ammunition limitations, makes Enemy Mind annoying.

Yes, that's right. You don't just jump ship after taking damage or when you see a better craft available. The game insists that you constantly jump ship, because every ship has seriously limited ammo capacity. This leads to some comically quick jumping. Pew pew pew! Change ships! Pew pew pew! Change ships! And so on. I'm exaggerating, but only slightly. To make matters worse, the music is forgettable, there is nothing in the way of interactive foregrounds (one of the reasons we love horizontals!) and there are no distinctive or memorable backdrops to tell one area from the next. And most disappointingly, the ships that you commandeer arent particularly inspiring. You would think that in a game where you're constantly switching up ships, the game would entice you to capture cooler and more powerful spacecraft to keep things interesting. But that's just not the case. 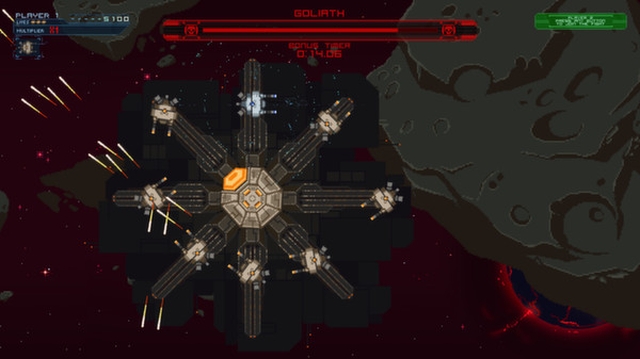 There were a couple of 'favorites' I had because their onboard weapons systems were preferable to whatever limp guns I was usually stuck employing, like the three-way spread ship, or the machine gun ship. But they don't look cool, or feel powerful or special, and as such, capturing them isnt satisfying. All of this wouldn't be so damning -- this substandard implementation of a great idea -- if Enemy Mind werent so long and drawn out on top of everything else. I'm sure you've done the math: eight stages, times ten waves... thats 80 waves that are barely indistinguishable from one another. After a while you think to yourself, what's the point? Halfway through and 40 waves in: do you want to do another 40?? Probably not.

Its too bad, because Enemy Mind showed great promise with a frankly remarkable gameplay mechanic, which, to my knowledge, had hitherto never been attempted. But the speed with which you run out of ammo and are forced to change ships, the lameness of the ships on offer, and the deluge of repetitive levels presented in relentlessly cardboard fashion, really sink this project. I would recommend it only as a curiosity to a hardcore shooter fan, so they might see the ship-snagging in action. Even then, a hardcore fan would likely dabble for a few worlds -- which insanely equates to a few dozen waves -- and then see themselves out. My suggestion to you is to not even bother going that far.
2.5/5

If you enjoyed this Enemy Mind review, you're encouraged to discuss it with the author and with other members of the site's community. If you don't already have an HonestGamers account, you can sign up for one in a snap. Thank you for reading!

© 1998-2020 HonestGamers
None of the material contained within this site may be reproduced in any conceivable fashion without permission from the author(s) of said material. This site is not sponsored or endorsed by Nintendo, Sega, Sony, Microsoft, or any other such party. Enemy Mind is a registered trademark of its copyright holder. This site makes no claim to Enemy Mind, its characters, screenshots, artwork, music, or any intellectual property contained within. Opinions expressed on this site do not necessarily represent the opinion of site staff or sponsors. Staff and freelance reviews are typically written based on time spent with a retail review copy or review key for the game that is provided by its publisher.