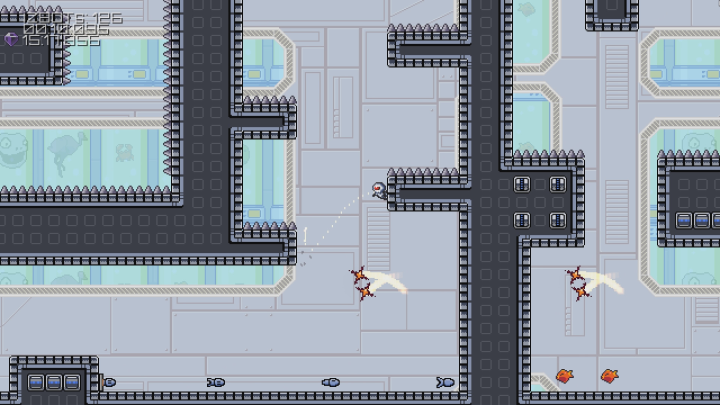 To say that iZBOT is a low rent Super Meat Boy rip off would be unfairly reductive, but it would also be fairly accurate. If you somehow managed to get this far in the world of gaming and do not know what Super Meat Boy is, it can be summarized as an almost comically difficult run and jump platformer, requiring from the player equal parts precision button presses and boatloads of perseverance to make it through its plethora of bite-sized levels with bite. That game seemed to be assuring us: Yes, each level seems impossibly hard, but the levels are so short! Your countless deaths will only set you back mere seconds. And so, suck it up, restart and have another go.

This is the subgenre were talking about, the one that, if SMB didnt start, it's surely carrying the flag. iZBOT for its part, does attempt to establish its own personality. SMB presents a literal chunk of bloody meat navigating a mostly hellish industrial aesthetic, where Izbot tries to give us what Im sure the developers thought was a cool robo-ninja somersaulting his way through a cold, uncaring future. The reality is not quite so cool: the future has never been so bland (the environs remind me of some of the worst levels from the League of Evil series of games). Again, I'm sure the main character was meant to be both irresistibly cute and badass, like Yoda in armour, and the little guy does boast some admittedly stylish acrobatic animations... but mostly he comes off like the environments he must speed through: as generic and... grey. The lack of personality here isn't the kiss of death, but it is unfortunate, because the lack of charm or panache makes the earlier clone talk really resonate.

iZBOT does manage to set itself apart in a real way by allowing us the ability to kill enemies  thats not an option in SMB and its ilk. Certainly avoidance is still the name of the game, but some foes can be dispatched by hopping on their heads, Super Mario Bros style. And if SMB (the meat, not the plumber) was about saws saws saws everywhere, then iZBOT is about spikes. It turns out, spikes are just as effective. That said, it's one hit and you're dead, whether from spikes or enemy contact -- only smooth walls, floors and the exit door to levels can be counted as safe. Suffice to say that staying alive across the games 63 levels it not easy. Each of the three worlds on offer furnishes 20 regular stages, and a 21st, where a boss resides. The boss battles require you to make use of those enemy head-bopping skills I mentioned -- so it's often on the backs of minions that you'll create separation from the main bad guys shots, and propel yourself onto him where the damage matters.

End-of-level bosses are definitely a nice addition, which helps iZBOT stand out, but they're also not the best part  or most challenging part  of the experience. Fans of the genre will probably have no difficulty flying through the first world, as well as most of the second, and they'll have a good time doing so. It's in the back half of the second world where things start to escalate, jarringly, arbitrarily, and overall not in a good way. Somewhat surprisingly, there are some stages in the third area which are more trying than perhaps anything else Ive played in this vein. In fact, I think I spent less time beating Super Meat Boy, The End is Nigh, and Celeste. And it's not because iZBOTs levels are more diabolically laid out, or demand more impressive feats to finish. It's because the troublesome levels are longer to their detriment, and trend away from the tasty, bite-sized death we've come to enjoy.

And the dullness of the presentation aside, herein lies iZBOTs true weakness: Its unevenness in difficulty makes it feel as if it wasn't properly played tested. There are random levels you'll be stuck on that don't make sense within the progression of the adventure. Youll get past a sticking point, only for the next half dozen levels to fall in rapid succession with no trouble at all. And those sticking points mainly test your patience because those levels simply feel too long for this type of game. That being said, as a budget member in an exclusive club, as a distraction or something to fill the void between this and the next super hardcore platformer, iZBOT is a worthy, if small and unbalanced entry.
3.5/5

If you enjoyed this iZBOT review, you're encouraged to discuss it with the author and with other members of the site's community. If you don't already have an HonestGamers account, you can sign up for one in a snap. Thank you for reading!

© 1998-2020 HonestGamers
None of the material contained within this site may be reproduced in any conceivable fashion without permission from the author(s) of said material. This site is not sponsored or endorsed by Nintendo, Sega, Sony, Microsoft, or any other such party. iZBOT is a registered trademark of its copyright holder. This site makes no claim to iZBOT, its characters, screenshots, artwork, music, or any intellectual property contained within. Opinions expressed on this site do not necessarily represent the opinion of site staff or sponsors. Staff and freelance reviews are typically written based on time spent with a retail review copy or review key for the game that is provided by its publisher.