Armortale is one of those retro homages whose screenshots, to the retro-sensitive, are positively eye-catching. If you grew up with, and enjoyed games like Wonder Boy III: The Dragon's Trap for the Sega Master System and Wonder Boy in Monster World for the Sega Genesis as I did, all it will take are those screenshots and a kind word and you won't stand a chance.

Armortale occupies, as many modern retro takes do, that middle ground between the 8 and 16-bit aesthetic. It is bright and colorful and the storytelling is cheeky, if littered with little errors, which, in some ways, add to the charm. As the name of the game implies, the motif here is the protagonist's armour. You start off, as Tom Tom did in the original Wonder Boy, wearing nothing but a scrap of cloth to cover your privates. (In fact, what you're wearing initially could be accurately described as a diaper.) With your first major mission under your non-existent belt though, you will earn that first set of all-important armour, and you never look back. But never forget! Your character literally starts off half-naked chucking rocks. It's funny, it never seemed so preposterous when Tom Tom and Master Higgins of Adventure Island fame rocked this look so many years ago.

Anyway, there are four sets of armour in all, each with their advantages and disadvantages which lend them to a variety of challenging situations as they arise. Heavy armour equips you with a powerful lance melee attack and allows you to not only walk on spikes, but to survive spikes overhead. The drawback here is obvious: heavy armor, limited speed and agility. This is not what you want to be wearing when you're attempting some of the precise platforming that the game expects of you. 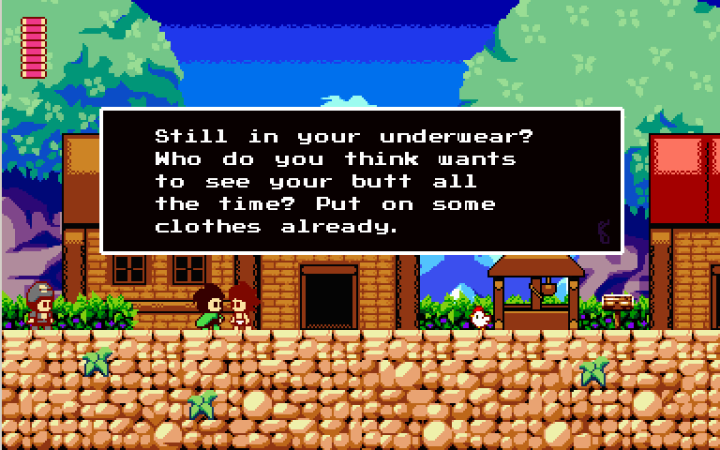 Then there is a bright crimson warrior armor set, which allows you to be much fleeter of foot and permits far greater jumping abilities. You can cling to the ceiling in this get-up (very useful!) and you'll also be gifted a spin attack, which is nearly invulnerable; performing it will allow you to rend out enemies, their projectiles, and even toxic waterfalls like curtains, should the need arise, and it will.

The bomb armour, is far less versatile. Of the sets, it's definitely 'the specialist.' The bomb armour predictably equips you with very powerful (wait for it) bombs. These are good for taking out specific enemies resistant to the other weapons, as well as certain walls, which might otherwise bar your progress.

And finally, we arrive at possibly the most useful of the armour sets: THE BLUE ONE. It allows you to jump much higher than normal, and to float momentarily, permitting you to reach higher heights and greater distances when leaping. It's like channeling Luigi AND Princess from Super Mario Bros 2! Unlike the other three armour types, blue also permits you to unleash a range attack. You'll be able to fire what look like little arrows, two at a time halfway across the screen.

Armortale does an admirable job at easing you into each armour set, and then in the later going, making you put it all together. Most often, you will find that a combination of blue and heavy will serve you best as you will alternate between covering large gaps and nimble platforming gymnastics in general, and protecting your behind from the one-hit-and-you're-dead spectre of ubiquitous spikes. 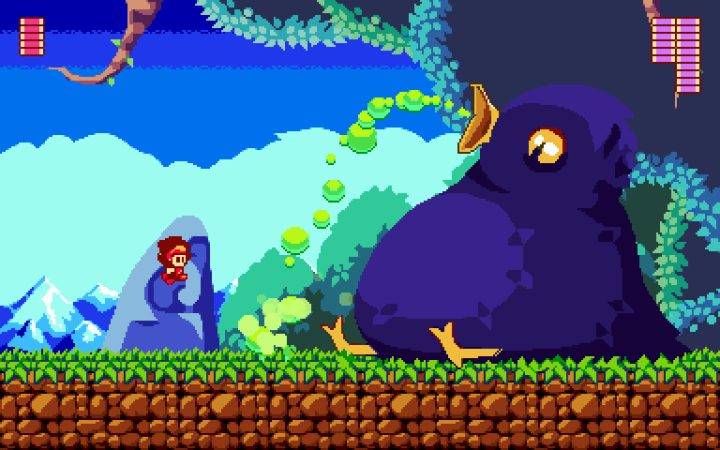 In spite of all of the retro goodness here, you knew there had to be a problem. You looked ahead at my score, after all. And Armortale's major weakness raises its head early on in the proceedings: there are far too few checkpoints. Some levels only have one. One! This requires from you cautious, deliberate platforming play. Even in the early going when the game seems almost too easy, you can find yourself frustrated when you fall on spikes and die instantaneously, and realize that you haven't yet reached a checkpoint, and it's back several minutes you go.

Of course, because the early levels are so easy, this won't bother you much. You'll just have to really pay attention, bear down and perform perfect runs. And that's more than reasonable, given the level of challenge.

But get deep enough, and you'll come across a windy stage, which is perhaps the third level from the end, where the difficulty spikes violently. You will likely die here early and often. And you'll wonder where in the hell the obnoxious challenge came from. Worse yet, is the final level, which we would expect to be a stiff challenge. But it's more than that: it's fairly long, made up of several trying sequences, with just the one checkpoint in the middle of it.

Both the windy stage and the final stage give us extra lives almost by way of apology, essentially allowing us unlimited attempts at getting it right. The extra lives are situated near the beginning of the levels, and in the case of the last stage, also immediately after the only checkpoint. This allows you to grab the extra life, under-perform horribly, die and give it another go without any effect on your life count. Only on your sanity then. 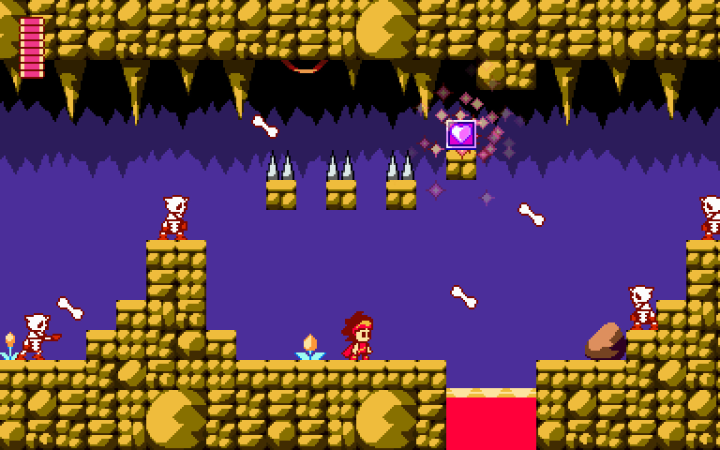 Were Armortale to provide even one more checkpoint in these later levels, much hair pulling and cursing would be avoided. Unfortunately, given the high degree of quick-changing required in that final stage, the game itself fails to do its part, as it is here we notice that the controls are not exactly up to the task. This was a missed opportunity: each of the four armor types could have been assigned a face button for quick and seamless transformations. Instead, we press the shoulder button and up comes a quick-change screen, which isn't so quick and is certainly clunky. Once here, we must choose an armour set by tapping a direction on the D-pad before immediately returning to the action.

You can see where this is going, can't you? Countless times I have transformed by tapping down on the change screen, and then immediately held right to finish a jump (you often need to change suits in midair), only for the game to switch to the armour selection on the right. Countless times this has led to my underwear clad friend dying instantly on spikes, because I thought I was all set in my heavy armour. Again, not a big deal in the early going. But when called upon in the thick of things? Utterly disappointing, and practically devastating.

If it sounds as if I'm mad at Armortale, I am a little bit. It started off as a quaint, cute, wonderfully valued homage to the Wonder Boy canon and games of its ilk and vintage. And it still is all of those things. But it's also a flawed little game with a very uneven difficulty curve and some poorly implemented controls which contribute to the pain of that curve. And I rather like hard games: from Celeste to The End is Nigh, they account for many of my recent favourites. But rockhard sequences are the way to go -- not somewhat hard sequences complicated by dodgy controls and long stretches where no progress is saved. The closer I got to the end, the less I enjoyed myself, and that's usually not the way it works with good games. All that being said, sourness aside, Armortale is still worth your time, especially at the price it's going for. It's hard to beat this much retro goodness for the price of a coffee. By all means: do check it out, but be prepared for some frustration with your fun.
3/5

If you enjoyed this Armortale review, you're encouraged to discuss it with the author and with other members of the site's community. If you don't already have an HonestGamers account, you can sign up for one in a snap. Thank you for reading!

© 1998-2020 HonestGamers
None of the material contained within this site may be reproduced in any conceivable fashion without permission from the author(s) of said material. This site is not sponsored or endorsed by Nintendo, Sega, Sony, Microsoft, or any other such party. Armortale is a registered trademark of its copyright holder. This site makes no claim to Armortale, its characters, screenshots, artwork, music, or any intellectual property contained within. Opinions expressed on this site do not necessarily represent the opinion of site staff or sponsors. Staff and freelance reviews are typically written based on time spent with a retail review copy or review key for the game that is provided by its publisher.