Toiled though it has in a state of semi-obscurity, Overdriven has been around the block. Released initially on the now defunct XBox Live Indie service, its seen a small flurry of updates thats thrust it onto a number of platforms since. Still, Overdriven shows its age; its chunky and creaky and time has certainly taken its toll.

I think its biggest problem is that it outstays its welcome. Overdriven just doesnt know when to call it quits. The levels all feel like they should be shorter and snappier; the boss fights that bookend each stage never really present anything interesting; they just present something big with a predictable attack pattern and then slap on a massive health bar for you to slowly chip away at. Overdriven rambles when it should be concise. For example, some levels you cant just progress to by beating the levels previous, but you have to unlock by discovering hidden alien artifacts scattered around the stages in inconvenient corners. It means that if youve not stumbled across enough of these pointless McGuffins by the time youve beaten the first handful of levels, then back you go to play through them again and again until you find them. This is a bad idea. You there, reading this: should you even decide to make a scrolling shooter game, dont do this.

You can also find a space cow hidden in each stage, but none of that makes any sense, so Ive chosen to ignore it Thats not to say that Overdriven has nothing going for it. It is, if nothing else, a social creature, allowing up to four people to couch co-op, meaning that up to three other people can be sloshing around the screen, stealing all your power ups. Not that theres a lot to steal; you can collect stars for delicious bonus points, but also to earn obligatory side satellite helpers, as well as limited power surges, screen-clearing bombs and shields. Shields play a big part of the game design because, underneath it all, Overdriven is soft and vulnerable without them. Rather than subscribe to the eat one bullet and die routine, you can soak up a little bit of punishment. So long as you catch bullets in your normal state, anyway; the games title derives from the ability to overdrive your ships functions, doing away with your conventional assaults and spewing a massive, thick stream of plasma instead. Its considerably more powerful than your standard means of attack, but cripples your other functions, halving your ships speed and devouring 80% of your health, meaning that a single bullet will probably be the end of you. 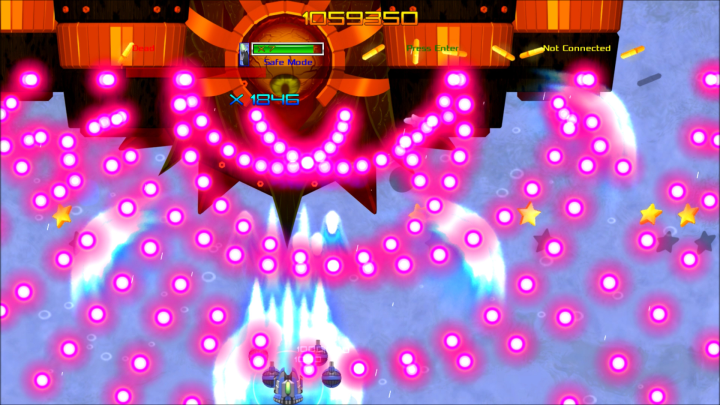 Its a fun system to experiment with, but mainly makes the laborious boss battles more manageable. For the most part, half speed is all you need to slip past their rudimentary attacks, and you always have the option to switch back to your standard attack, wherein all your usual benefits instantly return. You can also switch up your ships colour scheme where your shield and bullets can take on one of four different hues of your choices (assuming you're friendless; co-oping gives you less of an open choice.) This is, of course, to allow you to take part in the games match-3 sub element where you can shoot massive gems and turn them into the same colour as you ship and, if you get three the same colour, they explode.

In the actual game itself, this is barely explored. Sometimes youll need to clear some gems to get into a side corridor to pick up one of those bloody alien artifacts and, sometimes, youll have the option to blow up some gems just because theyre in your way. This mainly relates to one of the games many, many side modes. As well as playing out the ten stages (an extra three since slapped on since the original XBLI release) in either story mode or arcade, you can also play Maniac mode, which employs more punishing hit dynamics. You can also play a Boss Rush, numerous match-3 puzzles, a defend the line endless horde mode where you lose should an enemy make it to the bottom of your screen, and a plethora of additional missions, such as beating a stage without dying, or destroying a boss in under a minute. Its almost like Overdriven is trying to compensate for something. 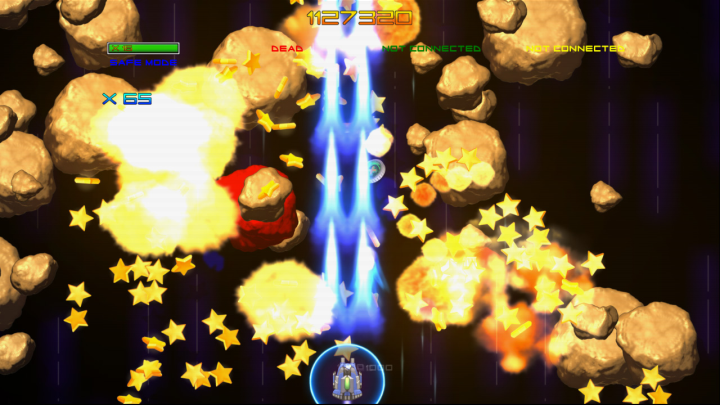 Thats what makes it so hard to be almost lukewarm on the experience, because Overdriven is nothing if not a relentless trier. Theres little moments that are genuinely cool, like darting through a minefield and finding that if you take the risks, blowing up mines leads to ridiculous bounties. Or moments where the enemy onslaught pauses and you instead have to slip your way through glowing corridors that rhythmically open and close, making you dash into little pockets of safety while you wait for your path to reopen. Or how, while painting the screen with laser, you can accidentally slaughter a brood of baby space octopus, and enrage the end-of-stage boss.

It makes it hard to dislike Overdriven. Its a little simplistic and wouldnt understand brevity if you taped it to a half brick and lobbed it in its face, but theres no denying how hard it works to keep your attention. Theres good ideas in there, and it manages to still eke out highlights among the grind. Theres also space cows. Why are there space cows?
3/5

If you enjoyed this Overdriven Reloaded: Special Edition review, you're encouraged to discuss it with the author and with other members of the site's community. If you don't already have an HonestGamers account, you can sign up for one in a snap. Thank you for reading!

© 1998-2020 HonestGamers
None of the material contained within this site may be reproduced in any conceivable fashion without permission from the author(s) of said material. This site is not sponsored or endorsed by Nintendo, Sega, Sony, Microsoft, or any other such party. Overdriven Reloaded: Special Edition is a registered trademark of its copyright holder. This site makes no claim to Overdriven Reloaded: Special Edition, its characters, screenshots, artwork, music, or any intellectual property contained within. Opinions expressed on this site do not necessarily represent the opinion of site staff or sponsors. Staff and freelance reviews are typically written based on time spent with a retail review copy or review key for the game that is provided by its publisher.