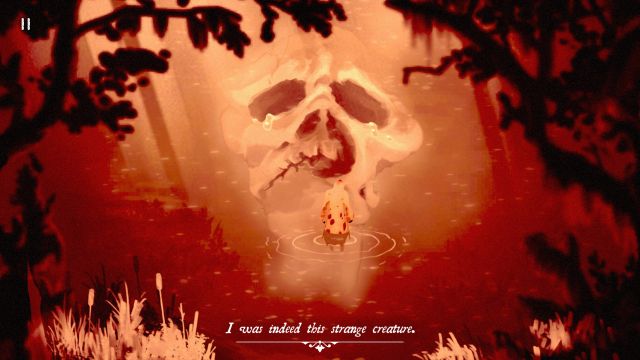 There are dozens of iterations of Mary Shelley's novel "Frankenstein," and it's always nice to see a rendition that's not just a watered down remake of James Whale's film. The Wanderer: Frankenstein's Creature retells the tale as a soulful adventure, where you guide Victor Frankenstein's iconic monster from the moment he awakens until you reach one of the multiple endings. Unlike other versions of the story, this one offers a handful of moral choices or actions you can take that influence the ending.

As you can imagine, this title emphasizes plot over action. You don't engage in any challenging segments or run afoul of frightening moments, but guide the monster via point-and-click mechanics from one set piece to the next and solve simple puzzles. Each chapter you enter features its own themes, lessons, functions, scenery and tone. Through this campaign, the protagonist discovers nature, humanity, hope, love, religion and various other facets of life and society. However, if you know even a little about the novel, then you know that these discoveries seldom end well for the being. Though he might mean well and desire companionship, others can't see past his horrifying face, and thus reject him.

Each scene first hits you with overwhelming beauty, coupled with the protagonist encountering something for the first time. After all, if this game is going to set the monster up for disappointment, it first has to establish a wonderful high point. When he leaves his creator's abode, his eyes struggle to adjust to the bursts of color that make up the forest. As you push through these segments nearly blind, you begin to see splotches of green grass and bright flowers. Before long, the whole forest comes into view, and visuals reminiscent of water color paintings cover the whole screen, complete with a lush environment, laughing spring and gorgeous rays of sun beaming through the canopy. 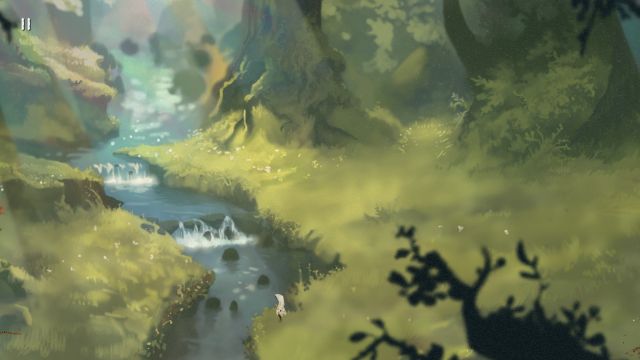 However, it's not the presentation alone that fulfills these moments, but the creature's reaction to them. He responds to each new discovery with child-like wonder and awe, finding brilliance in nearly everything he encounters. He drinks from a stream and you see colors radiate from him, and you wish you could view the simplicity of life and nature with that kind of passion.

Sadly, the creature's happiness doesn't last. After eating some berries and falling in love with the flavor, he tries a bit of carrion and experiences his first brush with disappointment. Not long after that, you bump into your first moral decision when a snake meets a fawn. If you do nothing, the result leaves the monster horribly distraught and racked with guilt. Get used to this, because he encounters increasingly worse hardships as his adventure progresses.

For instance, when the protagonist meets humans for the first time, only the children respond to him positively. The rest of the villagers see him as a monster, a demon or even Satan incarnate, out to deceive and destroy them. This initial encounter doesn't end well, and eventually offers you a chance to either roar or retaliate against your attackers. Neither selection ends well, but one of them pretty well shreds the monster's own self-regard. 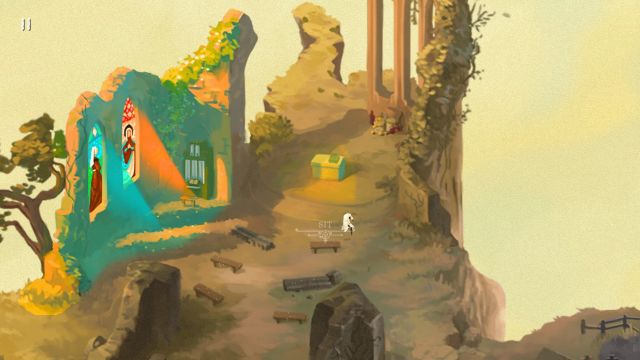 That pretty well sums up the entire campaign: you constantly take part in dazzling experiences, unfortunately punctuated by melancholy outcomes. All the while, the music of Alex Burnett perfectly captures the vibe of each scene. Wonderful points soar with heart-felt themes and beautiful vocal work, while the more depressing moments offer fairly downbeat tunes. In the case of the latter, you aren't greeted by on-the-nose somber notes, either. Though they carry a gloomy tone to them, they still resonate beautifully. They aren't your average "sad tracks," but ones that evoke a whole host of other emotions.

But The Wanderer isn't just a spree of striking visuals set to an awesome score. Although it sounds like a walking simulator, you still need to interact with it significantly. The interactive sections may lack difficulty of any kind, but they're more at home with the experience than your standard jaw-jacking trials. Your tasks differ from scene to scene, all depending on the monster's motives at the time. For instance, you play ball with some children when you first discover humans, or restore a place of worship once you've learned a bit about religion. The former of these requires you to run into a ball, passing it back and forth between some kids for a short time. The latter allows you to explore a ruined church and nearby graveyard, interacting with various points on the map. As before, how you restore the grounds affects the outcome. 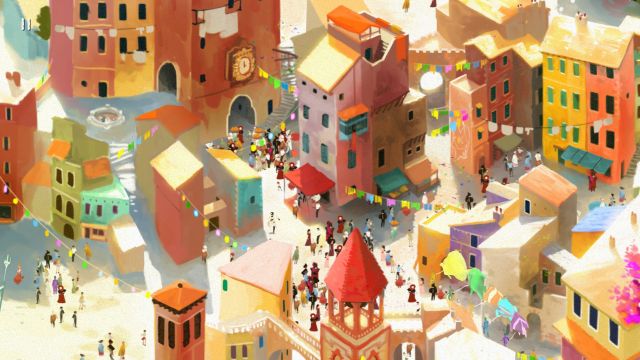 Unfortunately, you do hit a variety of weak points during these interactive bits. One event involves catching a rabbit in a trap, but the game doesn't explain how to do this very well. It seems to imply that you have to chase the bunny into a box, and doesn't tell you that you need to pick the box up and place it over one of the rabbit's burrows. Another segment requires you to chop wood, but suffers from an unresponsive interface. In order to cut a log, you need to click a prompt to lift your ax, and another that appears later on to drop it. Frustratingly, the second prompt doesn't like to respond too well, so you need to spam-click the area where it appears in order to get it to work. I failed in my first attempt, and the game doesn't allow you to retry. You either need to completely reload your save file, and thus take the whole segment from the top, or restart the campaign.

To an extent, these portions felt like busywork, but not necessarily in a bad way. Without them, you'd basically have an interactive movie. Their inclusion thus keeps the experience fresh without placing ridiculous demands upon you, and still makes use of the medium's defining trait. Obviously, if you aren't interested in interactive fiction, especially one that isn't intended to test you skills, then you're better off sitting this one out. However, if you wouldn't mind a breezy, artful point-and-click, then this title could be right up your alley. Just be prepared to emotionally torture yourself a bit...
4/5

If you enjoyed this The Wanderer: Frankenstein's Creature review, you're encouraged to discuss it with the author and with other members of the site's community. If you don't already have an HonestGamers account, you can sign up for one in a snap. Thank you for reading!

© 1998-2020 HonestGamers
None of the material contained within this site may be reproduced in any conceivable fashion without permission from the author(s) of said material. This site is not sponsored or endorsed by Nintendo, Sega, Sony, Microsoft, or any other such party. The Wanderer: Frankenstein's Creature is a registered trademark of its copyright holder. This site makes no claim to The Wanderer: Frankenstein's Creature, its characters, screenshots, artwork, music, or any intellectual property contained within. Opinions expressed on this site do not necessarily represent the opinion of site staff or sponsors. Staff and freelance reviews are typically written based on time spent with a retail review copy or review key for the game that is provided by its publisher.