Ever since Tetris proved stacking blocks and making them disappear can be a thrilling activity to engage the masses, developers have attempted to make the concept their own. They've met with varying degrees of success along the way and have conjured up all sorts of creative ventures that branched out from a similar starting point. Sometimes, though, it feels like no one will ever quite top the original Russian masterpiece.

Raining Blobs, from Black Shell Media, makes an attempt just the same. It presents the usual vertical space, then starts dropping blobs from above in pairs of two, like in Puyo Puyo or Lumines or countless others. By default, the goal is to place pieces so that those of a matching hue form a connected mass. Some of the pieces have stars stamped on them, and whenever a couple of them connect--either directly, or with a number of other pieces of the same color serving as a conduit--there is a flash and a shake of the screen as the adjoining pieces vanish like dessert at a potluck. Then everything shifts to fill the empty space you created, which may produce a combo if the movement leaves more stars aligned. Or you may just wind up with more space, which isn't usually an unwelcome outcome. If you are battling any opponents, you may also send some junk their way. 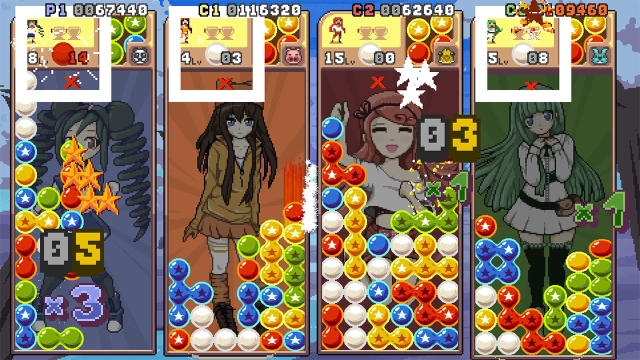 Does any of this sound super exciting? I assume it doesn't, since a fundamental truth about puzzle games is that they almost always play better than they sound on paper. The best examples of the genre in action let you enter a zone where you're moving pieces almost like a machine, lining up combos and barely registering each micro-triumph because already your mind is several moves ahead of the chaos. Such moments are truly exhilarating... though they mostly didn't occur during my own time with Raining Blobs because apparently I suck.

I was also disappointed to find that although the game's title implies sass, the proceedings feel more like something you'd encounter in a board room presentation. I figured the developers would inject a little more personality in the proceedings, like a music video from The Weather Girls. Can't you just picture some guy in a trench coat and a derby and spandex underwear, dropping slowly past a window and holding an ugly green umbrella? Instead of that sort of fare, players are offered a few character portraits of generic anime girls who make inane comments that are no doubt supposed to serve as their quirks, then compete to line up the most blobs. At least men in trench coats make me grimace. This particular batch of girls doesn't inspire more than a yawn. 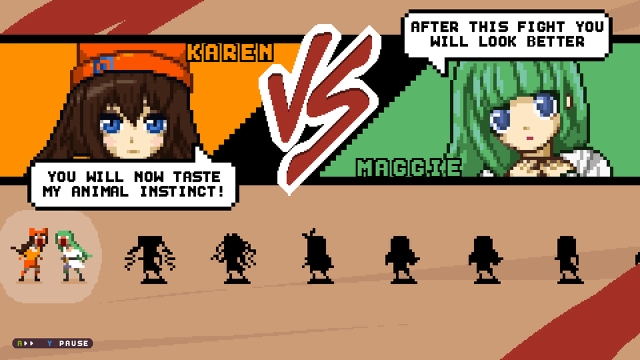 The four gameplay modes try to make up for some of the missing pizzazz. You can go for Arcade, where the goal is to reach level 100, or Endless, where you play for as long as your skills keep you in the mix. If you prefer, you might try Puzzle mode, where you are presented with 100 successive screens populated with an assortment of blobs and must quickly line up another falling glob to clear the entire space by making a single match (which feels more like combo training than it does a worthwhile diversion). Finally, there is Tournament, where you are pitted against a series of increasingly difficult AI opponents, one at a time.

For me, the modes felt too similar to inspire real enthusiasm for the promised variety. Arcade is interesting at first and a great way to jump right in, but it moves slowly and ratchets up the difficulty unevenly, so that on my first run I only got about halfway to the stated goal of level 100. Everything went well until it suddenly didn't. I performed better on subsequent runs, but not by much. No single run ever inspired me to grip my controller more tightly and assure myself I would do better the next time around, the way more absorbing and addictive puzzlers might. The introduction of new varieties of piece starting around 40 levels in does make things more exciting, but that complication is joined by periods where blocks suddenly start falling at an alarming rate for increasingly lengthy periods of time. Such barrages feel cheap rather than thrilling. 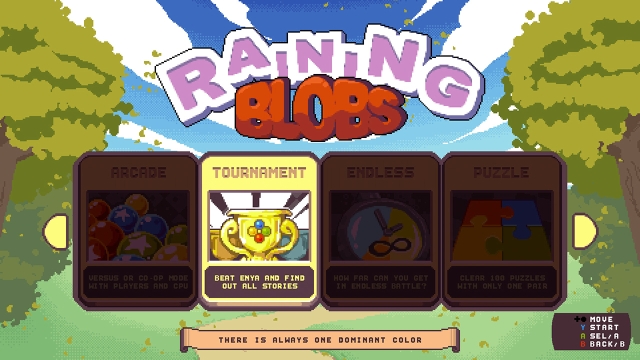 In Tournament mode, the first few opponents are a piece of cake but later ones drop pieces more quickly than I can move and their ambitious behavior threatens to fill my screen with junk if I don't counter quickly. Even when I send a pile of rubble their way, they just shrug it off and heap twice as much on me in return. I can't say I particularly enjoy that dynamic, because it tends to punish the careful construction of combos. Pressing 'Up' on the d-pad will prompt pieces to instantly drop, but only if you activate the right "variants" ahead of a match. Should you decide to take your time with placement instead, there's a surprisingly generous window wherein you can manipulate orientation after a piece actually lands. Still, I'm not in love with the sped up stretches where it feels like pieces are halfway to their final resting place before you even have time to register their arrival. Your choices for placement in such cases are: a bad spot or a worse one. Even then, you have to be quick like a fox or the decision is made for you.

If you decide to play the game and you run into some of the same trouble I did, know that you at least can make adjustments. You can make a lot of them, even. In addition to the major tweaks you might make on the "variants" menu (including one that causes pieces to vanish any time more than four of them are touching, which is a fairly significant modification), there are quality-of-life considerations such as an optional color blind mode. You can also disable screen shaking and change which of the two falling pieces serves as the anchor for the other when making rotations. Elsewhere, you can lower the difficulty but then you won't be able to obtain those sweet, sweet in-game achievements. And of course, you'll know even when you eke out a victory that you weren't playing the game "the way it's meant to be played." 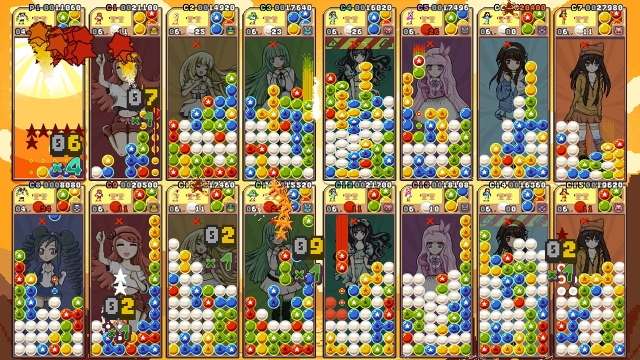 Despite my complaints above, I do think Raining Blobs will appeal to a real audience because it so aggressively supports multiplayer matches. You can play with as many as three friends if you like. No, scratch that. You can play with as many as seven friends. How many other puzzle games do you know of that let you and your best seven buds gather around the television and drop blobs and trash talk? Not only that, but you can add another eight computer opponents to the mix on top of that, if it suits you. I had to settle for a few rounds with a single local acquaintance, who kicked my butt in a best-out-of-three environment while I was busy explaining the rules. It turns out rubbish flying back and forth between competitors really messes with the risk-versus-reward balance and forces savvy players to adopt new strategies. I can only dream of the frantic matches that will surely ensue when the number of participants enters the double digits.

Raining Blobs is a fairly standard puzzle game without a lot of personality, but it gets the job done despite its apparent simplicity. The music is serviceable and suitably upbeat, and the visuals are appropriately cheery with a pleasing retro design. There's just enough charm throughout to keep a single player entertained for a bit, particularly once you go into various menus and make whatever tweaks please you, but there's probably not enough reason for the solitary player to keep the plummeting gelatin in rotation for the long haul. If you have a slew of friends you can bring together for some puzzle mayhem, that's when you'll get real value from the package. Otherwise, you're probably better off playing an old standard like Super Puzzle Fighter 2 Turbo or Puyo Puyo or even Tetris. There's no shame in taking another stab at the classics!
3.5/5

If you enjoyed this Raining Blobs review, you're encouraged to discuss it with the author and with other members of the site's community. If you don't already have an HonestGamers account, you can sign up for one in a snap. Thank you for reading!

© 1998-2020 HonestGamers
None of the material contained within this site may be reproduced in any conceivable fashion without permission from the author(s) of said material. This site is not sponsored or endorsed by Nintendo, Sega, Sony, Microsoft, or any other such party. Raining Blobs is a registered trademark of its copyright holder. This site makes no claim to Raining Blobs, its characters, screenshots, artwork, music, or any intellectual property contained within. Opinions expressed on this site do not necessarily represent the opinion of site staff or sponsors. Staff and freelance reviews are typically written based on time spent with a retail review copy or review key for the game that is provided by its publisher.