Before I played Mario & Sonic at the Olympic Games: Tokyo 2020, I had no idea that when Japan previously hosted the Olympics, the year was 1964. That's kind of cool, I think, and for me it brings to mind the 64-bit generation of video games. Apparently, someone on the game's development team made the same mental leap, as suggested by a new scenario that lets players travel back to that glorious year and view everything through a retro lens.

To be sure, the trip through the decades isn't all smiles and rainbows. It only happens in the first place when Eggman and Bowser scheme to finally rid their lives of that pesky heroic duo, Mario the plumber and Sonic the Hedgehog. The demented scientist and the giant turtle use their brains and their Koopa magic, respectively, to construct a laptop arcade machine that they send as an anonymous "gift" to their adversaries. Unexpected developments occur, as they often do in such circumstances. Before you know it, all four characters are deposited in the world within the machine. The only way to escape is to gather gold medals by competing in local athletic events, but old rivalries die hard and you can expect competition rather than collaboration. Meanwhile, in 2020, Luigi seeks help from his friends to hasten the return of those unfortunate souls trapped in a retro wonderland. 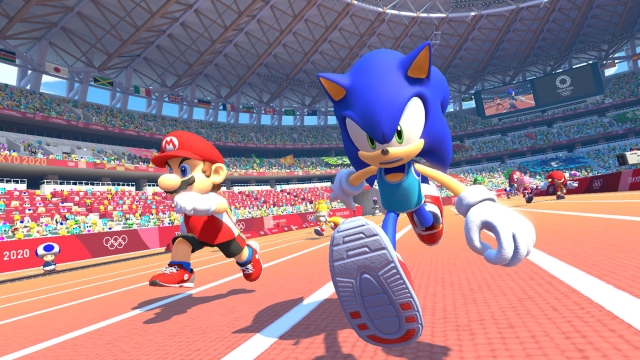 This is a multiplayer game at heart. From the main menu, you can choose to play locally with other players utilizing the same television screen, or everyone can play locally on their own Switch hardware. If that's not ideal, you can even head online and seek opponents on the worldwide web. "Don't play this alone," the developers seem to be saying, "but if you absolutely must, we've put together a story that will take you through all of the events on hand--with a few surprises along the way--to make it all worth your while." So, did they succeed? Not entirely, in my estimation. The results are too inconsistent.

First, there is the narrative to consider. I feel a bit silly critiquing dialogue in a game about plumbers and hedgehogs competing for Olympic gold, but these are characters with rich history and a legion of fans (including me). I like Mario to act like Mario, Bowser to act like Bowser, and the various Sonic characters to come across as distinct and interesting. The writing doesn't seem to be quite up to the task, unfortunately. Probably the most dynamic personality is Bowser Jr., who behaves in a predictable manner that at least is consistent with his performance in other games. His father too often comes across as a generic lackey, and the majority of the remaining cast has no purpose other than to say--with only minimal variation--something along the lines of "Oh, there's a huge catastrophe unfolding and you need my help, but I'm not going to give it to you unless you defeat me at this particular Olympic event." There are occasional lines of dialogue where the familiar spark is visible, but only briefly. 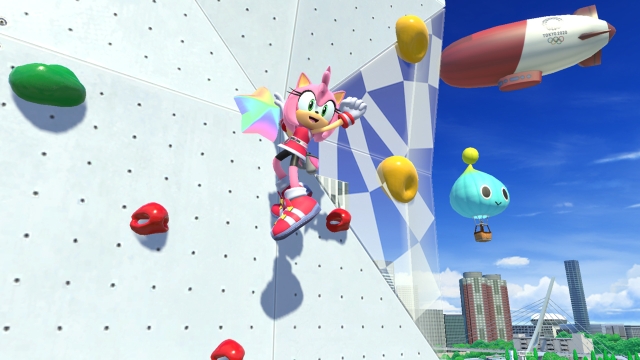 The campaign's general interface is presented as a map of the region. It's surprisingly lively, with nodes representing various points of interest throughout Japan. Visit those destinations and you'll find they are beautifully rendered and full of activity. Just wandering around some of the livelier locations was one of my favorite activities, and such curiosity is rewarded. Flags positioned about each area offer bits of trivia. Generally, those tidbits relate to the Olympics, and provide historical perspective or just information about specific event rules. I found that stuff surprisingly compelling. It gives a person the sense the developers really do love the Olympics and their history (especially as they relate to Japan). The game's closing credits acknowledge assistance from various venues, so I imagine a lot of the areas I enjoyed wandering through are modeled closely on reality... though probably if I were to visit Japan today, I would see fewer Toads and Shyguys in person.

The events are all over the place in terms of quality, which has nothing to do with the fact they have been divided among eras. Vintage events feature retro visuals that would have fit in nicely with the NES library and an announcer who sounds like he just got back from voicing Smash TV. Between his quick, muffled quips and the repetitive but catchy music, the desired effect is definitely achieved; I felt like I was playing a game from 1985. In the majority of events, which take place in 2020, the tunes come through clearly and the visuals feel more like something you might expect to play on the Wii U or PS3. The character models are starting to look a bit outdated and plain by today's standards, but they do get the job done. 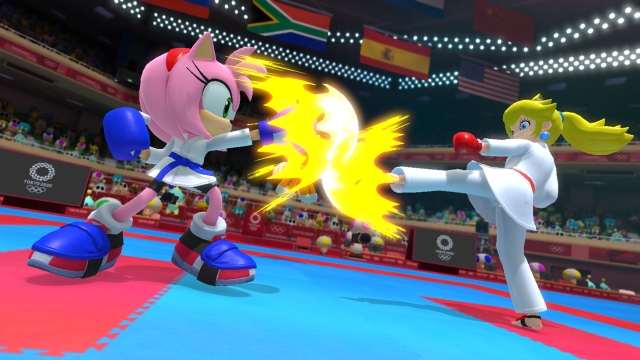 Some of the events are new to this game. They include Skateboarding, which plops you in a skate park not terribly unlike the first stage of Tony Hawk's Pro Skater. You launch from ramps to perform tricks in the air, or you grind along the lips of ramps. Karate plays about like you might expect, with the participants trying to smack the heck out of each other, but Street Fighter II it is not. Surfing is a more compelling event. You begin out on the ocean, paddling gently as a wave approaches the shore. You ride it and either keep to the crest while performing high-scoring flips and the like, or let it wrap overhead while you try to maintain your balance. The presentation is very effective, and I had a lot of fun with it. There also is a Sport Climbing event, where you try to scale a high wall and leap from one handhold to another, hopefully with more speed and grace than any opponents. Numerous other events are also on hand, bringing the total to just over 30.

There's not room here to describe every event, but a lot of them are quite fun once you get the hang out of them. My biggest single gripe with the game was the difficulty I encountered while trying to figure out the new quirks of each attraction. Control schemes swapped around from one venue to the next. Sometimes, I had to hold one button until the word "Go!" appeared, then release it to get a running start. Other times, the principle was the same but it was a different button for no reason I could see. This meant I had to pay close attention to instructions ahead of each event, and sometimes the advice the game offered was too vague. In one case, I had to play a football shootout event to progress the story, but the prompts provided pertained to a more standard match. 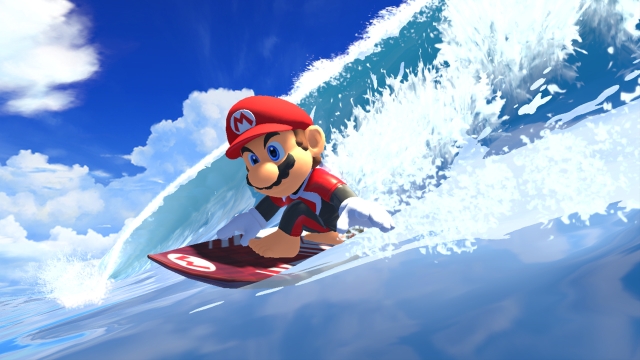 If you have trouble conquering your opponents while working through the campaign, that can be very frustrating. I might have sworn a bit, now and then. In any event built around a net (and there are several of those), the AI seems like some sort of athletic prodigy, while in many other events it manages such a strong performance that it's difficult to even come close to winning without a lot of practice. Then, there are times when your victory is all but assured unless you completely botch things. It's hard to know what to expect. In the vault event, I played on the easiest difficulty setting--the default--and couldn't ever get a score high enough to place, even though it seemed like I was doing everything perfectly. Then I bumped up the difficulty setting and easily won with a lesser performance. Such quirks muddy the overall experience, and the solution the developers seem to have settled on is to let you skip an event after three consecutive failures. I would have preferred that they work on balance a bit more. I also would have liked it if, after failing to place a few times, I could consult the instructions again without having to first back out to the event and re-enter it.

Besides the expected activities, the campaign offers bonus events you must clear along the way. A lot of them are pretty good, too. One of my favorite mini-games is a horizontal shooting segment that finds you taking to the skies to blast swarms of enemies out of the air before finally dealing with a boss at the end. In another, you sort through a square crowded with tourists and try to find specific individuals before your time expires, sort of like a game of Where's Waldo. These stages are pretty creative in general and definitely add value to the overall package, but they're not all winners. There is a stealth event that requires a lot of trial and error as you attempt to sneak past Bowser's patrolling minions. I could have done without that one. 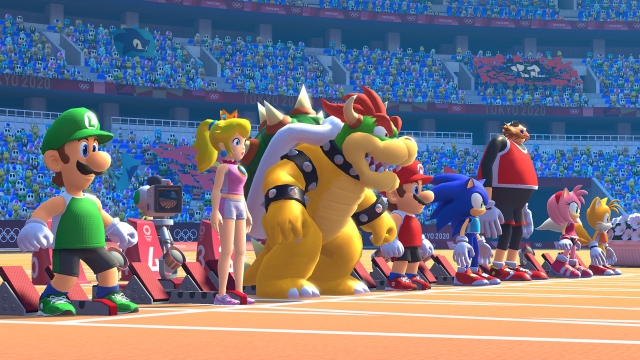 Finally, there are a few more ambitious "Dream" events on offer. One consists of a race along a dangerous course that reminds me of a similar diversion in some of the Super Monkey Ball games. Another mode lets players run around on a board of sorts, knocking each other about and throwing them to the ground to claim the most territory before the timer concludes. My favorite is Dream Shooter, which feels a lot like Splatoon 2 without the paint or squids. You pick a character and run through an arena, blasting targets or possibly your rivals as you grab power-ups and try to secure a high score. I play with the Pro Controller and usually do well for myself, relying on motion controls and the analog sticks to easily build up high scores. If Sega wanted to expand on this mode and make a proper game of it, I would probably be on board.

In the end, Mario & Sonic at the Olympic Games: Tokyo 2020 is difficult to rate. It features satisfying high points, including enjoyable events and mini-games and some nicely detailed locations that are a joy to visit along the way. But then there are the unnecessarily convoluted and inconsistent controls, dated character models and often bland dialogue that rarely captures the personality of the memorable mascots Sega has assembled. Younger gamers will be best served by the resulting mix, and I can imagine families gathering around the television to act out their very own Olympic competitions, but anyone else is probably better off looking elsewhere for the next great party game fix.
3.5/5

If you enjoyed this Mario & Sonic at the Olympic Games: Tokyo 2020 review, you're encouraged to discuss it with the author and with other members of the site's community. If you don't already have an HonestGamers account, you can sign up for one in a snap. Thank you for reading!

© 1998-2020 HonestGamers
None of the material contained within this site may be reproduced in any conceivable fashion without permission from the author(s) of said material. This site is not sponsored or endorsed by Nintendo, Sega, Sony, Microsoft, or any other such party. Mario & Sonic at the Olympic Games: Tokyo 2020 is a registered trademark of its copyright holder. This site makes no claim to Mario & Sonic at the Olympic Games: Tokyo 2020, its characters, screenshots, artwork, music, or any intellectual property contained within. Opinions expressed on this site do not necessarily represent the opinion of site staff or sponsors. Staff and freelance reviews are typically written based on time spent with a retail review copy or review key for the game that is provided by its publisher.