So earlier I mentioned there were three games I got around the same time worth talking about. The second of these is Ghost of a tale.

Sometimes, as much fun as it is to shoot goons in the face or drive at light speed down impossible roads, you might find yourself looking for something much more sedate. In such a time, you may find yourself drawn to titles like Night in the Woods, or The Unfinished Swan - both titles thoroughly deserving of your attention - but, if youll allow me to opine for a moment, I think Ghost of a Tale might just be your next favourite chillout game.

That is, if you can get past the massive gameplay shift in the middle.

Right from the start, you get a firm idea of what the games strengths and weaknesses are. The game opens with text, and your adorable mouse protagonist, Tilo, getting up from the bed in his dingy cell. Its wonderfully-written text, and the cell is lovingly designed, but its text nonetheless, and great as the cells design is, it lacks the impressive technical prowess found in other more expensive games.
In short, the games budget is an omnipresent barrier that constantly pushes back against the games lofty artistic ambitions.
Once you escape the cell, youre treated to a sequence where you have to get out of the dungeon without being seen, and subsequently beaten up by huge rats. This forms the games tutorial, and it introduces the stealth mechanics that youll be playing with for just about a third of your playthrough.
During this sequence, youll learn that the NPCs have great dialogue and clear personality, your visual discretion stat makes almost no difference, you cant just be naked, all the animals are strangely to scale, and that the guards AI ranges from fairly dim to The Terminator. That said, once you finally manage to leave the dungeon and the game opens up somewhat, avoiding the rat guards becomes a substantially easier affair.

It was at about this point that the game threw its most impressive bug and feature at me in one and the same instance. See, Ghost of a Tale features a really quite pretty day/night cycle, and some lovely god rays, and its just so keen on showing you them that said evening-time god rays came up through the floor and blinded me for a little while. 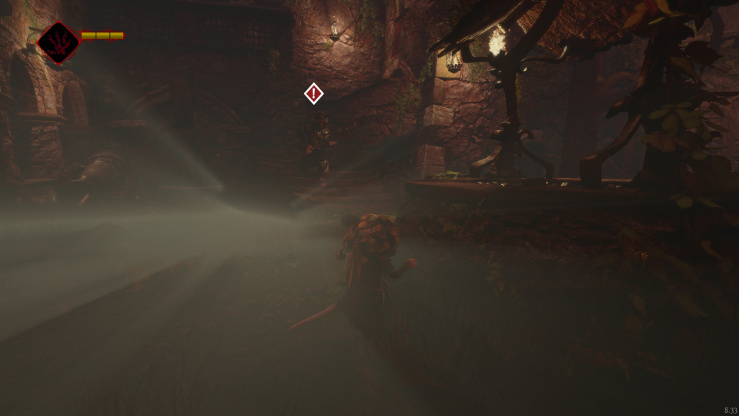 If you havent guessed yet, theres a not insignificant amount of jank to be found here.

From here on, youre introduced to the smithy, and to Silas, the former of which will give you items, and the latter is your faithful companion for the duration of the game. You may also meet the other mice in the game: the friendly cook Ouma Rezzia, and the dorky rapscallion bandits Gusto and Fatale. For the most part, Silas is the main quest-giver, and also one of the most well-written characters Ive seen in a videogame. Any and all dialogue opportunities with him are a delight.
However, once you meet Silas, youll get your first quest, which is to get yourself a suit of armour from different parts of the environment youve found so far, which the smithy will then adjust for you, so that you can walk among the rats as Private Scow - the shortest stormtrooper ever to use non-violence. 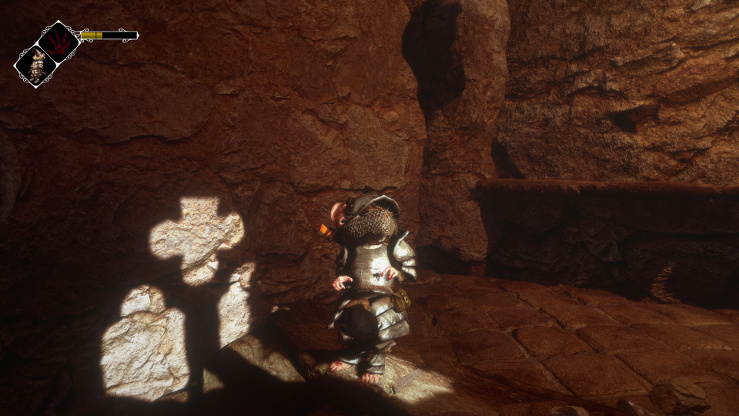 Herein lies that massive gameplay shift I mentioned. Up until now, Ghost of a Tale has been a stealth game with RPG elements, but once Tilo gets the armour, the whole affair turns into a Lucasarts adventure game. With the stealth element all but completely discarded, the game swiftly shifts gears and leans heavily on the newfound dialogue options with the rat characters, and a new mystery for you to solve.

Once the game reaches that part, youll face a series of quests that open up the environment of Dwindling Heights, but really, from that point on, the most interesting point for me was the massive guilt trip I experienced.
Surely, it must be a testament to the quality of the writing that about an hour after getting the suit of armour, I felt so sorry for ever wanting to stab the rats. See, whenever Im faced with a stealth scenario, I tend to follow the logic that a dead guard is less of a hassle than a live one, and that no guards is by far the preferable outcome. So imagine my surprise when I started to really empathise with them.
Ghost of a Tale goes out of its way to portray the ornery soldiers patrolling the castle, and all the other NPCs you meet, as sympathetic individuals, and by the time you get to the end of the game, youll find yourself feeling like one of the family.
The writing naturally extends to Tilo, too, who has a variety of dialogue options in many different interactions, none of which seem out of character for him, while also accommodating the players choices. It doesnt stop there, though, because theres lore.

As is the theme for the rest of the game, the lore present in Ghost of a Tale isnt anywhere near the scale of some other titles, but it makes up for it by keeping all the lore concise, snappy, and relevant to the game. The result is that each time a character says a word youve not heard before and its highlighted in yellow, chances are youll feel compelled to look it up. Its fun, I promise.

Its not all plain sailing, though. While I mentioned theres a few technical issues before, the gameplay has some caveats of its own, chief among them being some opaque mission scripting. At a handful of points in my playthrough, I found myself looking up a walkthrough of the game because I couldnt work out how I could possibly get a character to do something, only to find out that I had to do a story mission before the event I needed would trigger. In another case, I spent quite a while searching for an item, and ended up throwing myself down a hole and dying because - again - I needed to do another story mission.
Theres also a set of annoyances and quibbles that pop up in the game design. Perhaps the most egregious of these gripes is the armour, which until you upgrade it to maximum level, forces you to move with all the speed and agility of a mark 4 tank. This makes the act of mingling with the rats rather irksome in the early hours of gameplay. Theres also a not insubstantial amount of inventory tetris involved in playing Ghost of a Tale, and though your inventory is rarely - if ever - a problem, navigating it is rather cumbersome at times, and swapping out different items of clothing for maximum stats takes far longer than it should. Perhaps a quick costume wheel would sort that, but alas, its inventory time whenever you want to mix and match. Moreover, given that your outfits are such an integral part of your quests, its also a little disappointing that this necessitates a disproportionately high amount of fetch-quests. Throughout my time with the game, I found myself searching for identity discs, clothes, keys, bugs, and probably some other doodads Ive forgotten.
There also exists a slightly disappointing limitation in the environment itself, insofar that as nice as Dwindling heights is, it only ever feels like the tutorial area of a much bigger, deeper experience. Again, Im fairly sure that if Ghost of a Tale had the kind of budget that AAA titles have, Id be able to explore a much larger environment, but as it is, the wider world remains nought but flavour text in your small, cosy adventure.
Given the quality of the experience, its not that I necessarily felt cheated out of a bigger game, more that I really wanted to see what else this world had to offer.

I think if thats the ultimate take-away, then this game did something right.

I think theres something to be said for games that have undeniable flaws, but which still manage to leave a good impression long after the credits roll. The games that need just that little more time in the oven or just that precious extra bit of cash to fully realise what they wanted to do, but which you can appreciate for their clear strengths anyway. In that respect, Ghost of a Tale well and truly fits the bill: a solid adventure throughout, with twists and turns, and rock-solid gameplay, which falls short of a glowing review by way of a few rough edges. Its a good time from start to finish, just one with a few caveats along the way.

The bottom line is that Ghost of a Tale is well worth your time. Now, if youll excuse me, I have some rats to talk to.

If you enjoyed this Ghost of a Tale review, you're encouraged to discuss it with the author and with other members of the site's community. If you don't already have an HonestGamers account, you can sign up for one in a snap. Thank you for reading!

© 1998-2021 HonestGamers
None of the material contained within this site may be reproduced in any conceivable fashion without permission from the author(s) of said material. This site is not sponsored or endorsed by Nintendo, Sega, Sony, Microsoft, or any other such party. Ghost of a Tale is a registered trademark of its copyright holder. This site makes no claim to Ghost of a Tale, its characters, screenshots, artwork, music, or any intellectual property contained within. Opinions expressed on this site do not necessarily represent the opinion of site staff or sponsors. Staff and freelance reviews are typically written based on time spent with a retail review copy or review key for the game that is provided by its publisher.