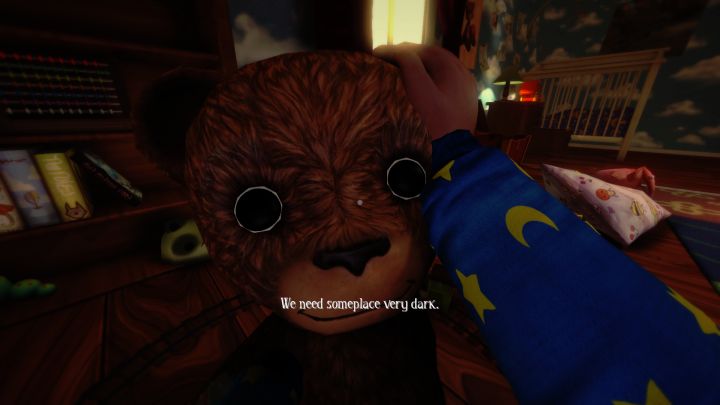 Among the Sleep puts you in control of the most unlikely horror game protagonist: a toddler. Maybe most of you forgot, but the world was a pretty frightening place when you were still a wee one. Separation anxiety was still a thing, and the darkness hid unknown terrors. For this kid, though, the things that go bump in the night aren't merely figments of his imagination. You realize this when you walk into a closet early on in the proceedings and discover a whole other world within it, where coats resemble over-sized monsters and a suspicious liquid outlines an ominous pathway for you.

But then your mother rescues you from the wardrobe and puts you to bed, and things return to normal. You and your new best friend, a teddy bear you received for your birthday, can rest easy.

Of course, supernatural forces don't like to be ignored, so they come into your room that night and abscond with your bear. Your crib then slides to the middle of the room and falls over, and you tumble out. The house is now completely dark, save for a running television in the living room. Plus, both your mother and your monster-scaring stuffy remain missing. What do you do? 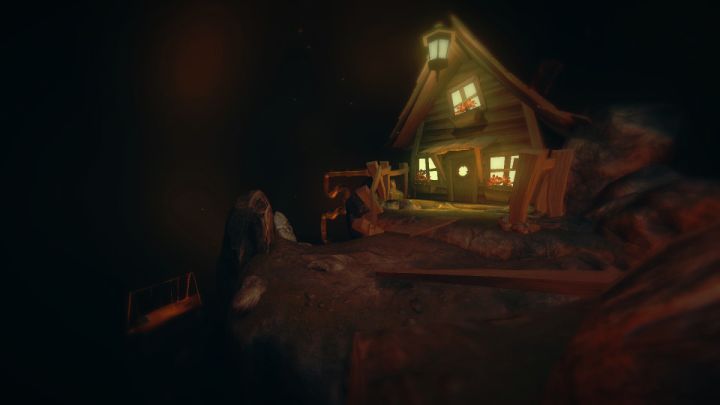 Explore, and hope you aren't carried away by some child eater. Right away, this game puts you on edge, placing you in control of a child who shouldn't be left alone to voyage through a house where he can easily perish (even without sinister forces present). The first area gives you a little taste of what to expect from the rest of the affair. You mosey about a fully searchable home, with little surprises and narrative hints dropped pretty much everywhere. You open a cupboard to see what's inside, and begin to form theories. Or venture into the living room, and a lightning flash reveals something ghastly watching you from the dark corner.

After you've explored this section in earnest, you hop right into the guts of the campaign. A slide-like tube ushers you into a boogeyman's realm, where everything defies the laws of nature. A small playhouse serves as a hub for other stages. Childhood memories twist into monstrous worlds that are terrifically decked out with demonic little touches everywhere. The first level, for instance, is a nightmarish playground where toys move on their own and giant wooden owls silently watch you, as if judging your every move. Each level is perfectly lit, too, leaving just enough darkness outside of main pathways that you often wonder if something isn't going to crawl out from the shadows. Your teddy often comes in handy during these segments by acting as a flashlight when you hug him.

However, that stage doesn't hold the nightmare fuel found in other levels. Another one takes you through a marsh where you hear the occasional splashes of water all around. You sense things watching you from the bog, and now and then you can see lumps bobbing up and down. You don't know whether or not they're huge air bubbles or the spherical heads of kappa-like imps. Really, neither one is preferable. At multiple points through this area, you encounter simple obstacles that slow your progress just enough to get your paranoia going. You might bump into a gate, realizing that you need to maneuver the mouse a certain way to open it. Meanwhile, a whoosh of water behind you could be a predator looking for baby meat, or a trick to get your knees knocking. 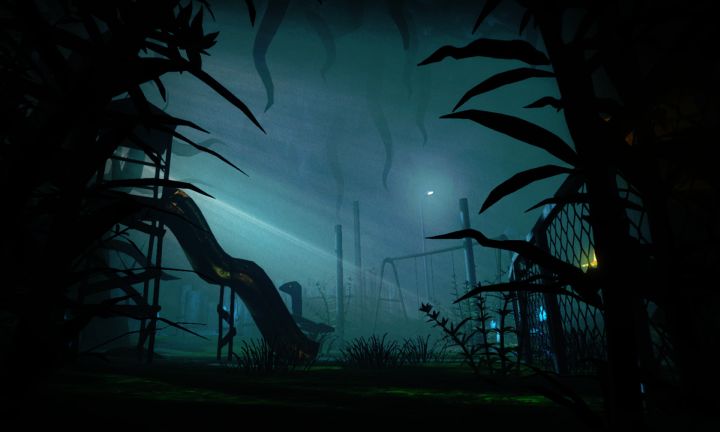 This area also properly introduces the main antagonist, a banshee-like black specter with wild hair that occasionally chases you. Unlike your standard walking simulator, you don't get to hold the Shift key and sprint away. Bear in mind, you've got tiny legs and their muscles haven't fully developed. Not only can you run only so quickly, but you occasionally plop onto your belly when you've held Shift for too long. Nothing gets the blood going like darting away from the wraith, only to thud onto the ground mere feet in front of her. That's when she seizes you, roars into your face and the screen fades to black. Worst of all, you have no way of fighting back. How could you? At best, you could maybe gum or headbutt her if she got close enough, but even then what's a tiny bump to a raging nightmare?

No, this isn't Alicemare, where you meet a gruesome end. Instead, respawn at a checkpoint upon death. Besides that, Sleep's challenge factor isn't all that intense. Though a few scenes might stump you, eluding foes isn't really a tough task. More than anything, this adventure sports a balanced difficulty rating, featuring situations that are just challenging enough to raise the hairs on your neck, but not so tough that you'll want to dismantle your computer and set it ablaze.

The final area provides one chilling section, where glass bottles dot the corridors. If you toddle into one and knock it over, you alert some ghostly horror that comes to snatch you away. I'm not sure if it's the same beast seen in the previous level, because I made damn sure either not to knock over a single bottle or to hide quickly if I did. It also helps that you can pick the bottles up and set them on the ground. You just have to make sure you don't knock others over while attempting to do so... 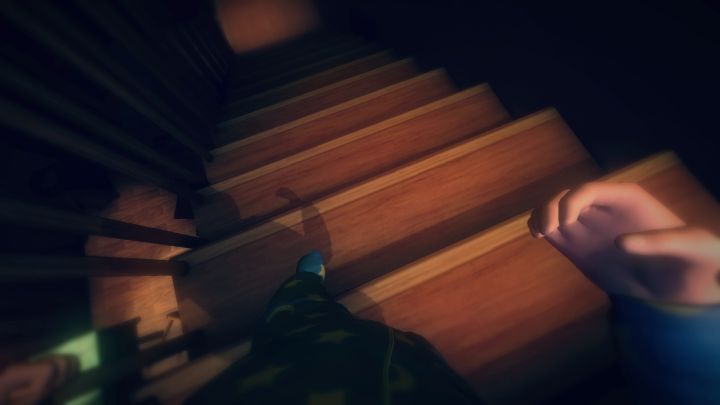 As the campaign draws to a close, a few heart-shattering scenes play out. If you explored the kitchen during the early phases, then you probably already know what the game's big twist entails. Although it's somewhat predictable, it's no less downbeat. Horror stories seldom end on a high note, and the best you can usually hope for is a bittersweet conclusion. In that respect, Among the Sleep nails its ending, mainly because it implemented a (predictable) twist wasn't as important as closing segment's overall impact.

This is a brief thrill ride, so you shouldn't expect to spend much more than two or three hours playing it. Even still, that short amount of time offers just enough genuine scares and well designed levels oozing with dark sensibilities. The depressing conclusion is a proper, poignant touch that any horror story would need. Protagonists in horror stories don't usually earn much of a victory, and that's definitely true here. I think the tagline for "The Texas Chain Saw Massacre" put it best: "Who will survive and what will be left of them?"

If you enjoyed this Among the Sleep review, you're encouraged to discuss it with the author and with other members of the site's community. If you don't already have an HonestGamers account, you can sign up for one in a snap. Thank you for reading!

© 1998-2021 HonestGamers
None of the material contained within this site may be reproduced in any conceivable fashion without permission from the author(s) of said material. This site is not sponsored or endorsed by Nintendo, Sega, Sony, Microsoft, or any other such party. Among the Sleep is a registered trademark of its copyright holder. This site makes no claim to Among the Sleep, its characters, screenshots, artwork, music, or any intellectual property contained within. Opinions expressed on this site do not necessarily represent the opinion of site staff or sponsors. Staff and freelance reviews are typically written based on time spent with a retail review copy or review key for the game that is provided by its publisher.