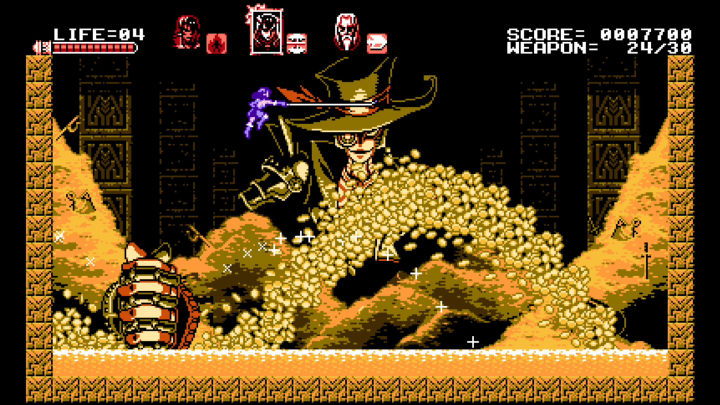 The original Castlevania timeline is dead and gone. Even its replacement, Lords of Shadow, met its own untimely end. Konami has shown little interest in reviving either series over the years, save for Japan-only arcade, mobile and pachinko titles. Some fans have buried the franchise and their hopes along with it, and moved on. However, if you follow modern horror at all, you know that iconic fiends never stay dead for long. Following a tear-filled funeral, lightning struck the brand's grave, and a hand tore through the earth. The series, now reborn as Bloodstained, would live again.

It came first in the form of a retro 8-bit love letter called Curse of the Moon, harking back mostly to the NES title Castlevania III: Dracula's Curse. This game sports everything you would want in a faux-retro throwback to the series' third entry: old school sprites, dark environments, familiar enemy AI routines, recruitable characters, level branching and badass bosses. It even controls very similarly to its early '90s cousin, complete with sub-weapons and stiff jumps that you cannot control midair. For some, that feature is a deal breaker, and that's fine. Personally, I've always appreciated the "committing fully to a jump" style of the original titles.

That might scare off some who aren't looking for a blistering challenge factor, but please understand that this title is more fair than its inspiration. Not only does it include two initial difficulty settings, but the campaign itself doesn't stick you with the horrendous trials seen in Dracula's Curse. Don't get me wrong; you'll encounter your share of difficult scenes. For instance, the final stage features sections where a strange, environment-destroying wave obliterates platforms. If you're not quick enough, it'll erase the very floor beneath you, and that'll be it. Other portions pit you against the classic tight ledges and loads of enemies coming at you. Ghosts and giant toads love knocking you off these structures, killing one of your party.

When a character perishes, you don't immediately lose a life. Instead, that particular ally becomes temporarily unusable. Assuming you have a full crew, you can die up to four times before the game subtracts a life. 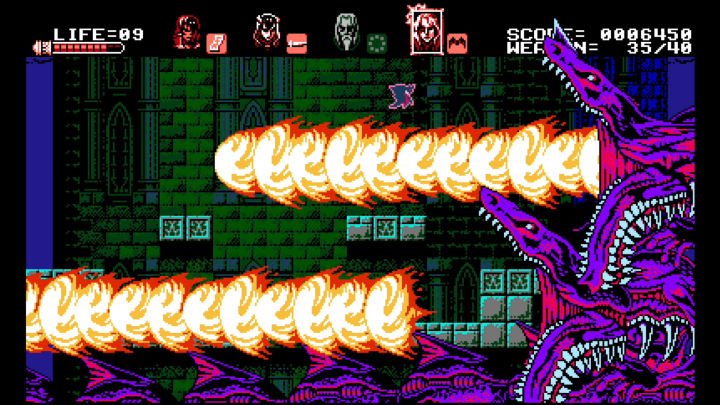 This is assuming you actually joined forces with these folks in the first place. When you meet additional warriors, you don't need to recruit them. For instance, you might consider murdering them so protagonist Zangetsu can earn a new ability. However, if you're not the heartless type and you want added challenge, you can also leave your new partners where they stand, declining to either kill them or befriend them.

Bear in mind, though, that Zangetsu is an unremarkable hero on his own. His sword's short reach leaves him susceptible to blows, and his sub-weapons are merely decent rather than stellar. Honestly, I found myself using him less frequently as the campaign wore on, because his partners had more strengths to offer. One of them plays like a classic Belmont, complete with a whip and sliding ability, plus she can run more quickly and execute higher leaps Your other two buddies play like Sypha and Alucard from Dracula's Curse, with one using handy spells as sub-weapons, and the other transforming into a bat that can bypass whole set pieces.

Sometimes, though, you don't want to take short cuts, partly because the levels offer rewards, but also because they're that well-built and entertaining. Seriously, this title is at its best when you're surviving close shaves and staring peril right in the eyes, facing whatever challenges come your way. Some of these alternate routes thrust you into trap-ridden gauntlets, equipped with saw blades and archers who make every inch of real estate a living hell. Other segments pit you against giant foes that require either timing, patience or a freeze spell to defeat. But the best thing about these levels is that they branch ever so slightly, allowing you to access and explore variant paths. Some of these regions also hold items that permanently bolster your stats as well, allowing you to take more damage, use additional sub-weapons or dish out punishment like never before. 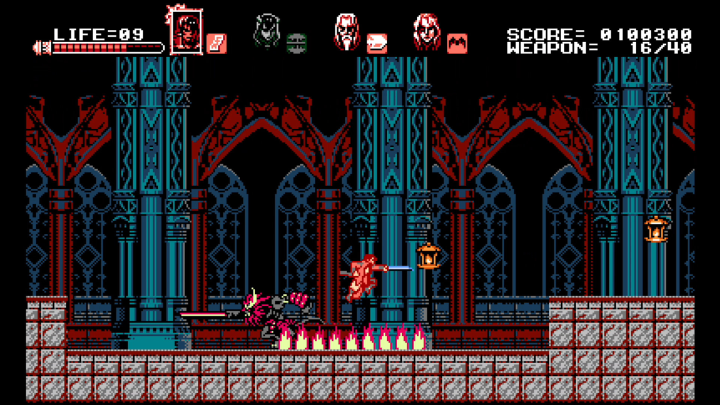 The real star in regards to stage design, though, is the presentation. Not only are we dealing with dark, brooding level themes, but those that would be right at home in the original Castlevania collection. If you told me that stage one was original planned for an NES installment but ended up on the cutting room floor, I'd believe it. The cloudy, dark blue skyline and ominous woods in the background scream Castlevania. The ghostly train and massive golem boss engine-golem boss encounter could very well have been part of any Belmont's quest. Whether you creep through an ice cave or negotiate the sails of a phantom ship or explore the hallways of a vain vampire, all of the locations you visit don't just smack of the hallowed franchise, they may as well be officially part of it.

When you take on standard foes, you know they're just redressed monsters from the original series with slight modifications. Even the dreaded Medusa heads, flea men and axe knights return in some form, although sans much of their original cheapness. The Medusas, for instance, are easier to avoid and kill than before. Sub-weapons also stir memories of huddling with friends in front of a TV, two-button controller in hand, sweat glistening on your brow as you hope against all hope that you grabbed the right side-arm to deal with the upcoming boss. Even bosses bear the Konami mark, hitting you with pattern-oriented routines and techniques that seem insurmountable, but really boil down to observation and practice. 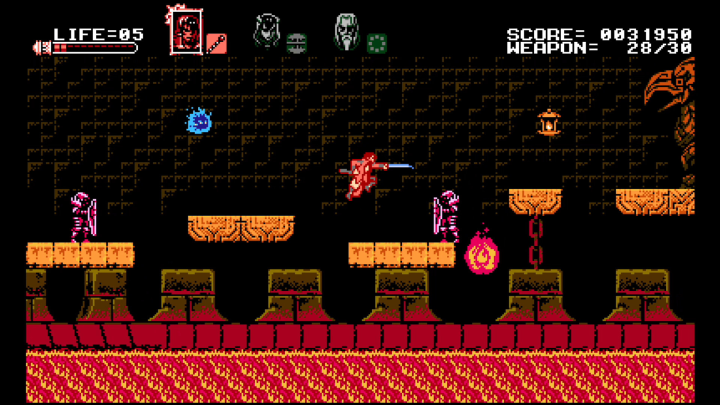 But unlike so many other spiritual successors and inspired products, Curse of the Moon has its own identity to maintain. A boss might fight like one of Dracula's henchmen, but they die in more spectacular fashion, utilizing nearly unavoidable super moves before exploding to burning bits. Everything from the lore to some of he enemy design stands apart from Castlevania, focusing less on Gothic horror and Transylvanian stereotypes and more on demonology and Goetic creatures. So many other, smaller dazzling touches come into play throughout your journey, reminding you this series is a beast unto itself.

I really hope this franchise doesn't end with its second entry, Ritual of the Night, because this could be the dawn of a new era for Castlevania. Like any greedy child who loves spooky things, I want to see more. Perhaps developer Inti Creates can go a step further and give us a Simon's Quest knockoff that's superior to its inspiration, or revive the forgotten remains of the 3D installments. Whatever they choose to do, I only hope they infuse it with as much love as they did in Bloodstained: Curse of the Moon.

If you enjoyed this Bloodstained: Curse of the Moon review, you're encouraged to discuss it with the author and with other members of the site's community. If you don't already have an HonestGamers account, you can sign up for one in a snap. Thank you for reading!

© 1998-2021 HonestGamers
None of the material contained within this site may be reproduced in any conceivable fashion without permission from the author(s) of said material. This site is not sponsored or endorsed by Nintendo, Sega, Sony, Microsoft, or any other such party. Bloodstained: Curse of the Moon is a registered trademark of its copyright holder. This site makes no claim to Bloodstained: Curse of the Moon, its characters, screenshots, artwork, music, or any intellectual property contained within. Opinions expressed on this site do not necessarily represent the opinion of site staff or sponsors. Staff and freelance reviews are typically written based on time spent with a retail review copy or review key for the game that is provided by its publisher.