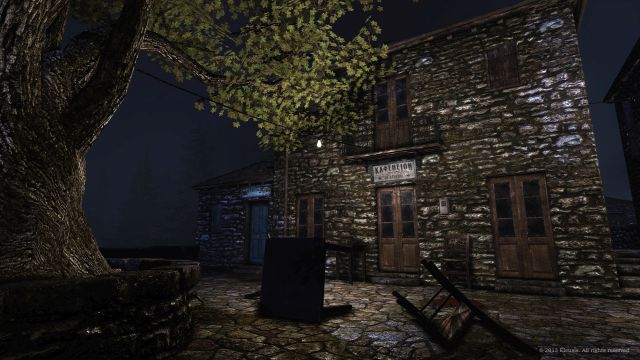 For a while, I couldn't quite put my finger on what I didn't like about the first-person horror game Eleusis. I mean, it's fittingly dark, atmospheric and sometimes tense enough to seem like a smart, scary point-and-click. Plus, the game doesn't anally direct you through its campaign, leaving you to solve most of its puzzles on your own. And it features a lot of them, too. Mostly, they consist of scouring the open grounds for event items and using them in various places, sometimes hiding the goods in unlikely locations.

And yet, the experience remains a slog, no matter how many clever challenges or "scary" scenes it throws your way. For the most part, the flaws boil down to two things: pacing and payoff.

Effective slow-burn horror pieces usually abide two major rules: use spooky, enthralling storytelling to gradually build tension, and give the audience one hell of a scare during the final act. Don't squander your withheld frights on a tame, anticlimactic finish, but absolutely go for broke in the closing moments. Think less "Friday the 13th" and more "Session 9" or "Don't Look Now." In this case, Eleusis makes too good on the slow part, and doesn't lead to a big enough bang to make its slack pacing worthwhile.

For the most part, you spend the campaign searching for items while nothing happens. Although the terrain you search is wonderfully eerie, with moonlight glistening off cobbles and streams, you venture to basic, run of the mill digs. You rifle through the owner's belongings, hoping to find something that might further the story. Occasionally you happen upon an object, then rush off to try it out in a variety of places to see if it triggers an event. Sometimes, though, necessary goods are too well hidden and easily overlooked. For instance, you must secure some matches at one point and can't find a box of them anywhere. You'd think they'd be at the general store, when in actuality they're kept in a storage compartment carved into a gravestone--the last place you'd expect them to be. 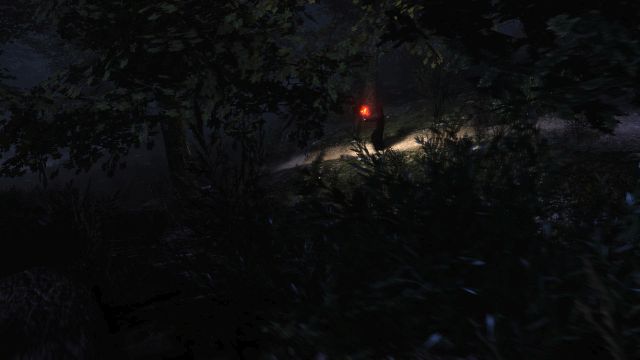 During another excursion, you've got to nab a shiny object out of an outhouse loo. You don't know how to reach it, and your game-wide search proves fruitless. As it turns out, you're supposed to use a screwdriver on a radio to get the magnet out of it, and use that to procure the event item from the pile of poo. The worst section, though, involves obtaining five pieces of a religious symbol, the locations of which are marked on a map. However, when you check those places, you don't see squat. The game neglected to tell you (only briefly mentioned it, anyway) those bits are buried, and the mounds holding them are nearly indiscernible from the rest of the ground. Also bear in mind that this game takes place at night and the ground is just as black as your surroundings. You need to shine your light on just the right area and squint to be able to see these spots.

You spend a tremendous amount of time hunting these treasures down, and the constant collecting grows monotonous after a while. At times, I contemplated giving up because I was having difficulty focusing. My mind often wandered during the slower segments, and I found myself unlocking my phone or thinking of how wonderful it'll be to start a different horror title once I push through this one...

Don't get me wrong; some of these puzzles actually are well constructed. At one point, I needed to break into a room in the mayor's house and didn't possess a key for it. Instead, I had to place a couple of bike spokes in a vice to make a lockpick, then use that on the door. Once inside, I read some material that outlined how to properly brew a potion, which I completed by adding certain ingredients found throughout the village to a mortar and pestle. 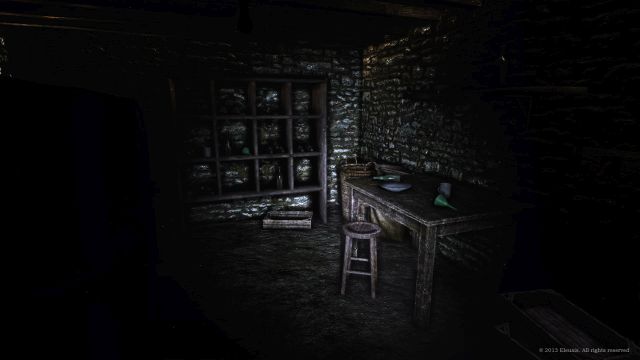 Scares are few and far between, and even then you meet with fairly flaccid frights. During a few segments, you grab an event item and a wolf appears. If it so much as touches you, the game ends and you'll need to reload your file. However, it has to catch you first. Escaping the wolf is easy, as all you need to do is run. Seriously, if you jog in a straight line away from the wolf, it won't catch you. You can then take other precautions to stymie the beast, such as climb uphill or leap over moderate obstructions (e.g. picnic tables, logs, etc.) and the creature will slow down enough that it'll eventually despawn.

The same rings true for cultists who appear after you're about halfway through the campaign. These guys patrol the premises while clutching torches, threatening to roast you alive if they see you. Thankfully, you can spot them from a mile away, and they're easily avoided by just not getting in front of them. If you gently walk a little ways off to the side, they won't even notice you're there. And much like the aforementioned wolves, you can easily slink away from them when aggroed. Rather than serving as a device to drive your fear or add challenge, they're nothing more than nuisances that force you to move about ten feet off the main path occasionally.

Oh, but here's the best part. You can turn off NPC threats in the options menu, transforming the game to nothing but a bunch of item-driven puzzles. This decision doesn't decrease the challenge factor significantly, as it only cuts out a few scenes where you either need to run in a straight line or move several feet to the right when walking. 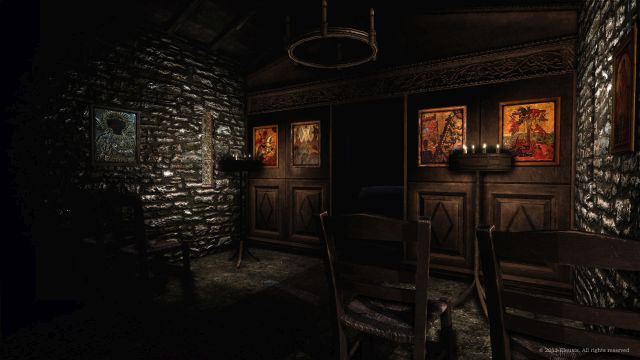 Finally, you make your way to the conclusion, where you explore a cave that serves as the cultists' base of operations. After one solid scare, you glimpse the predictable ending, wooden voice acting and all. All of the slow-burn build up should've led to an explosive, terrifying conclusion. Instead, one of the antagonists confirms what you've suspected all along and leaves you with a choice that'll lead to one of two different closing cinematics--neither of which really feels like a fitting payoff to tedious trudge you endured.

Eleusis is not a bad game; let's be clear on that. However, it's also not a good one. It lies somewhere in the middle, providing you with enough early tension and magnificent atmosphere that it could've been a legit horror experience, had it featured a more intriguing story and better scares. Instead, it tries to blindside you with a revelation that anyone could've seen coming, and the busywork leading up to it feels like padding as result. Unless you absolutely love games with tons of item puzzles, I'd suggest giving this one a pass.

If you enjoyed this Eleusis review, you're encouraged to discuss it with the author and with other members of the site's community. If you don't already have an HonestGamers account, you can sign up for one in a snap. Thank you for reading!

© 1998-2021 HonestGamers
None of the material contained within this site may be reproduced in any conceivable fashion without permission from the author(s) of said material. This site is not sponsored or endorsed by Nintendo, Sega, Sony, Microsoft, or any other such party. Eleusis is a registered trademark of its copyright holder. This site makes no claim to Eleusis, its characters, screenshots, artwork, music, or any intellectual property contained within. Opinions expressed on this site do not necessarily represent the opinion of site staff or sponsors. Staff and freelance reviews are typically written based on time spent with a retail review copy or review key for the game that is provided by its publisher.