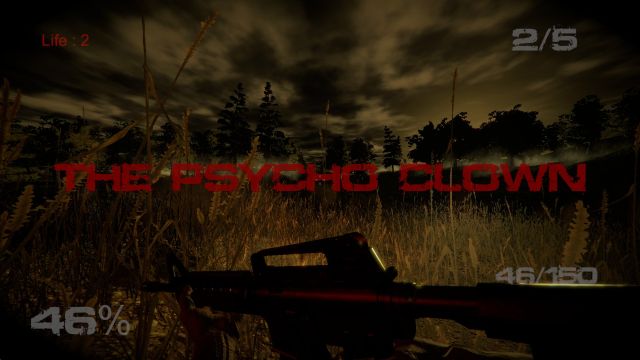 Imagine if Slender: The Eight Pages were a frenetic shooter instead of a spooky stationery collector. Now, imagine this hypothetical shooter is also bad, and you've got ALPAGES: THE FIVE BOOKS, an FPS where you gun down stock enemies while snagging the five titular tomes. Also, there's a clown, a farm, crying children and depressing landscapes.

There's no plot setup or anything like that when you begin. You select new game and appear in a grimdark environment, surrounded by weeds, fog, grayish-brown clouds and sadness. I'll admit, it's actually a good start for a horror game. Unfortunately, zombies come along to ruin that "good start" with their 845354th appearance in the genre. Congrats, guys! One second, you're admiring the goth kid's high school painting that is the world around you. The next, you're sighing and thinking, "God, not again."

Nevertheless, you leap right into your expected role, pulling out your rifle to take a few choice shots while running. Except something doesn't seem right, and you can't put your finger on it. It took me a few minutes during my playthrough to realize you can't literally run 'n gun. Whenever you shoot, the run function disengages and your character plods along at a moderate (read: dangerous) pace to pop off a few bullets. Worse than that, the transition from "run mode" to "shoot mode" is horrendous. You physically have to stop running, get your gun into position and wait for the camera to catch up with the action. Meanwhile, the dead are bearing down on you, sweet lord can't you move any faster, game? Why are you so under-responsive? Seriously, I once clicked the fire button four times while armed with the shotgun before even seeing a single report. I nearly got dogpiled because of it. 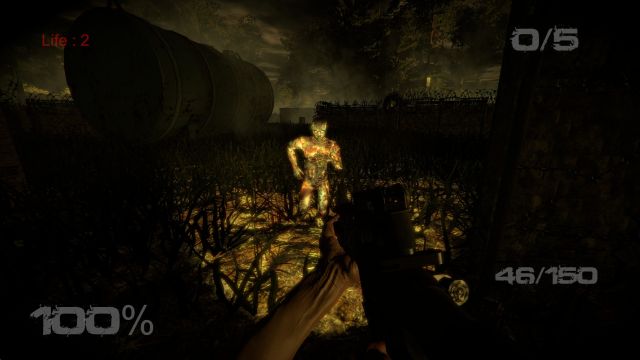 The stilted run 'n gun mechanics do more than bump up the game's difficulty rating. For one thing, they kill the pacing just about dead in its tracks. Where ALPAGES could've been a snappy, thrilling roller coaster of a "Slender-like," it's instead an awkward shooter that leaves you contemplating whether or not combat is even worthwhile. Spoiler: It isn't. In fact, you can actually finish this game without even using a bullet. That notion leads me to believe that these first-person shooter elements are merely tacked on; placed there to give the game a false sense of depth, action or interactivity.

Zombies, as it turns out, are not your only obstacle. You also face off against killer animals--sometimes without their skin--and whatever bosses you happen to unleash. You see, every time you grab a book, red, scary words appear on the screen. Nab number one and THE WITCH pops up. I've ragged pretty hard on mechanics thus far, so I'll dish out a little praise: The Witch is actually pretty terrifying. She appears every now and then, slowing movement to a near halt so she can belt out a banshee scream that would make Tom Araya beam with pride. Not long after that, demonic dogs begin to materialize around you, dramatic music kicks up and a child begins crying in the most heartbreaking way. The first time I encountered this, my heart thumped hard in my chest and didn't slow for a minute or two after the onslaught was over. The assault on the senses I received was grade-A horror material.

Everything else, though? Meh...

The other books summon a crazed clown who chases you incessantly, a teddy bear who does something (I'm not sure what because he's easy to avoid) and a dryad-like plant monster who attempts to slow you down by sprouting her tendrils out of the ground in front of you. That last one sounds like it could create some good tension, until you realize you can easily avoid its vines by running diagonally. 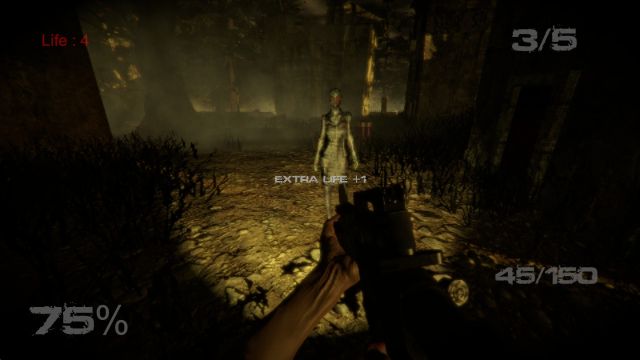 In fact, most of your woes can be avoided by just running and occasionally changing your course, only stopping to either secure a book or take one of the many power-ups that randomly spawn around you. Need health? Grab a red plant, because they fully revitalize you. Need ammo? It's all over the place. Need an extra life? Explore a tad and memorize their locations, because they always appear in the same places. In fact, when you lose a life, any extra lives you grabbed before return to their positions, so you can easily game the life system and never see a 'game over' screen.

Hell, memorization is half the game. The five books appear in the same places each time, and you just need to remember how to get to them. They're all easy to collect, because four of them are out in the open. Only one sits in a panic-inducing location, stowed away in a maze of barbwire-lined brick walls. I've died a few times either getting that one or attempting to escape, because the zombies and their clown buddy cornered me and hacked me to bits. 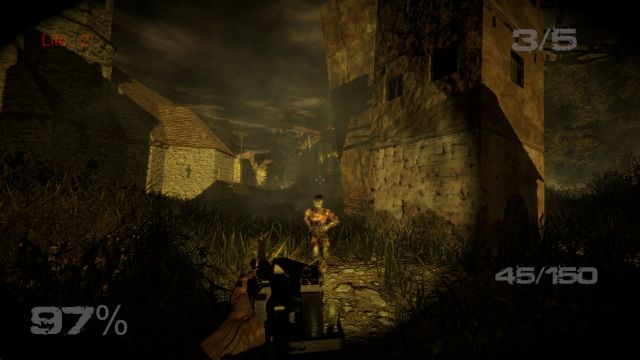 When you've obtained all of the books, all you need to do is wait for the witch to appear again and put a bullet in her. YOU WIN!, the screen proclaims! Triumphant music blasts, Slo-Mo kicks in and enemies crowd futilely around you, not realizing they've lost and now have to do the Walk of Shame back to Hell.

A few seconds pass and the title screen kicks up again. Want to play again? No? I don't blame you. I'll give ALPAGES credit for sporting some good, legit scary stuff. However, its clunky mechanics, lack of content and reliance on tired tropes serve only to hamper the overall experience. Yeah, I'd recommend this one over cheapo Steam shooters like Abasralsa or 24 HOURS, but I'd also endorse staring at a blank wall over playing those games, so such a recommendation isn't saying much...

If you enjoyed this ALPAGES: THE FIVE BOOKS review, you're encouraged to discuss it with the author and with other members of the site's community. If you don't already have an HonestGamers account, you can sign up for one in a snap. Thank you for reading!

© 1998-2021 HonestGamers
None of the material contained within this site may be reproduced in any conceivable fashion without permission from the author(s) of said material. This site is not sponsored or endorsed by Nintendo, Sega, Sony, Microsoft, or any other such party. ALPAGES: THE FIVE BOOKS is a registered trademark of its copyright holder. This site makes no claim to ALPAGES: THE FIVE BOOKS, its characters, screenshots, artwork, music, or any intellectual property contained within. Opinions expressed on this site do not necessarily represent the opinion of site staff or sponsors. Staff and freelance reviews are typically written based on time spent with a retail review copy or review key for the game that is provided by its publisher.