The One Piece manga has been running through three decades going on four, is on the verge of reaching 1000 chapters, has an anime adaption with over 900 episodes and is celebrating its own 20th anniversary... and there's no sign of this beast slowing down in the foreseeable future. As for something that's also considered popular and a money maker, there's bound to be tons of merchandising, and video games are no exception. The rubbery Monkey D. Luffy and his Straw Hat pirates have sailed across several consoles and handhelds; there's side-scrolling platformers, fighting games, a friggin' baseball release, and full-scale battle titles made by the creators of the Dynasty Warriors IP, to name a few. So, of course, One Piece eventually got a VR game to its name.

With 2018's Grand Cruise, you're given the chance to see the Straw Hats up close on their ship, the Thousand Sunny. Unfortunately... it's the type of adventure where you don't actually play the main cast. The devs, or whoever made this bewildering call, thought it would be a more engrossing experience to have you in the role of a rookie pirate joining the crew. A very missed opportunity, as it would have been fun using the Move controllers to mimic Luffy pummel countless marines and pirates with his elongated attacks, use the exceptional swordsman Zoro to slash away, or have Usopp command his 8000 followers. 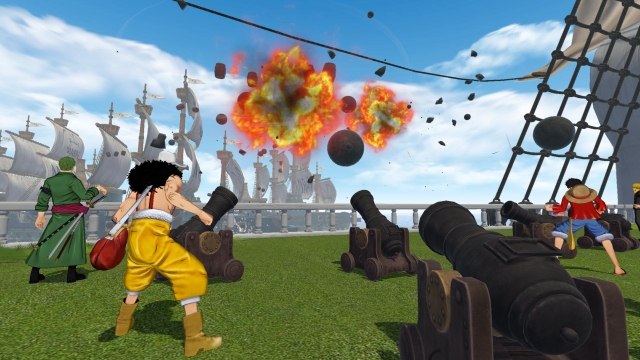 If you ignore that odd lapse in judgement, the possibilities for an entertaining VR One Piece game with a "self insert" character could have come to fruition. Unfortunately, the game feels less like a VR title with actual ideas and concepts, and more like the worst tease ever, for VR players and One Piece fans. The naval battle scenario, for example, begins in the center of the deck where the captain, Luffy, introduces himself and his crew, the Japanese voice cast in tow. Afterwards, you're given the option to explore the ship. Great! An opportunity to actually explore the Thousand Sunny at a personal level. Except that's not how it goes. The game gives you three to four spots, and you just warp there after a selection. You don't get to manually move around the ship, not even in locomotion-style.

You know what's worse than not being able to move around? You can't truly interact with people or objects. Regardless of the location on the ship, you're always stuck in one spot and just have to wait it out until the scripted scenes conclude. The only "interactions" you get are through staring at specific objects, at faces to illicit a "What are you looking at?" response, or to answer basic questions that alter nothing. I guess the developers thought standing beside Brook, the undead, skeletal musician, or sitting really close to Nami, the bikini top-wearing navigator, was good enough for a "virtual" experience. At least in other VR games where you're stuck in one spot, the devs had the decency to allow real interactivity, such as actually fiddling with things, throwing them into other stuff, or just waving your hands around like an idiot. 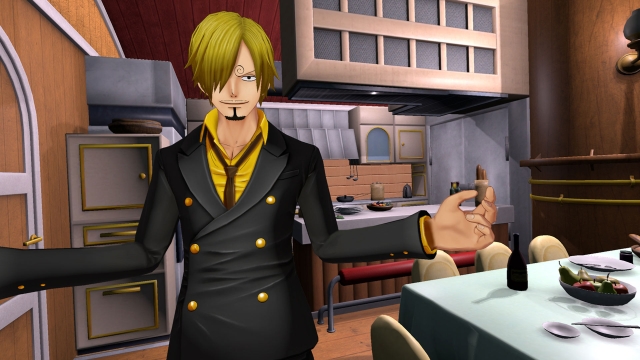 The disappointment doesn't let up when you finally encounter marines, either. In a decision that makes absolutely no sense within the context of the series and its main characters, you do naval battle with... traditional cannons. Other ships attacking with cannons? Sure. But the Straw Hats just use their own abilities. It's not even a good cannon battle, either; for approximately three dull minutes, you aim and fire nonchalantly at cannonballs and other objects heading towards your ship. At some point, someone from the main cast performs a special attack... once... but then it's back to more tedious cannon action. This battle is treated as a competition between you and another rookie team to get the most points, but unless you're really, really bad at hitting things, you likely won't lose. Even so, there's AI helpers shooting cannons, so there's barely any skill involved. Then that's it. Stage over.

The worst part about that artillery fight? The Thousand Sunny actually has one cannon in its lion figurehead that, after charging up, shoots a powerful beam. Guess what? Not once is it used in this cannon battle.

What's the other stage like? Basically the naval battle: a tedious introduction, options to pick a room with very little interactivity, which then segues into a battle with a kraken, all of which concludes in about ten minutes. If anything, this one is easier than the cannon confrontation because the monster is so huge and close to the ship. You can't miss. The other notable difference is that you get to watch Luffy fight a recognizable foe from the series, Doflamingo. Emphasis on watch. The game wants you to believe you're in the midst of it, as one moment has Doflamingo shooting projectiles at you, but they just pass by regardless of your positioning. Then that's it. Stage over. Any replay value whatsoever? The devs' idea of "replay" is forcing you to redo an entire stage just to enter a previously unexplored room. That's right... only one room allowed per playthrough.

Whether you're into One Piece or a gamer looking for something interesting in VR, Grand Cruise offers a very sterilizing experience that's sure to bore the most hardcore of both fandoms. You don't get to play the main characters, you don't get to see said characters at their best, interactions are borderline nonexistent, and actual conflicts are more like afterthoughts. The strangest part is that this was by Spike Chunsoft, who previously made a free VR demo for the Danganronpa series and, prior to that under their former Spike name, released the Dragon Ball Xbox Kinect title in 2012. That's not to say a great game is to be expected, but you think with past experience, they would bring a little more to the table this time around. They brought less. Bizarrely, if you want a closer bond with the Straw Hats, you're better off playing the other, non-VR One Piece titles on the PS4.
1.5/5

If you enjoyed this One Piece: Grand Cruise review, you're encouraged to discuss it with the author and with other members of the site's community. If you don't already have an HonestGamers account, you can sign up for one in a snap. Thank you for reading!

© 1998-2020 HonestGamers
None of the material contained within this site may be reproduced in any conceivable fashion without permission from the author(s) of said material. This site is not sponsored or endorsed by Nintendo, Sega, Sony, Microsoft, or any other such party. One Piece: Grand Cruise is a registered trademark of its copyright holder. This site makes no claim to One Piece: Grand Cruise, its characters, screenshots, artwork, music, or any intellectual property contained within. Opinions expressed on this site do not necessarily represent the opinion of site staff or sponsors. Staff and freelance reviews are typically written based on time spent with a retail review copy or review key for the game that is provided by its publisher.