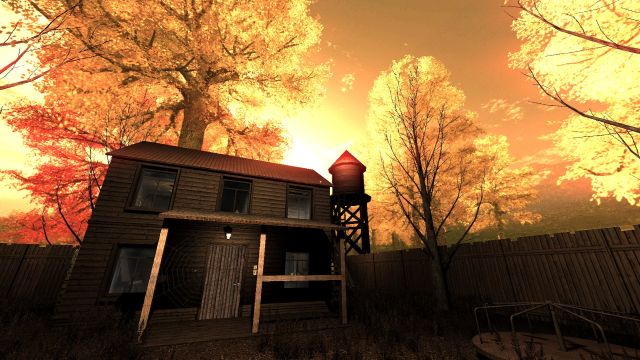 GDNomad and Infernal Dream are back with their another asset flip first-person adventure entitled Autumn Dream. If you've played any of their other horror games, then you'll know what to expect: a creepy house, dinner, sleeping and things going haywire before you run screaming from the premises. Throw in a few application crashes now and then, and you've got a text book GDNomad product.

This time, you play a nameless beneficiary who inherits a cabin in the woods, as confirmed by an early-game letter written in broken English. After turning away from your reading material, you can soak in the gorgeous autumnal scene around you. Browns and reds really pop, giving you a view to a place I think most of us would want to visit. Of course, all of this visual arrest eventually dies in a violent crash when you ascend a set of stairs and get a load of the world around you. The environment past your property is a single texture that's way out of proportion with your front yard. Apparently kaiju-sized trees lie outside of your land, way off in the distance.

After you soak in the initial sights, you blast through a lot of recycled objectives. First, you need to find a key to unlock the front door... Just like in White Mirror and The Lost Souls. Hell, I've actually played several cheapo horror games--not just ones by GDNomad--that start with the protagonist needing to locate a key or break into a house. Why does this need to be a goal at all, especially one so overused? I honestly don't get it; why do so many horror games begin this way? It's not a particularly effective, necessary or engaging concept, and it never leads to anything interesting and always comes off as padding or busywork. 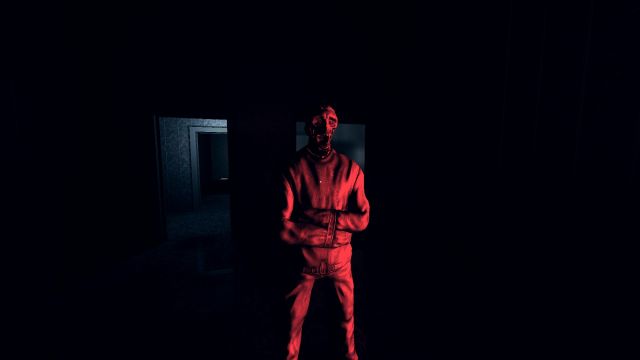 With the front door open, you mosey onward and our hero complains about being hungry and tired, just like in White Mirror. So you search for something to eat and shove off to bed, snoozing until someone rings your doorbell. You get up to investigate it and find a trail of lanterns leading to the ominous basement that your late aunt told you not to enter. Because of course you're going to enter it, like any story with a forbidden room or part of a house. This time, though, you end up getting dragged into the depths rather than going of your own volition. I'll admit, this scene is actually almost effective, until something laughs hysterically in the darkness, not unlike one of the creatures from the movie "Gremlins."

You awaken in some kind of facility, and it's here that the game almost impressed me. For one thing, the hallways of the test facility actually look grim. There's a glossy sheen on all of the surfaces, as if this is a well-funded outfit, even though the lights are turned eerily low. You can bet that even if you get out, you'll probably spend the rest of your life being tailed by whoever built this place. However, that's not the creepy part here. If you venture further down the hall, a hideously deformed creature wanders out of a room, entering another with a glowing red cross. It only sits there and stares at the symbol.

You might slate the game at this point for featuring a toothless NPC, because it doesn't chase you when you approach it. It simply gawks at the cross and does nothing. However, as you check out the thing's clothes, you realize it's a human... 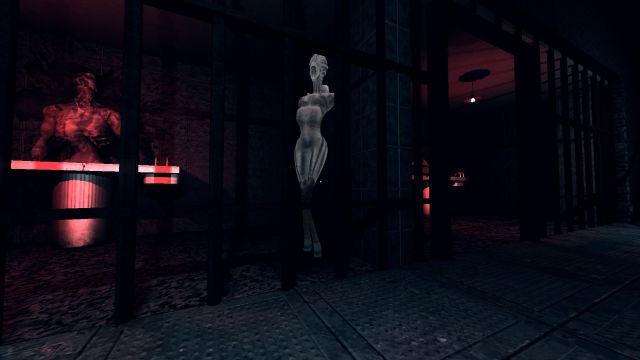 Of the GDNomad games I've played, this one features the most effective use of horror I've encountered, even if it is accidental. These creatures don't chase you as standard enemy characters might. Instead, they act as a warning. "This will be you if you don't escape this facility." You'll be put in a straight jacket, with your face and sanity both slowly deteriorating while the rest of you refuses to die. That's chilling stuff, prompting you to locate an exit on the double.

Sadly, the rest of the game is as disappointing as you'd imagine...

The final stretches of your trip through this research outpost are mostly uneventful. You engage in a couple of simple puzzles that require you to examine diagrams, plus you get chased by monsters a few times. To be honest, though, I jumped pretty good the first time I encountered an actual threat. A slim, armless, alien-like creature--also seen in the game VERGE:Lost chapter--fell from the ceiling and started doing front flips in the air until I died. I tried to reload my game, but it crashed, sending me back to my desktop. Thankfully, this was the only crash I encountered. 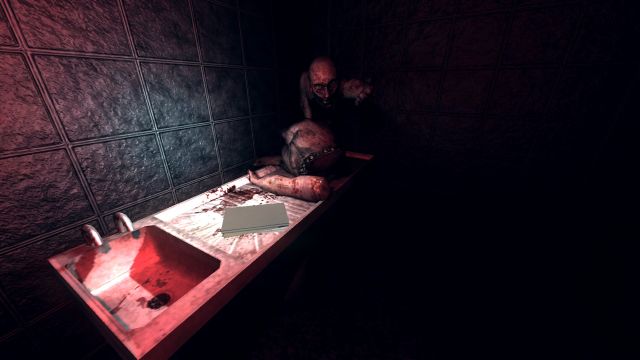 Eventually, I returned to the scene and easily avoided the monster while she asked me if I liked her pretty face. Another foe appeared, but ran past me as I sidestepped him. Really, you can avoid pretty much any adversary that comes at you by just running forward or moving slightly to the side. You don't need stealth, weapons or any fancy tricks; just advance through the campaign as if it were some lousy haunted house attraction in a small town and you're golden.

Before long, you locate the exit and leave, thereby commencing an anticlimactic ending. Total play time: about twenty-five minutes. A brief, poorly written conclusion plays out and you return to the title screen. Autumn Dream may nail one concept, but it's ultimately the same old song and dance from GDNomad/Infernal Dream. Just once, I'd like to play one of their games without hunting for a way to open the front door or engaging in other asinine tasks. Just once...

If you enjoyed this Autumn Dream review, you're encouraged to discuss it with the author and with other members of the site's community. If you don't already have an HonestGamers account, you can sign up for one in a snap. Thank you for reading!

© 1998-2021 HonestGamers
None of the material contained within this site may be reproduced in any conceivable fashion without permission from the author(s) of said material. This site is not sponsored or endorsed by Nintendo, Sega, Sony, Microsoft, or any other such party. Autumn Dream is a registered trademark of its copyright holder. This site makes no claim to Autumn Dream, its characters, screenshots, artwork, music, or any intellectual property contained within. Opinions expressed on this site do not necessarily represent the opinion of site staff or sponsors. Staff and freelance reviews are typically written based on time spent with a retail review copy or review key for the game that is provided by its publisher.