I first saw Uninvited at a Funcoland in one of my many visits. I never paid much attention of what it was supposed to be about other than the box art had some pretty impressive art depicting that awful undead lady responsible for many game overs for many that had played it. Back then I never knew what was it about, or how you would play such a game being that I would play mostly shooters or plat formers at that time. Thanks to emulation I can now test such games and experience how anyone else did whenever they inserted such cartridges into their NES systems. Maybe back then as a kid I could never get the hang of it and would most likely get bored with it, but nowadays these types of games get my interest mostly because Nintendo wanted to emulate PC game play by having such games in their system, something that did not translate well in my opinion, but its pretty curious nonetheless. The game is fashioned after the point and click games in PC, although you use the gamepad to move around the cursor and click on any choice that could help you progress through it. The hints are vague and you must use your sense of logic in order to acquire the right items to advance to the next screen without falling prey to instant deaths. To make things worse, there is a time limit as well, reminding you the more time it takes for you to complete the game, the more the chances that you will be possessed and be lost within the horrific mansion. 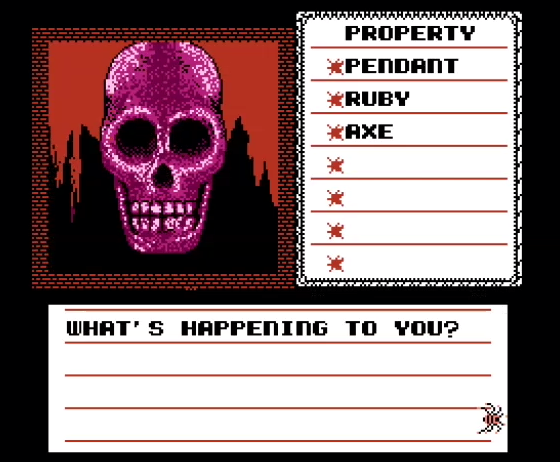 The game starts by your character waking up from a car accident, having only moments to spare before the vehicle blows up. From the very beginning you are tasked into making a move to save yourself before the game ends mere instances after you began playing it, something that many would find irritating and unfair. You then enter the ominous house in front of you in an attempt to rescue your sister whom has disappeared the moment you awoke in side the wreckage. You will explore and find clues to find her without losing your life throughout. While the premise sounds simple, the game is definitely not as such. You must use your wits to work through every other window screen to solve puzzles, avoid danger, and make it safely to the end. Any items you find give away vague hints as to what must be done in order to rescue your sibling and make it out alive. 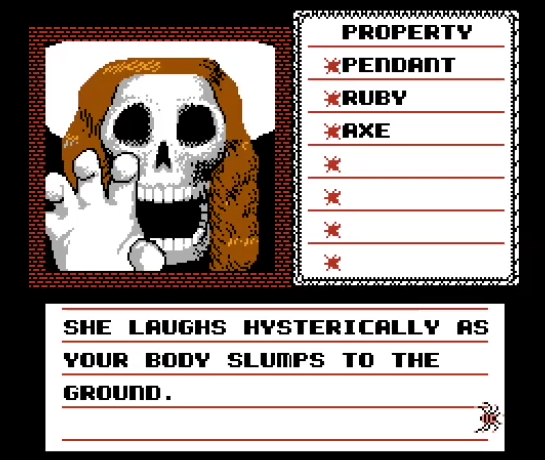 You can interact with about anything within the screen, from the menu to any spot onscreen. Uninvited offers you a chance to freely explore and check every single thing you come across in order to continue your quest. Paying close attention to your surroundings plays an intricate part for your survival. Text, graphics, and its soundtrack all play its part in setting the dark, gloomy atmosphere within this 8-bit game.

Some of the best parts within the game come from the gruesome detail on which it tells how you perish whenever you make a wrong move, which happens quite frequently. Chances are you will die at the same spot over and over until you figure out what items can be used in order to pass through such obstacles. Once you figure the pattern its all a matter of how fast can you go on finishing he game before your character becomes possessed and have to start all over again from the last save point. 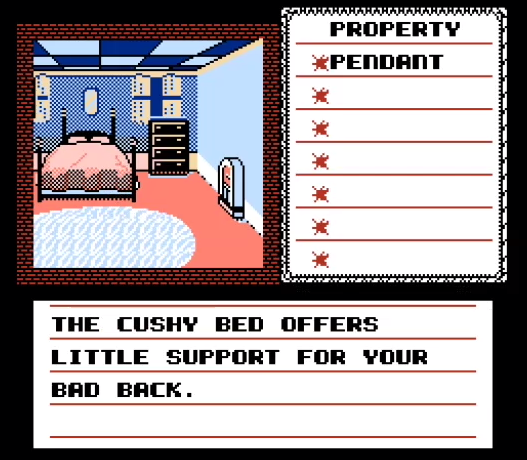 As previously stated, Uninvited is not as common as Super Mario Bros. or any other game where you take the protagonist through levels of plat forming game play, focusing more on tactical thinking and trial and error with risky choices. Patience is a big key into securing a successful play through and even then, you would do best in memorizing what works best in each scenario, if you decide to continue instead of just dropping the entire game for instance. Chances are that a younger demographic would get easily bored and switch to something else than anyone older who would love a challenge with this survival horror themed game.

The question is would you repeat the entire ordeal after going through gaming hell in order to beat it the first time? Well, maybe so, especially when you have knowledge of what to expect and how to deal with it easier and faster than when you first tried it. I would bet that only once is more than enough to get through it in the first place.

If you enjoyed this Uninvited review, you're encouraged to discuss it with the author and with other members of the site's community. If you don't already have an HonestGamers account, you can sign up for one in a snap. Thank you for reading!

© 1998-2021 HonestGamers
None of the material contained within this site may be reproduced in any conceivable fashion without permission from the author(s) of said material. This site is not sponsored or endorsed by Nintendo, Sega, Sony, Microsoft, or any other such party. Uninvited is a registered trademark of its copyright holder. This site makes no claim to Uninvited, its characters, screenshots, artwork, music, or any intellectual property contained within. Opinions expressed on this site do not necessarily represent the opinion of site staff or sponsors. Staff and freelance reviews are typically written based on time spent with a retail review copy or review key for the game that is provided by its publisher.