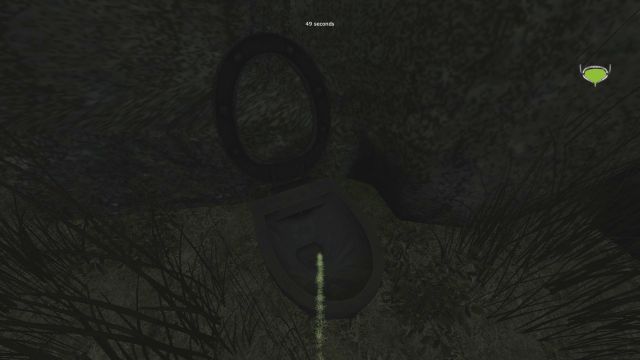 Antihorror begins as many other works of horror have before: with drunkenness. This is no surprise, since alcohol use and abuse is a recurring theme in the genre, usually depicted as an activity favored by the unintelligent, careless or morally wayward (i.e. future victims). However, few tales have taken the concept beyond using it as a means of saying, "Look at these degenerates!" or "This character is going to die later." This game, however, examines binge drinking under a new lens: "What if both the protagonist and the story itself were drunk?"

Here, you take the role of an inebriated bus passenger with a full bladder. You ask the driver to pull over so you can urinate, and he obliges. You stumble into the bushes and find a toilet sitting there in the wilderness. No, not an outhouse or a gas station washroom, but a lonely loo planted in the ground, waiting to collect your golden offering. So you pee, controlling the flow with your mouse and keyboard while keeping an eye out for anything that looks murder-hungry. Yeah, this game has urine mechanics. I never thought I'd type those two words together.

Your driver grows impatient and speeds off. Before you can run back to the road to wave your arms, a convenient rockslide prevents you from going after him. From this point on, you can only head in one direction, and it takes you to an abandoned town. The protagonist then says, "I need to find some notes." Suddenly, we're playing a Slender knockoff, except there won't be any scrawny spirits chasing you down. 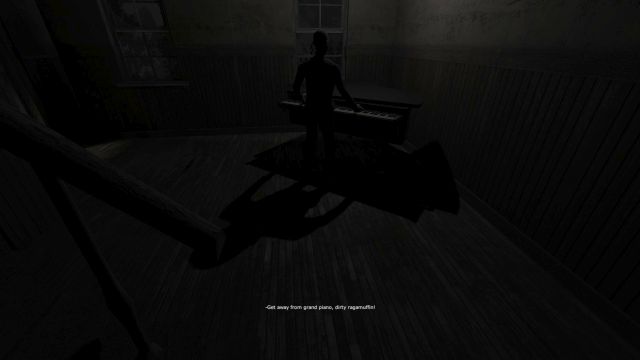 This segment plays out a bit like this: you scour the area for any piece of written material and grab it, then either something "comical" happens or a monster pops up and says something silly. For instance, you nab a note off a barrel of waste, and a turd monster emerges and asks for a dollar. You inspect a sign on a grave and make a comment about some ass being buried there, then a donkey appears and asks you what you were saying about its "culo" (that's another word for ass, by the way). As you can tell, we're dealing with top tier material...

All you've read so far comprises the game's routine. Every moment begins with a build up to a potentially frightening revelation, but culminates in some weak attempt at humor. I guess I can't get mad at these scenes, because the title is Antihorror. However, the moniker seems to imply that that this game seeks to deconstruct the genre, though it doesn't actually do so effectively. Instead, it just annoys you with weirdness.

Believe me, what I described so far doesn't even scratch the surface. At one point, you need to tediously search the town for a tiny key so you can unlock a door. Once you're past that, you encounter the game's most earnest attempt at horror, where you run down a pitch black hallway while some unseen creature noisily chases you. After a mad dash, you reach a door that refuses to budge. The heavy footfalls and snarls grow louder and more deranged until your assailant comes into the light. Surprise! It's a chubby security guard who does nothing to you. 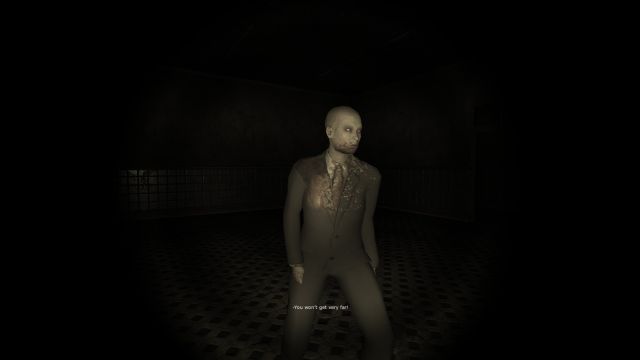 By this point, I reached the realization that I can't stop playing, even though I was frequently greeted by unfunny anticlimaxes. I wanted to see what other oddities Antihorror had in store for me, knowing full well that I would roll my eyes at all of them. At best, I can say this title at least tried in some fashion to implement variety, because each scene's objectives are different. I can't say that about many walking simulators.

Eventually, you approach a couple of really annoying sections that require a little experimentation. One involves chasing a plumber, who is actually just a random dude in a suit running around a bunch of dark corridors. Your goal here is unclear, except that you need to get a key from him. Apparently, the only way to obtain this key is to hit him repeatedly with bricks until he keels over, then have a conversation with him. You learn nothing valuable from this chat, as he yammers on in a high pitched voice about how he crushed his testicles and now sounds like a child. 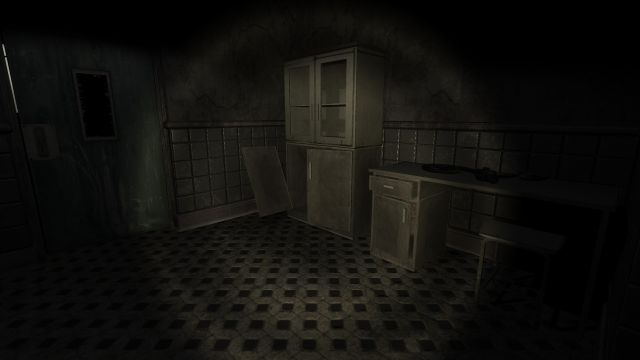 A little after this segment, you guide a plumbing instrument of sorts through some pipes. Spooky imagery pops up now and then, but doesn't prevent you from advancing. For the most part, you wander around, unaware of your goal. Like me, you might end up progressing too far down the pipe, completely overshooting the event item that allows you to activate the campaign's conclusion.

The ending plays out, complete with a possible political statement. It's easy to ignore, though, because it comes off more as the incoherent ramblings of a drunk, and you have to question if the point its making is even serious (pretty likely it isn't). It's the sort of segment that prompts you to say, "I saw this game through for THIS?" Bear in mind that 1) at this point, a shurg-worthy end isn't susprising, and 2) you can complete this game in well under an hour. At worst, you're about a buck or so.

Antihorror then passes out, leaving you to say aloud: "What did I just play?" I don't know if its material consists of a bunch of in-jokes or stuff that only makes sense to certain cultures or what, but the solid fact still remains that the proceedings don't offer anything worth mentioning. I praise it for trying to be different and standing out in a category populated by homogeneous offerings, even though it did so by providing peculiar, cringe-inducing content. Perhaps this title was meant to parody cheap horror games on Steam, but it ended up resembling its target instead.

If you enjoyed this Antihorror review, you're encouraged to discuss it with the author and with other members of the site's community. If you don't already have an HonestGamers account, you can sign up for one in a snap. Thank you for reading!

© 1998-2021 HonestGamers
None of the material contained within this site may be reproduced in any conceivable fashion without permission from the author(s) of said material. This site is not sponsored or endorsed by Nintendo, Sega, Sony, Microsoft, or any other such party. Antihorror is a registered trademark of its copyright holder. This site makes no claim to Antihorror, its characters, screenshots, artwork, music, or any intellectual property contained within. Opinions expressed on this site do not necessarily represent the opinion of site staff or sponsors. Staff and freelance reviews are typically written based on time spent with a retail review copy or review key for the game that is provided by its publisher.