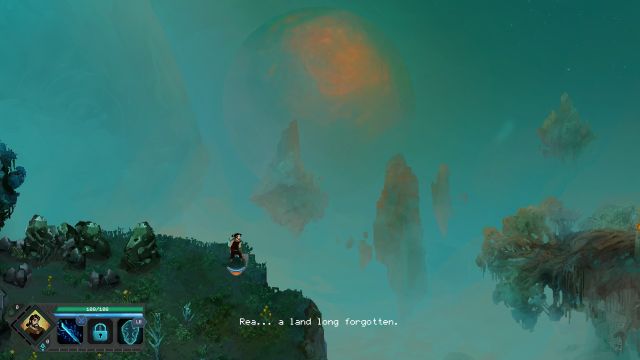 I offer you one piece of advice before playing Children of Morta: stick with it.

Your quest seems daunting early on, mostly because of the dire situation at hand and your lack of resources. You take the role of a family of guardians, the Bergsons, who are sworn to protect the beautiful land of Rea. Horrible corruption has swept the countryside, covering it in a kind of dark matter that transforms wild life into monsters. A mad mountain god named Ou sits at the center of it all, overrunning the Bergsons' home with his minions that push them well beyond their limit.

You retaliate against the depraved deity by venturing into several procedurally generated dungeons and hacking, bashing, slashing or shooting anything that moves. However, you only begin this adventure with two members of the clan usable, and neither of them is quite adequate for the job. John Bergson fills the role of your standard melee combatant, brandishing the classic sword and shield combo. Though his blows pack a punch, his attack speed is a tad slow. Thankfully, his shield helps mitigate damage, though his finite supply of stamina doesn't allow you to hold it up indefinitely. His daughter Linda is an accomplished archer, and thus nails foes from afar, even while walking. However, her damage rating leaves something to be desired.

Using only these two, I struggled to get through the first dungeon, which only consisted of a couple of floors and a boss encounter. I battled agents of the corruption left and right, slew dozens of bats and fought off legions of skeletons for ages, eventually making it to the area boss. Though I gave it my best effort, the enormous spider that guarded the finish line always got the better of me, mostly because I was still wrapping my mind around the mechanics. Yeah, I knew how to side step and block, and I understood how to utilize my characters' special skills and relic-based attacks, but all of that knowledge was to no avail. On top of that, you don't get to stockpile healing items in this one, as you might in other Diablo-like products. In other words, you need to rely partly on skill to win, and that especially means pattern memorization when dealing with bosses. 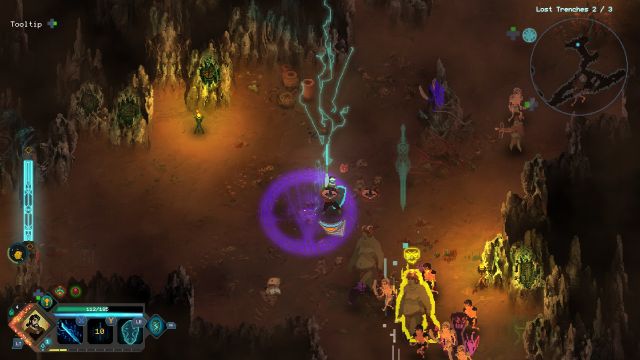 There were also points where I felt hopelessly outnumbered and outdone. Occasionally, I'd fight empowered enemies with glowing auras, which granted them powerful abilities that intensified the already chaotic adventure. For instance, I often ran afoul of red adversaries that periodically summoned meteors, or yellow dudes that created acid pools. On top of that, I sometimes stumbled upon massive armies of enemies that gave me Dungeons of Dredmor flashbacks, sometimes with aura-bearing creatures thrown in for good measure.

It didn't help that some of the stages ran long, too. I sometimes spent an hour journeying to a boss, mainly because I wanted to explore every nook and cranny. While I was thrilled to see such expansive locales, it was no less depressing when I would reach a boss and perish, realizing I would have to spend another lengthy chunk of time going through those floors again.

Every visit to the dungeon ended with my Bergson warping back to the safety for their home. Disappointment mounted with each defeat, though it was always tinged with hope. Each time I returned, a new cutscene played out, either revealing or teasing a new feature that would assist me in my quest. John's brother Ben first revealed himself to be an accomplished blacksmith who permanently upgraded the family's stats in exchange for money I earned in the caves. Thankfully, I didn't lose any currency or experience when I fell in battle, so even a failed run yielded fantastic rewards. Later on, John's mother Margaret also offered permanent upgrades, boosting experience values and improving totems (which bestow temporary advantages) in the dungeons. Some totems bump up stats, while others come with special effects like one that creates explosions and constantly damages nearby enemies. 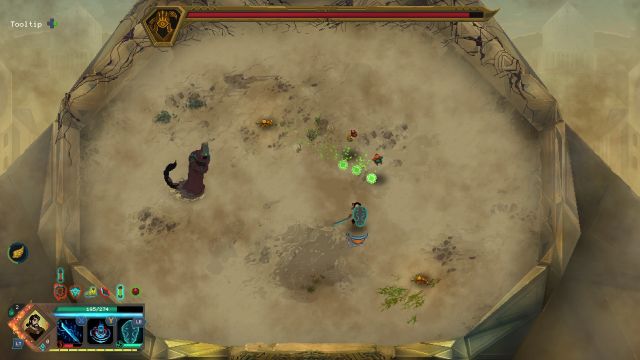 Eventually, other members of the family also joined the cause. Using a dual-wielding rogue named Kevin, I finally laid that spider to rest. Though Kevin wasn't a heavy hitter, his slashes were so fast that his DPS rating was through the roof. With this kid, I earned more money and experience, bolstered my troops and picked choice skills from several skill trees. Every few levels, I'd also earn passive bonuses through those trees that affected the whole family, providing even more incentive to use a different character each time or grind for experience occasionally.

Three more Bergsons added their names to the roster as well. John's younger daughter Lucy brought her ranged pyromancy to the party, and his older son Mark returned home to punch goblins to death. Finally, his humongous nephew Joey also showed up to swing a hammer at things. With each new addition, I saw more potential and became even more engrossed in the experience. At times, I'd enter a previously completed dungeon just so I could level up my new recruits and gain their passive goodies.

That wasn't all, either. Each floor I entered hosted special rooms with exciting side quests, some of which unlocked new features like an in-dungeon shop. There were others, though, that were purely there for dramatic effect, though these were gracious additions and beautiful touches nonetheless. During one scene, I rescued a wolf cub from some beasts that killed its mother. When my character returned it home, it took ill and needed herbs from the cave to survive. I just couldn't bring myself to advance the story without helping that poor thing, so I constantly returned to the stage and refused to beat the next boss until that wolf was well again. 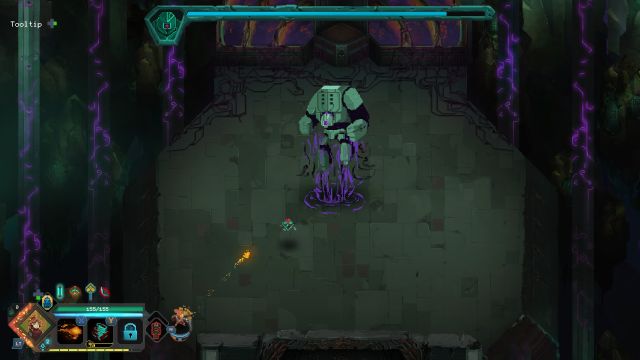 Morta's storytelling is fantastic, though I suspect it will grate on some nerves because it eschews traditional dialogue in favor of a narrator. Personally, I enjoyed the storybook-like touch the narrator brought to the experience. No, you don't get to hear John's gruff voice or Kevin's squeaky, adolescent complaints, but I still felt invested in these characters and their struggle against Ou, especially with some of the grim twists the plot takes.

Stick with it, I'd tell myself every so often. I did so, and I watched the Bergsons grow into a forced to be reckoned with. I watched as bosses fell and I powered my way through dungeon after dungeon. I stuck with it and saw the human interactions between Bergsons: John and Kevin playing catch, Margaret training Lucy to use her magical powers responsibly, a friendly rivalry between Mark and Joey... It was tough not to appreciate these folks, because you got to see them as ordinary people and not just heroes on a mission.

Children of Morta doesn't give you everything you might want from the get-go. It drip feeds you content, only allowing you to become progressively more powerful over time, thereby creating a balanced adventure in the process. Yeah, the start is a little bumpy, and you'll encounter a few small leaps in difficulty rating, but if you stick with it, you'll find yourself overcoming those hurdles and watching both the family and the offered content grow. Believe me, it's worth it.
4/5

If you enjoyed this Children of Morta review, you're encouraged to discuss it with the author and with other members of the site's community. If you don't already have an HonestGamers account, you can sign up for one in a snap. Thank you for reading!

© 1998-2020 HonestGamers
None of the material contained within this site may be reproduced in any conceivable fashion without permission from the author(s) of said material. This site is not sponsored or endorsed by Nintendo, Sega, Sony, Microsoft, or any other such party. Children of Morta is a registered trademark of its copyright holder. This site makes no claim to Children of Morta, its characters, screenshots, artwork, music, or any intellectual property contained within. Opinions expressed on this site do not necessarily represent the opinion of site staff or sponsors. Staff and freelance reviews are typically written based on time spent with a retail review copy or review key for the game that is provided by its publisher.