Almost anyone my age who has loved Nintendo's games for as long as I have has a Donkey Kong story to tell, if not several. None of mine are particularly interesting, so I won't share them here. The point is that it's a game people know. But do they? Do they really?

My experience with Donkey Kong, aside from youthful flirtations with a cocktail cabinet at the local video rental store (remember when those were a thing?), has been limited to the NES edition included within Donkey Kong Classics, or various digital conversions of said port on hardware like the Wii and Wii U. I sure do miss the Virtual Console (remember when that was a thing?). I could stomp all over the NES version in any form, because here's a secret: the developers made it easier. 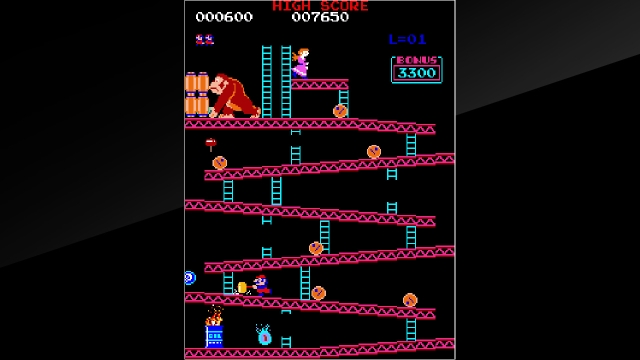 In arcades, Donkey Kong was meant to suck quarters. This it did admirably. Players routinely wouldn't get past even the first level. You know, the one that results when the eponymous gorilla kidnaps the beautiful Pauline and drags her up several ladders, then stomps off to the left and girders fall into sloping positions that keep barrels rolling whenever someone feels the urge to chuck them at the carpenter who is rushing to rescue his girlfriend. Donkey Kong feels that precise urge quite frequently, but he's a little kinder about it on the NES because someone figured you will have already spent $60 to play and they might as well let you have a good time.

As the carpenter (who I shall now call Mario even though most of us know his name was originally "Jumpman"), players run along the girders, jumping rolling barrels and ascending ladders to reach the highest area. They can grab hammers to obliterate a few of the barrels, which is satisfying and leads to score increases, but mostly the right idea is to madly rush to the damsel in distress. 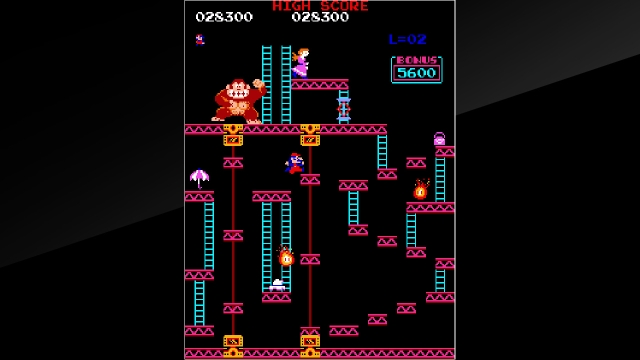 Then you access the second level, where the obstacles you encounter depend on which version of the game you're playing. On the NES, you would find a series of high platforms and elevators, where an endless supply of bouncing springs spew forth from the top left side of the screen. Mario's goal is to cross a few precarious ledges, climb up to the higher level and then make a mad dash under those springs so that (if his timing is right) he can climb one more short ladder to Pauline.

In the original Japanese version of the game, the second level is quite different and (in my estimation) a bit easier. You start on the bottom level of a pie factory. There are conveyor belts that send pies along, which you can jump for easy points. Sometimes, the belts change direction suddenly, which makes negotiating the pastry menace a bit dangerous. And there are ladders on multiple levels, which are those two-part dealies that sometimes fold down just when you're all set to climb them. So it's a lot to keep in mind at once, but not especially overwhelming. Even with no prior experience, I cleared the level on my first attempt without incident. 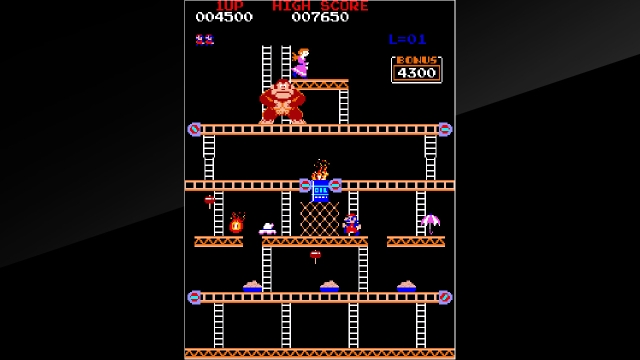 But you don't need a blow-by-blow description of every level. They're thematically consistent, and you're either familiar with them or you can let them surprise you for the first time as they once did most of a generation of gamers. Just know that if you're counting on time spent in the NES trenches to save you, a little recalculation is in order; barrels and springs seem to come faster, and the roaming flames in the final level before you rescue Pauline are downright vicious. You really need to have--and execute--a solid plan of action if you want to start cycling through those same few levels all over again as your score continues to climb and you feel like Billy Mitchell with an emulator.

In the Arcade Archives edition of the game, besides the extra difficulty and a stage you may never have previously experienced, you will find the usual enhancements that bring a bit of replay value and competition to the proceedings. Any time you manage to attain a great score in any typical mode, you can post it online for all to wonder at your brilliance. This is nice, though if you're playing on default settings, it's possible people are save spamming to get better scores than yours. 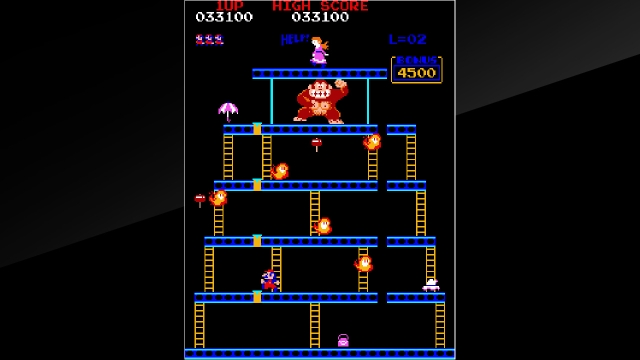 In "High Score" mode, even pausing the game ends your run and thus prevents that possibility. In "Caravan" mode, the same is true and there's also the limitation of a 5-minute timer. You only get as many points as you can rack up within that time, and so you have to make choices about how best to budget your time. Do you get points by completing stages in a mad dash, only to lose precious seconds while animations play? Or do you let barrels or ghosts put you in a dangerous place before you go nuts with the hammer? The choice is yours!

Arcade Archives: Donkey Kong is all the proof I need that I'm not nearly as decent at Donkey Kong as the old NES port led me to believe. It's also a great way to revisit a classic game and play three versions of it: a hard one, a harder one and a shorter one that includes only half the levels within each stage. Maybe none of that stuff will be enough to delight the current generation of gamers, which has thousands of shiny new options when it comes to spending time and money, but it's a sufficiently entertaining treat for someone like me who already had boring stories to tell you about a classic game and now has a few more.
3.5/5

If you enjoyed this Arcade Archives: Donkey Kong review, you're encouraged to discuss it with the author and with other members of the site's community. If you don't already have an HonestGamers account, you can sign up for one in a snap. Thank you for reading!

© 1998-2020 HonestGamers
None of the material contained within this site may be reproduced in any conceivable fashion without permission from the author(s) of said material. This site is not sponsored or endorsed by Nintendo, Sega, Sony, Microsoft, or any other such party. Arcade Archives: Donkey Kong is a registered trademark of its copyright holder. This site makes no claim to Arcade Archives: Donkey Kong, its characters, screenshots, artwork, music, or any intellectual property contained within. Opinions expressed on this site do not necessarily represent the opinion of site staff or sponsors. Staff and freelance reviews are typically written based on time spent with a retail review copy or review key for the game that is provided by its publisher.