Heroes come in many forms, such as a gallant, towering knight with a shovel, an elf archer with impeccable marksmanship, or even a robed mage that can summon many a devastating spell. However, in the elegantly-named Bouncing Hero, the protagonist, donning a helmet of the horned variety, has an "interesting" accessory. Your knight rides... a pogostick, shaped like a horse, and it automatically bounces nonstop in this 2D, sprite-based platformer. Does this hero vanquish evil with said means of transportation? For the sake of a kingdom and its citizens? Well, the game doesn't have an actual plot, so let's just go with: maybe?

As you guide this knight through 13 stages of Witch Castle, you'll traverse numerous brick-walled rooms and corridors filled with hazards, featuring conveniently-placed spikes, wall turrets, and even electrical currents. Getting through these obstacles in condensed hallways is tricky in itself, but if you even want to escape, you also have to hit glowing switches scattered around each area to unlock the exit. However, in the upper left corner of the screen is a health meter where you can take three hits, and on top of that, hitting specific-colored switches can slowly refill one of those lost hearts over time. If you don't get hit again in that span, that is. Not so tense now, right? Well, there's a catch: health loss carries over to all rooms in each stage, including the boss room. If you die, even during the boss battle, you'll be sent back to the first room of said stage. 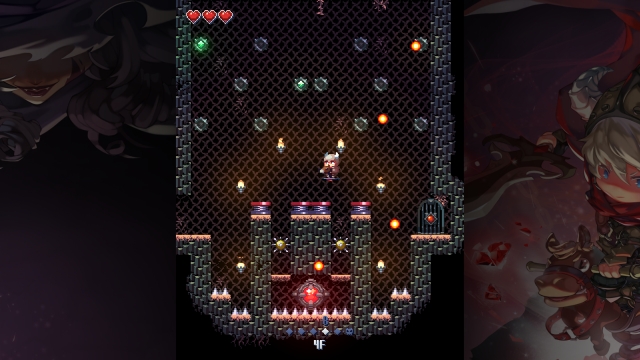 Now, the whole bouncing concept is an obvious gimmick, one that can easily run its course real fast, especially with the aforementioned stakes, causing a potential domino effect of frustration and repetition. Doesn't help that its layouts aren't all too visually varied; even when the backdrops slightly change, they all look very similar due to their dark color palette. However, in spite of its lackluster graphical presentation, Bouncing Hero is far from a generic, disappointing title. If there's one thing you should take away from this game, it's that the devs did a really good job ensuring obstacles and the overall room designs function well with the core bounce mechanic.

The game begins as a tutorial of sorts, of course, where you're getting used to bouncing, flipping switches, and easily dodging slow, four-way projectile attacks, even as its pattern changes trajectory. Soon, though, this product starts expecting more of your platforming prowess. One room, for example, is spacious, wide, and filled top to bottom with switches. You can't reach the top ones normally, so you have to get on three floating, moving platforms, vertically-adjacent to one another, to hit them. Also, in the bottom center of the room... is a crystal that's attacking relentlessly with a spread shot. Basically: you must navigate between two moving platforms, successfully touch every switch, and avoid a spread shot attack on three lives or less... while also dealing with an uncontrollable bounce.

You succeeded? Great. Now deal with one, two, or more rooms of similar hand-eye coordination precision, one of which is a boss battle, with your remaining lifespan. 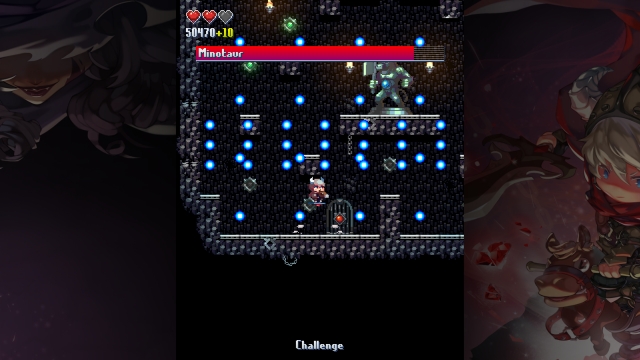 You'll encounter rooms where you must outrun a rising spike pit while moving past turrets, floating spikes, and whatnot in cramped passageways, and if you don't get the bounce rhythm down right, say goodbye to a fighting chance at the boss. You'll encounter flooded rooms where the water changes the speed of your hop, and to make matters more challenging, sometimes you'll have to hop in and out of the water, completely messing with your rhythm. You'll even encounter rooms where it feels like you're constantly dodging projectiles with a bullet hell mentality. Then there's the boss rooms, which are usually the most intense moments in the game due to the stakes at hand; one mistake can restart the entire stage. They have proper, tense attack patterns, spray bullets everywhere, and even set traps. The game is definitely a gauntlet of platforming ideas, that's for sure.

Though, Bouncing Hero could have greatly benefited from having an additional mode, perhaps multiplayer, to curb its lack of replay value; once you're finished with the game, there's not much in terms of extras outside a boss rush mode and a few extra stages. At the very least, there's a harder difficulty that forces you to complete each stage on a lone life if you're a masochist. However, that minor issue doesn't take away from the fact that Bouncing Hero embodies the spirit of good platform structure, providing thoughtful designs with oft-used ideas, and still manages to make them both entertaining and challenging for players. If anything, don't play Bouncing Hero because you're enamored by its goofy concept, play it because you want to experience a simple, yet very craftily-made platformer.
3.5/5

If you enjoyed this Bouncing Hero review, you're encouraged to discuss it with the author and with other members of the site's community. If you don't already have an HonestGamers account, you can sign up for one in a snap. Thank you for reading!

© 1998-2020 HonestGamers
None of the material contained within this site may be reproduced in any conceivable fashion without permission from the author(s) of said material. This site is not sponsored or endorsed by Nintendo, Sega, Sony, Microsoft, or any other such party. Bouncing Hero is a registered trademark of its copyright holder. This site makes no claim to Bouncing Hero, its characters, screenshots, artwork, music, or any intellectual property contained within. Opinions expressed on this site do not necessarily represent the opinion of site staff or sponsors. Staff and freelance reviews are typically written based on time spent with a retail review copy or review key for the game that is provided by its publisher.