Theres a voice in my head that tells me to do things. This isnt going to come as a surprise to some of you, and, to those less acquainted with me, it may bring forth an avalanche of red flags, but Ive crossed that line, so may as well forge on. These voices are cruel, demanding I undertake unusual sadistic measures but -- and this is a but of note -- they only reach full volume during 4X games. Put me in front of a space empire builder, and Ill turn the galaxy to glass. I know I will, though Ive often tried not to. Ive been expelled from every Sins of the Solar System multiplayer group Ive ever tried to maintain; Ive taken innocent browser-based space exploration like Neptunes Pride as used it as an excuse to grind those who trusted me the most underheel. I took to Armada 2526, and obsessively sank uncountable hours into destroying a simian-like alien race who mildly besmirched me. I did the same in Horizon to an aqautic species because I didnt like their stupid fishy faces. And, god, how hard I tried to be the nice guy in Star Ruler 2. I did everything right, I stuffed the hateful little voice right to the back of my mind. But it found dark justifications and got out anyway. Then the galaxy burnt beneath my gaze.

To the games credit, the ability to give in to bloodlust without several hours of careful planning is non existent. Hell, the ability to do much of anything will take several dozens turns as you try to carefully cultivate your fledgling homeworld into something even passingly able to sustain a galaxy-wide empire. As things starts, you dont even have the correct technological knowhow to construct a colony ship in anything resembling a timely manner, so building a fleet of warships goes right out the window. In a fashion that harks back to the much adored Master of Orion 2;initially at least, its much less concerned with having you colonise and spread throughout the universe as it is about strengthening what planets you have, bookmarking them as future trade powerhouses or industrial superplanets. Then starting the long, long process into realising that goal.

You dont begin with much. You are the proud owner of one core world, a handful of rudimentary spacecraft and a dauntingly open galaxy map. For the most part, you have the time and space to start building yourself up, but you have to do so in baby steps. For example, if you tried to build a colony ship right off the bat, youd find yourself having to wait over 100 turns for your factories to eventually wheeze out a single craft. You dont have the technology yet to mass produce them, so maybe work on that first. You can start with smaller projects aimed to improve your output; instead, why not build an outpost craft and send it to that nearby gas giant to harvest helium? Or send it into an asteroid belt to start a mining operation? 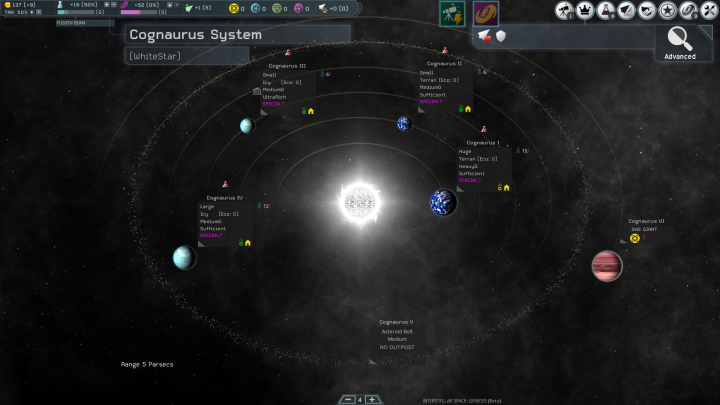 But youd be luckier than I if these things are just dropped on your lap. To begin with, you only have your most local solar system to explore and will have to plough time into exploring new systems in order to locate these new resources. You can do this by mobilising your tiny fleet at the risk of them being destroyed by an unforeseen danger, or you can utilise your scanning ability to look learn about them from afar. Scanning is by far the safest option to mapping out prospective new planets and resources, but its also a significant time sink.

Theres ways around it. You can select a number or perks as your empire grows, including one that will either let you scan two areas at once, or increase your scan range significantly. Only, you can only pick one, and the other becomes lost forever once your selection is made. Effectively, it the choice between short term gain -- being able to map out the nearest systems significantly quicker, or being able to see further into the void and prolonging the usefulness of scan technology -- that you have to choose between. This is common enough in the perks package; some perks will grant you ships and equipment well beyond your initial means to produce, which will always look tempting, but means you banish often helpful empire-wide boosts upon selection.

I was all about the short term gain. I wanted that leg up, especially at a time before I had pesky alien races to contend with. So I grabbed up perks that let me have a colony ship way earlier than I could build them, doubled my scanning speed, and absolutely grabbed the perk that let me look at two systems at once. Soon, I was mapping out all the best nearby planets for myself, establishing a colony I could barely support and mining the hell out of resources Id snatched up before anyone else could find them. It wasnt plain sailing; I found myself hiking up taxes to cover some of the costs that came before Id earnt the means to cover them, but it gave me the step up I needed to start the slow grind toward industrial megapower. I used my bonus colony ship to steal a suitable nearby planet, which was slowly developed with a heavy focus on ship building in mind. 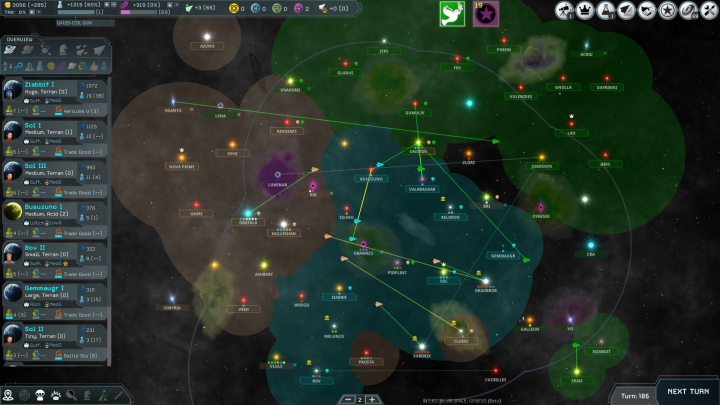 It took some selective research, but the strategy started to pay off. Genesis research tree is a behemoth, letting you invest in anything from propulsion systems, armoury and weaponry, terraforming capabilities and the like. It was my goal to kickstart production, so all that jazz was more or less ignored. It took no small amount of grind but, by the time I met my first alien race, my port planet had been equipped with a sky elevator, a space station and a military academy. I was able to manufacture colony and outpost ships at whim. Soon, I was able to do more than set up occasional colonies on any suitable planet I stumbled across; I had population to spare. I started inhabiting desert and swamp planets simply because I could. I could terraform them later when i got around to putting effort into the particular branch of research. I had some aliens to size up first.

The Nova came first; a nomadic tribe with a preference for desert planets, and we got on pretty well. We were establishing trade routes and swapping tech by the time Id made contact with the Draguul, a jittery insect-like race. But they seemed pretty chill, too; a non-aggression pact followed and we stayed out of each others way when we could. Then came the Moltar, sentient rock creatures who live among live volcanoes. They were a whiny, pushy bunch, but existed on the outer reaches of the galaxy on worlds nothing else could inhabit. Aside from having to constantly tell them that they couldnt mine within my empire and endure their sulky retorts over and over, our interactions were limited. There wasnt a lot of threats out there. The Voice remained silent.

At this point, I had both a thriving homeworld and a highly successful shipyard planet, which was at the point where it could supply colony ships in about a dozen turns rather than a hundred. For a while, the research focus turned to terraforming projects, so that I could colonize less hospitable planets and then slowly turn them into something more ideal. Numerous mining outposts where established, now often in unclaimed space laying between myself and another empire. Trying to stake claims before anyone else because a thing, which was fine with me; I had everything I needed to pump out a steady supply of support crafts now. I took all the asteroid belts I could reach; I claimed all the gas giants I saw. Once stability was reached, then I could start looking at building all the big, chunky warships I secretly craved. 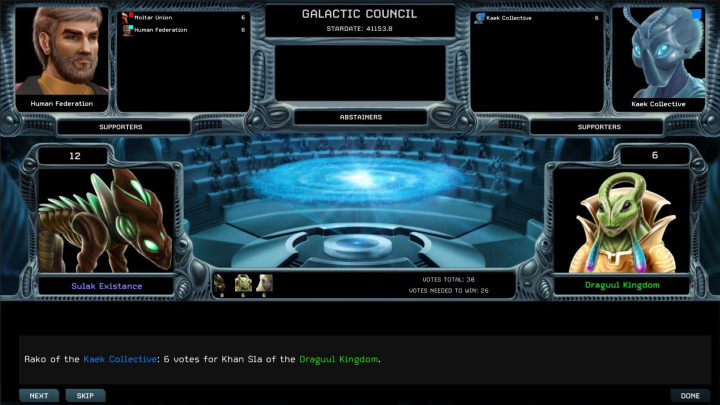 Though you can turn it off before the onset, once all the races have established contact, a galactic council of sorts is formed where everyone gets together and votes on who they might elect as the head of the council. The head, more or less, becomes president of everything,and the game is won. The two most powerful states are automatically elected to run, and I was within that bracket. Hell, I was the most power state. And, seemingly, the most well liked, because I won. I was king of the !@#$! universe, and I didnt even have to fire a single laser volley. So, thank you, Interstellar Space: Genesis; your pacifist conclusion has finally broke the streak of tyranny. The universe was united under me, everyone was happy. And everyone was alive.

I mean, yeah, youve won the game and all, and thats very commendable. Head of the council? Very fancy. All very well deserved, Im sure. But if I can draw your attention to that little button over there? The one next to Complete the game? Im pretty sure it gives you the option to continue

There was such a button. It did provide that option.

Technically, it said, technically, youve beaten the game under your own terms, so anything you do after the fact is just sandboxing, right? I mean, its not like youre playing this game just for kicks, anyway. Youre supposed to be a critic; what if the combat sucks? Thats worthy of note. Hey, it probably wont -- its all turn-based and hit percentages and that nonsense. Its practically X-COM, and you love that shit.

And that was true, I did.

So it was for all the right reasons that I hit that continue key and switched all my research from terraforming projects to weapons of mass destruction. Nuclear missiles, hardier laser, heat banks and bomber pods. The production of ships designed to better the lot of my people ceased; I already had everything in place that Id need to churn out destroyers and titans. The games ability to hire leaders to place in charge of systems had been taken advantage of throughout the game, but now I hired unique ship captain and had them command my biggest and best. It was around that time when the Moltar declared war on the Nova.

Some would call it impossible to turn a volcano-based civilization to ash. I found a way.
3.5/5

If you enjoyed this Interstellar Space: Genesis review, you're encouraged to discuss it with the author and with other members of the site's community. If you don't already have an HonestGamers account, you can sign up for one in a snap. Thank you for reading!

© 1998-2020 HonestGamers
None of the material contained within this site may be reproduced in any conceivable fashion without permission from the author(s) of said material. This site is not sponsored or endorsed by Nintendo, Sega, Sony, Microsoft, or any other such party. Interstellar Space: Genesis is a registered trademark of its copyright holder. This site makes no claim to Interstellar Space: Genesis, its characters, screenshots, artwork, music, or any intellectual property contained within. Opinions expressed on this site do not necessarily represent the opinion of site staff or sponsors. Staff and freelance reviews are typically written based on time spent with a retail review copy or review key for the game that is provided by its publisher.