I was a kid when I first noticed SEGA's D.D. Crew all by its lonesome in a corner inside one of the many Arcades I used to hang out. Not many bothered to play the game when it was introduced there. I didnt' play it either and would just stare as some tried it out, checking how BIZARRE it was in terms of dealing with enemies while players mashed the buttons trying to knock anyone out, yet the best they could do is make enemies tired and then backhand their character until they dropped dead. After that the game itself was just forgotten until it was replaced by a Capcom's King of Dragons cabinet. Much later I came to understand just why this game was avoidable and quite frankly cannot blame ANYONE who has tried it out in just forgetting about it. 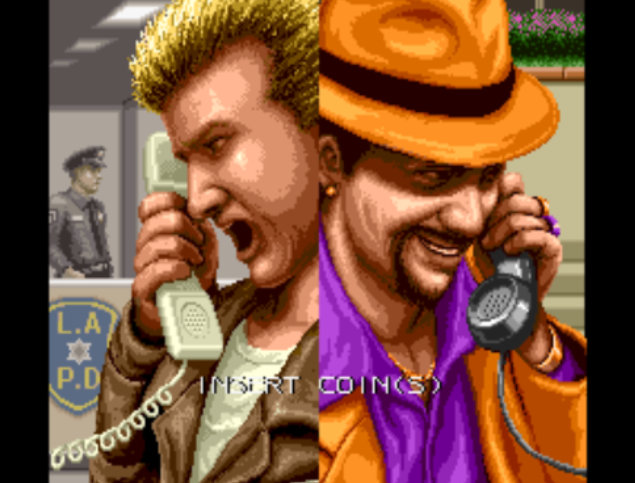 The intro is quite interesting to watch. A police officer answers a phone call inside his precinct and some no good goon tells him there is a bomb about to set off in a nearby amusement park. Moments later a huge explosion is shown and the title screen comes out. Intriguing. Makes you want to try the game right away. Then you start regretting the choice on playing it sadly enough. Amusingly, the whole bomb threat simply goes up in smoke once the game begins and is never brought back again, even when the first stage IS in said amusement park. Confusing. 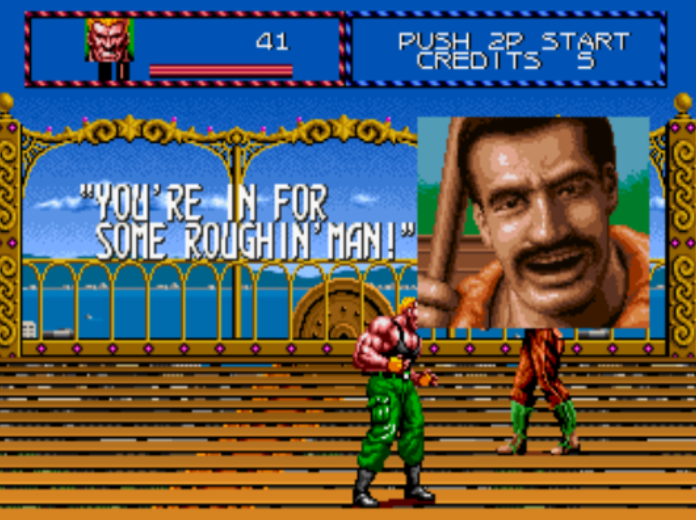 Bosses have the most whacky of lines.

You have your choice of four bad dudes, each with their own style of fighting. It matters little who you choose being they all pretty have the same set of moves displayed in a variety of poses. A boxer gives mostly uppercuts while the kung-fu master relies on kicks. Although you can beat up any other enemy on the screen they don't go down easily. You must input the correct way of delivering your attacks otherwise the enemy will take advantage on countering you and knocking you off. Enemies also have a nasty tendency in ganging up on you and you can only deal with ONE enemy at a time no matter how many are in front of you, which makes it pretty much a nightmare to advance. Characters do not have a special "master move" to speak of to knock away enemies either, and their jumping skills lack pretty much. If you want to deliver a flying kick you must first dash to gain momentum and go for it. All of this does not help in the least in gameplay. 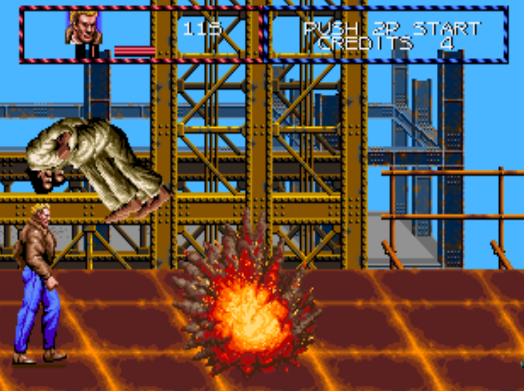 You can argue that D.D. Crew relies on realism more than anything else and there isn't a more realistic truth than you dying with a few good punches when surrounded by jerks. Then again enemies survive a freakin' live grenade when you toss it at them and still have enough life in them to take an unrealistic number of punches and kicks before falling to their demise. This isn't realism. This is bias masochism. For those who can pass the first stage of the game I applaud you in a sincere manner. Ironically enough, the boss fights are much easier than most thugs you face before you get to such. Most of the time you just corner them and tap away at the attack button until they drop dead or just jump kick at them before they give up. This game is so unbalanced in a number of ways it's not even amusing.

One amusing aspect though is its laughable soundtrack. You are treated with streetwise talk and music throughout the game which tries hard as heck to make itself taken seriously throughout. This combined with the weird attire everyone is dressed on makes it seem like watching an interactive 70s crime movie overall. I will give props for how well detailed characters are in here, even though they are mostly generic in appearance. Stages are broad and also a feast for your eyes in said detail, but besides this D.D. Crew simply does not deliver much on what it counts: fun. 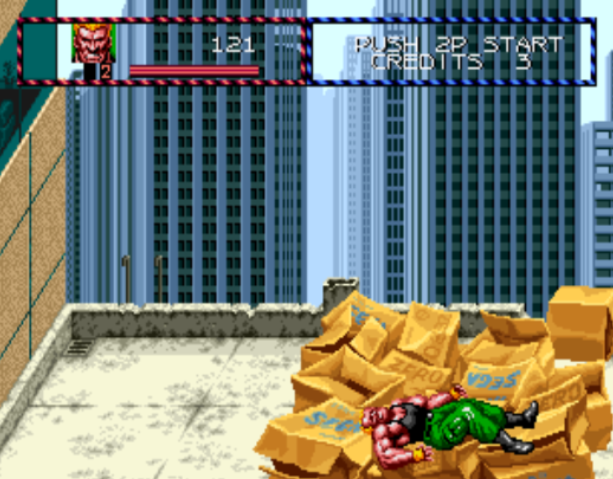 On this delightful section you must make sure to land on these boxes or lose a life. Wonderful.

Its such a bizarre subject the fact that you are forced to LEARN a pattern on how to take on generic enemies instead of just pummel away and move on to the next stage as with most brawlers of its time. Scratch that, its TIRESOME and ANNOYING. SEGA no doubt wanted to bring some sort of realistic approach to the genre and I will not blame them for trying, but this is one game which they should had given a lot more thought than just making it look gritty and hope for the best. If a game forces you to learn such a gimmick in how to play it then you might just go back to titles that make said genre fun to play such as Final Fight or Streets of Rage. D.D. Crew is just here for show and little else.
2/5

If you enjoyed this D.D. Crew review, you're encouraged to discuss it with the author and with other members of the site's community. If you don't already have an HonestGamers account, you can sign up for one in a snap. Thank you for reading!

© 1998-2020 HonestGamers
None of the material contained within this site may be reproduced in any conceivable fashion without permission from the author(s) of said material. This site is not sponsored or endorsed by Nintendo, Sega, Sony, Microsoft, or any other such party. D.D. Crew is a registered trademark of its copyright holder. This site makes no claim to D.D. Crew, its characters, screenshots, artwork, music, or any intellectual property contained within. Opinions expressed on this site do not necessarily represent the opinion of site staff or sponsors. Staff and freelance reviews are typically written based on time spent with a retail review copy or review key for the game that is provided by its publisher.