Games in the Zelda franchise tend to be good enough that probably no one would blame you if you were to play through all of the ones everyone knows about and then find yourself thinking "Boy, I wish there were another Zelda game I could enjoy for the first time." And maybe there even is, without counting the Phillips CD-i stuff that everyone knows better than to mention except derisively. I'm talking about Cadence of Hyrule: Crypt of the NecroDancer Featuring The Legend of Zelda on the Nintendo Switch. Sometimes, even games with absurdly complicated titles wind up being very good.

The "Featuring" part of the title suggested to me, even after I watched the video where the game was originally revealed, that Link, Zelda and the others would mostly play a supporting role in a game that maybe was just a clever re-skin of the indie hit, Crypt of the NecroDancer. But it turns out this project, developed by the team at Brace Yourself Games, goes much further with the homage than its name suggests. After spending most of 10 hours playing it (and collecting everything except for--I presume--some flippers and a bottle and two final pieces of heart), I am happy to say it is better than I ever dared hope. 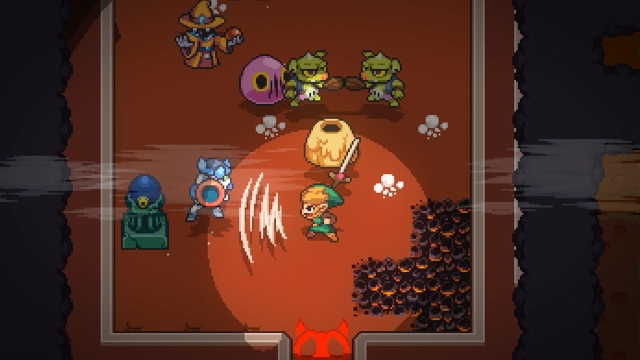 Cadence of Hyrule begins as you drop into a strange land, which turns out to be Hyrule. The local legends--Link and Zelda--have been cast into a deep sleep, and so it falls to you to almost immediately awaken one of them and eventually the other, as part of a tour that finds you gathering four mystical instruments so you can pass through a barrier outside Hyrule Castle and take on a new villain: a character named Cadence. She has reasons for wreaking havoc, but to find out what those are, you'll have to endure--make that enjoy--an epic quest that finds you squaring off against all sorts of familiar villains (and a few new ones) while dancing to a rhythm that forces you to change how you wander the land.

After the game loads and you start going through the opening process, you'll have to mess with calibration menus that determine how much delay there typically is between the moment you hear a beat or see a visual prompt on-screen and press a button. The idea is that taking this step will account for differences in televisions and maybe reflexes. The mere existence of those menus led me to fear that the game would be excessively strict about timing (I remembered my recent, disastrous attempt to play Um Jammer Lammy on my PS3), which would have been less than ideal. Sure, you can modify the timing later if you mess up at the beginning, but still I had... fears. Fortunately, they proved unfounded. I was able to go through the game from start to finish, with rhythm mechanics completely in place (you can also disable some of them, if they cramp your style too much). After a brief period of adjustment, I never really had issues at all. 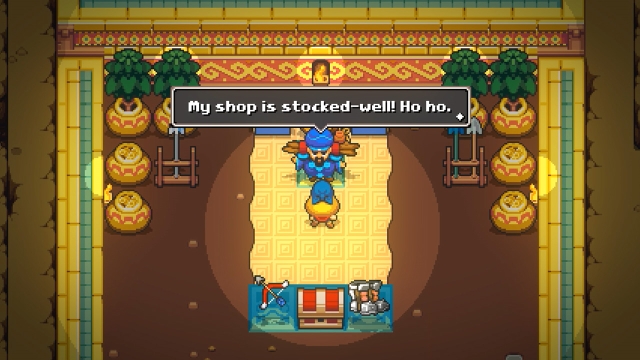 The world map is divided into play spaces, kind of like areas in The Legend of Zelda: A Link to the Past. Those spaces function as grids, where one hop in any direction or a swing of your weapon uses up a turn. It's a bit like a roguelike dungeon crawler, with the difference being that the timer never stops. Turns keep passing even if you're not an active participant. Enemies make moves in time with a beat, which means that even if you remain stationary, action unfolds. Sometimes, you want to stand where you are and let enemies come to you. Sometimes, you can dodge through dangerous gauntlets because your foes swing or hop only when the background compositions insist. When all of that comes together, it's beautiful. When you fail to hit a beat, you might fail to fire an arrow from your bow or your sword strike could do less damage. Typically, the difficulty curve is sufficiently gentle that none of those mishaps will do more than maybe embarrass you a little bit. To a surprising degree, the game can be played as if it is a standard Zelda title.

What allows Cadence of Hyrule to so closely mimic a conventional Zelda title is the world you explore. The atmosphere feels a bit mysterious, smartly mixing various elements from past Zelda games to produce an almost dream-like state that perhaps most closely resembles (right down to the use of instruments) The Legend of Zelda: Link's Awakening. You start by acquiring a sword and shield, and you can upgrade those items and find others to supplement them, which in turn can be enhanced during visits to one of several fairy ponds. You later obtain bottles and magical rods, boomerangs and bombchus as your inventory swells. 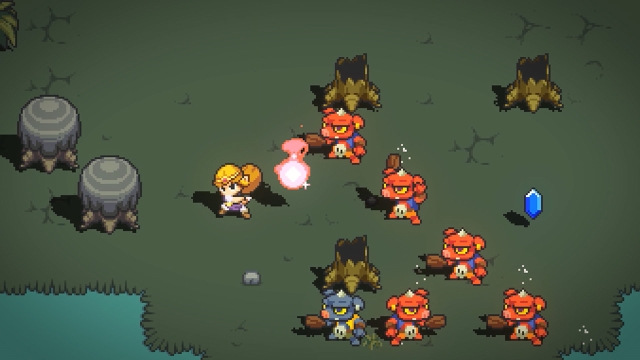 As you might expect, prior exposure to the franchise goes a long way. Though far from mandatory, that familiarity lets you appreciate some of the subtler humor, such as the rather amusing boss names, and it lets you know what attacks to expect from enemies like wizzrobes and floating orbs that periodically send sparks coursing along their surface. Either the people at Brace Yourself Games are Zelda nerds of the highest order, or Nintendo itself consulted extensively to ensure that everything felt right. Whatever the case, the end result qualifies as a success.

I noted above that the difficulty is such that you can progress quickly even if you're not great at the rhythm, but don't expect a walk in the park. At times, the whole affair is surprisingly unforgiving. If you fall in battle and don't have potions remaining or fairies in your bottles (in this game, the former is the more useful of the two), you'll lose any temporary items in your inventory, along with your stash of rupees. The latter penalty strikes me as excessive, since you can carry thousands of rupees and lose all of them because you stumbled--er, danced--across an efficient mob. A little preparation goes a long way toward preventing that from coming up all that often, however. The world map is also quite large, with some hostile pockets and fairly demanding puzzles that required a lot more attention than I anticipated. 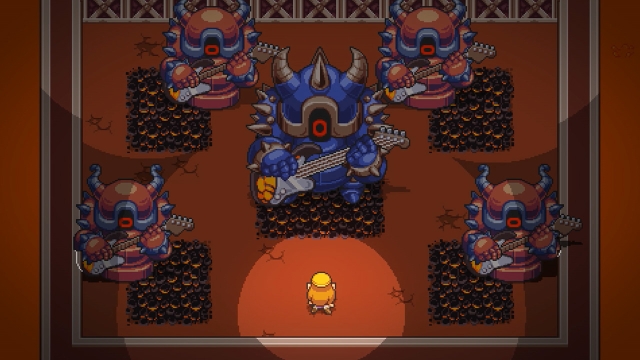 Temporary items, which are numerous, feel like a nod to Breath of the Wild, because you can find swords and shovels and torches and the like that degrade and eventually break following repeated use. In the overworld, but especially in a few dungeon environments, you'll need to do a lot of digging to find hidden treasures. They often are just torches or more shovels but sometimes can be considerably more important. In rare cases, this setup leaves you unable to snag the best rewards unless you return with a shovel or use your limited supply of bombs or push boulders against sandy walls, but honestly, I never had any serious issues. The mechanic wound up being interesting rather than frustrating, in part because of a map system that makes it easy to keep track of areas where treasure remains unclaimed.

One final thing worth mentioning is the variety of player characters. By the time you reach the end of the campaign, you should have your choice of three heroes, each possessing a few unique abilities. You can change between them at sheikh stones that dot the landscape, or even play with a friend in a two-player mode.

I'm not always a huge fan of rhythm games, but I was determined to try Cadence of Hyrule: Crypt of the NecroDancer Featuring The Legend of Zelda because it looked like it would borrow light elements from a franchise I love. Imagine my surprise when what I found instead of a mildly interesting mishmash was one of the most purely enjoyable Zelda experiences I've had in my years as a Hylian hero. The series has really been on a roll lately, and while I know this particular title isn't technically a proper entry, the distinction feels largely unnecessary. Play it as soon as you can, lovers of Hyrule, and see if you don't agree!
4.5/5

If you enjoyed this Cadence of Hyrule: Crypt of the NecroDancer Featuring The Legend of Zelda review, you're encouraged to discuss it with the author and with other members of the site's community. If you don't already have an HonestGamers account, you can sign up for one in a snap. Thank you for reading!