Its the future! Its all dystopian and miserable and ridiculously influenced by BladeRunner. Governments have slowly been replaced by big corporations, large cities are coated in neon and people are gormless sheep. So raise a cult! Have people worship the tech and fight back against their commercial overlords. Youre not a rabble rousing warlord  youre a prophet! Really try to jam in that pseudo-religion theme because, if you sell it hard enough, you might get away with the fact Re Legion is totally Syndicate dressed up.

This doesnt have to be a bad thing and, for the most part, absolutely isnt. Bullfrogs seminal cyberpunk strategy action thingy is still brilliant decades later and anything that might help us forget that awful FPS reboot can only be considered a good thing. Re Legion wants to play things out in a more classical RTS vein, however. Both games provide you with finite resources for building up your unquestioning army; you need to recruit from the populace, turning the everyman wandering the streets into your own little harbinger of death.

In Syndicate you wiped minds and turned people into dribbling servitude. In Re Legion you convert them into your religion, and Im not completely sure theyre not exactly the same thing. You do so under the command of the holy prophet (or Elion, if youre blasphemous) who returns from a pointlessly short self-exile to immediately gain control of The Resistance. Not because hes a tactical genius, and not through a cult of personality; more because everyone else is a moron. In the open stages, Elion appears stage left, gains the trust of wanted criminals with no struggle at all, and then decides to try and eliminate the mind control hub that turns the population into obedient consumer-obsessed zombies. This is hailed as an idea so manically brilliant that he is instantly hailed as a messenger of God. 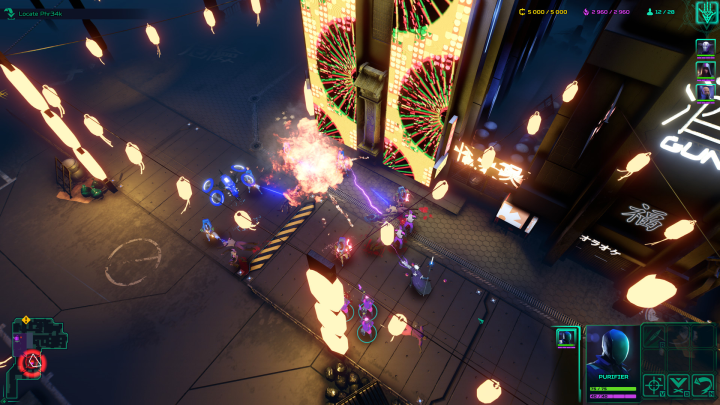 That should give you some idea of the weakness inherent in Re Legions writing. That the resistance, as it was, couldnt figure out the best way to free the minds of the people was to destroy the barely guarded brain washing machine located scarcely a mile away says more than I could. So youre better off letting all that plot noise play it loose in the background while you get on being the general of the peoples army  whether the people want it or not.

The basics revolve around gathering up and converting innocent bystanders and then having them kill themselves for your greater glory. Its often a more interesting means of recruitment than > build factory > produce grunts >, which is just as well, because you have zero options to produce your own structures. Rather, you have to hijack existing buildings of use already on the map, and then, maybe, defend it against pesky former owners who kind of want their stuff back.

That you have no scope to customise your mapscapes means you have to enter a different kind of mindset than most RTSs demand. You cant just turtle down, building up an overpowered swarm of troops and then steamroll everything once youre ready. To gain currency, you need to employ hackers to take over banks. But cash money will only get you so far; you also need faith, which you gather up and use to primarily upgrade your followers from simple peons to harder apostles. You can build this up slowly over time for as long as you live, or obtain special building where the little people can pray. In theory, this would mean a constantly alive map where footholds are gained and lost; where important buildings change hands and forces are split between those carefully probing into undiscovered territories and those trying to safeguard strategic points of interest. Only, that rarely actually happens. Sure, enemy forces will certainly try and take back buildings, but only if theyre present along their predetermined patrols. For the most part, once you take over a construction and destroy any surrounding forces, its yours for life. 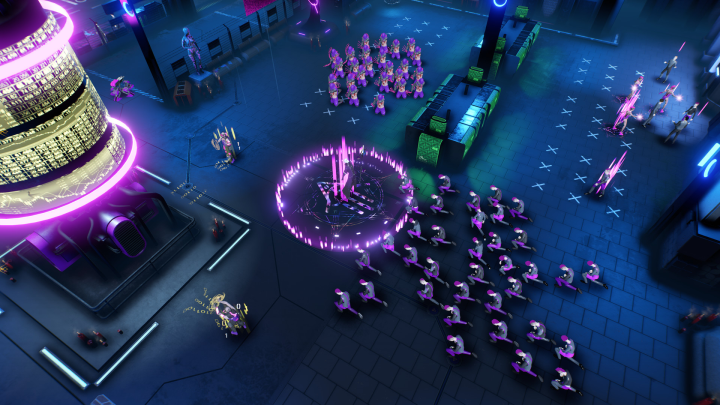 Heres the awkward bit. There used to be a paragraph here about dodgy AI and clumsy ally pathfinding, but its been made obsolete by one of those pesky patch things, delivered at no extra cost by the developers. The games nine missions will still be comfortably seen off in about seven or eight hours, but with considerably less time spent yelling at a small pocket of cultists who have split from the main group and are strolling into parts unknown to probably die horrible deaths. Its also brought a skirmish mode, where you can select maps, play about with the settings and then take on an isolated slice of war away from all that silly plot nonsense.

So props to Ice Code Games, who have continued to work on their project months after release in order to get it to the point they feel it should be at. It was fun to revisit a Syndicate-lite and slay all the pray away, even if I had to attack it in little bubbles to ensure the somewhat repetitive campaign didnt burn out on me too quickly. Youre unlikely to find a genre-changer nestled within the cyber-cult of tomorrow, but theres a goofy little throwback that might remind older gamers of a simpler time. A better time. A time before EA screwed it all up for everyone.
3.5/5

If you enjoyed this Re-Legion: Holy War review, you're encouraged to discuss it with the author and with other members of the site's community. If you don't already have an HonestGamers account, you can sign up for one in a snap. Thank you for reading!

© 1998-2020 HonestGamers
None of the material contained within this site may be reproduced in any conceivable fashion without permission from the author(s) of said material. This site is not sponsored or endorsed by Nintendo, Sega, Sony, Microsoft, or any other such party. Re-Legion: Holy War is a registered trademark of its copyright holder. This site makes no claim to Re-Legion: Holy War, its characters, screenshots, artwork, music, or any intellectual property contained within. Opinions expressed on this site do not necessarily represent the opinion of site staff or sponsors. Staff and freelance reviews are typically written based on time spent with a retail review copy or review key for the game that is provided by its publisher.