Oh well thats inconvenient, isnt it? See, I was going to get round to writing my long-procrastinated-on review of A Hat In Time, or maybe do a passion piece about pinball sims, but then three games landed in my lap in about a month, and they all needed my attention.

Chief among those, is todays subject: Dusk.

Not to be confused with the time of day, Dusk is, in fact, a videogame. A videogame whose primary concern is the gory murder of crazy cultists, faceless soldiers, and the creatures that lurk in your nightmares.

Ill be getting to that last part later, but for now, lets cover the nuts and bolts of this particular specimen.

Dusk is a first person shooter, though I feel like using that term for it doesnt quite describe its intents or functions quite right. Instead, for a more accurate idea of what youre in for, its more appropriate to use a much older term to describe it: Dusk is a Doom Clone.

The first, and most obvious clue that youre in for a very different experience to the modern shooter are the graphics, if not the adorable fake DOS screen that starts the game. In a relatively refreshing twist on the retro-styled trend among indie games, Dusk smartly opts to avoid going the 2d pixel art route, and instead styles its graphics after PS1 games. Perhaps calling it a Quake clone might be more appropriate, then.
Whatever the case, Dusk looks like something you might have played once on the venerable grey box, and if not for the much greater draw distance and lack of affine texture warping, I would believe you if you told me. Theres even an option to limit the colour gamut and pixellate the living daylights out of it, too, if you so choose.
As well as selling you on the throwback action youre in for, the graphics also ensure that Dusk will run on a toaster, so if youre the proud owner of an old Dell Optiplex, then you can get in on the action, too. 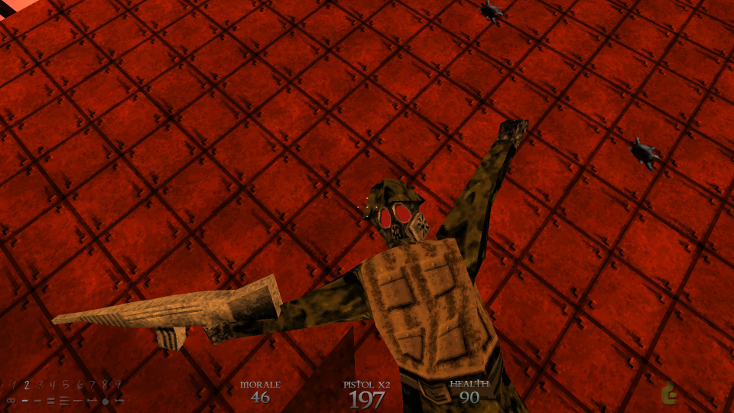 And what action that is.

At its most intense, Dusk arguably offers more satisfying shooting, running, jumping and sliding than any other Doom clone Ive played - old and new.
In true genre fashion, the nameless player character skates effortlessly around the environment, and is capable of firing off weapons until the heat death of the universe, without ever having to worry about reloading - provided you have the ammo. Naturally, said ammo (as well as health and armour) is liberally scattered around the level, to make sure that you always have something to blast enemies with.

Of course, it wouldnt be a Doom Clone without plenty of secrets scattered around the levels, and as such, Dusk provides plentiful bounties to the player willing to explore all the nooks and crannies, ranging from health and ammo, to entire secret levels. On the subject of levels, Dusk serves up a tasty mix of areas to skulk through and do battle in, ranging from a farm, to a mysterious facility, to Eschers Relativity. No, seriously.
As well as plenty of mook murder, youll be picking up keys along the way, though these are just about always situated at the end of a path, so you never have to go hunting for them. In fact, I cant think of a time when I got lost, which speaks volumes of the level design, and how well it facilitates the games near peerless combat.
The basic act of shooting an enemy in Dusk gives an immediate rush of endorphins every time: its really hard to understate how satisfying it is to turn a cultist into red chunks with the super shotgun. The sounds that accompany the gunplay are suitably meaty - particularly the assault rifle - and the animations are nice, too, providing plenty of sweet, sweet feedback to the player. Weapon variety also helps to keep things fresh as you tear through hordes of enemies, with the standard pistol/shotgun/rifle/melee types present and accounted for, though Dusk features some interesting additions, such as the crossbow, which flies through any and all enemies it touches.
Interestingly, you can also pick up objects in the environment, and throw them at your opponents as an economical alternative to guns, as well as use the objects to get to secret areas.
And finally, in case the 30 levels of campaign werent enough, theres an endless mode, and online multiplayer, should you need some more of that addictive skating and shooting action.
But of course, all that only makes for a technically impressive game. It takes a little something extra to make a great game.

Thankfully, Dusk has its own, distinctive brand of special sauce.
You know how I mentioned nightmares earlier? Well, Dusks way of making sure it sticks with you, is to well and truly get under your skin. You see, as well as giving it a certain look and feel, theres just something unnerving about PS1 graphics to begin with, so naturally, when you add on a strong horror theme, things start to get real creepy, real fast. Starting off on a meathook, and immediately facing three chainsaw-brandishing slashers, for example, can really set the tone for the rest of the game.
Enemy design, too, works to keep you from getting comfortable: regular enemies like KKK-style cultists and soldiers are already creepy, but more insidious enemies, like the scarecrows and the fork maidens.
God help you when you meet the wendigos.
The games atmospheric music and sound effects keep you on edge throughout, too, and where the music is concerned, Dusk has a secret weapon. The soundtrack absolutely, positively, bangs.
Without it, Dusk would be a fine experience, but the utterly brutal metal soundtrack from Andrew Hulshult elevates the gunfights to another level. The filthy, churning guitars get lower than a snakes belly, and thoroughly drive the action forward in big fights.

That is, of course, if you dont just stop to headbang.

Besides a killer soundtrack and an oppressively creepy atmosphere, Dusk is also not without an amount of whimsy and charm. The aforementioned Escher level, for example, is a highlight of how weird the game is willing to get, while things like hidden messages in out-of-reach areas are a delight to find.
Also, to quote the lead designer, the soap does 100,000,000 damage because its funny.
If you get tired of making the forces of evil recoil from your mighty soap, then youll have plenty of fun with the powerups, too. These range from the hallowed health, which awards a massive health boost, to the serum of blistering heat, which makes time move only when you move.
Now theres an idea for a game right there.

Ill admit, I had to get pretty anal about things in my search for Dusks downsides, but if you need some reason not to buy it, then I have a few nearly insignificant issues to bring up.
First and foremost, I had a consistent and crippling bug with my controller. For as much scorn as it may invite, I make no excuses for the fact I prefer a controller to play the majority of my games on PC, and so its particularly frustrating when my controllers dont work properly. While other players either wont have this bug or wont ever know of it, I found that Dusk simply wouldnt recognise controller inputs, from either my Xbox One controller, or my Dualshock 4. Eventually, I managed to fix this by going to the settings and mapping my trusty DS4s inputs to mouse/keyboard inputs: it wasnt perfect, but with some work, I got a nearly native controller experience. Not a good look for a game that boasts full controller support.
While Im on the subject, Dusk also has a couple of curious mappings as default, and a few that are unavailable on the default controller layout, which youll need to add in.
If youre interested, I recommend mapping crouch to circle/B, and mapping walk to L3.
Besides the controls, I found that the initial load time for the game is quite cumbersome, but then again, Im sure if I were to just join the masses and boot all my games from an SSD, that problem would soon disappear.
Finally, I found that Dusks autosave feature was unreliable. Its not so much of an issue when theres a manual save system available, but it still hinders the flow of gameplay, in my opinion.

I think its telling that three arguably subjective points are my only real criticisms of the game - Dusk really is that strong an outing.
With rock solid gameplay, a brutal soundtrack, distinctive visuals, its own clear identity, and plenty of content to keep you entertained, Dusk offers a comprehensive package of lightning-fast action and genuine creep factor. If youre a shooter junkie, Dusk is simply unmissable for the lovingly realised retro gunplay alone, and all the other goodies just make for icing on the cake.
If I had to sum this up in a single sentence, I would describe Dusk as being the shooter you remember playing in the 90s, not the shooter you actually played. Some twenty years of advancement in technology and game design, have allowed the format and looks of those old shooters to be revisited. Except now, the full scope of what those old shooters wanted to do can now be perfectly realised.

If you enjoyed this DUSK review, you're encouraged to discuss it with the author and with other members of the site's community. If you don't already have an HonestGamers account, you can sign up for one in a snap. Thank you for reading!

© 1998-2020 HonestGamers
None of the material contained within this site may be reproduced in any conceivable fashion without permission from the author(s) of said material. This site is not sponsored or endorsed by Nintendo, Sega, Sony, Microsoft, or any other such party. DUSK is a registered trademark of its copyright holder. This site makes no claim to DUSK, its characters, screenshots, artwork, music, or any intellectual property contained within. Opinions expressed on this site do not necessarily represent the opinion of site staff or sponsors. Staff and freelance reviews are typically written based on time spent with a retail review copy or review key for the game that is provided by its publisher.