Fire Emblem: Three Houses is a turn-based strategy RPG set in an anime medieval Europe (named Fodlan), made up of an Empire, a Kingdom, and an Alliance. The bulk of the game takes place in the Monastery, or Officers Academy (which is a lot like Anime medieval Vatican Hogwarts), where young nobles and commoners from all over Fodlan are split up into three houses based on where they live. All the students start off as stock anime characters, with a bit of a Game of Thrones influence.

Your father used to be the captain of the Knights of this church/school, and having been discovered alive, is pressed back into service. As you just happened to be tagging along with him, you are also given the job of professor with no interview or background check. Youll meet all the students of the various houses, and then pick which group you want to teach. Your students and fellow staff members all find it ludicrous that some rando off the street has been given such an important job. Perhaps the Archibishop knows something no one else doesnt? Foreshadowing!

Three Houses then progresses month to month using a calendar system not unlike a Persona game. At the end of each month, you will have a mission to undertake  a plot relevant battle that will move the story forward into the next month. Each Sunday, you can choose from various actions, such as participating in optional battles, such as sidequests or rare monster hunts, or you can rest (not something youll need to do early in the game), or you and your students can join a seminar from one of the other staff members to improve certain skills. 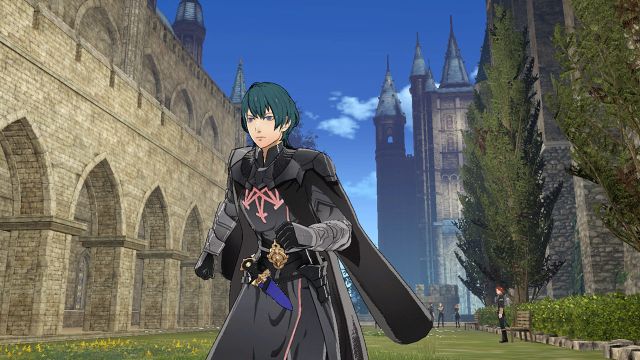 The main option, though, is to explore the monastery. This is where the ridiculously addictive gameplay loop comes in. Past Fire Emblem games were mostly about battling, with some limited character stuff in between. Three Houses avoids battle fatigue by spreading them out, instead letting you get into the most important part of the game  the waifu dating simulator. Odds are, by the games end, youll end up marrying one of your students (and this doesnt feel any less icky even though the second half of the game takes place after a five-year time-skip). I side-stepped this issue by marrying Shamir, a mercenary who worked for the knights before I recruited her.

There are so many things you can do while exploring the monastery, and they all have to do with building up your characters in three different ways  their skills, their motivation, and your relationship with them. Three Houses wisely introduces these mechanics slowly over the course of the first few months (which is kind of an extended tutorial). On your free days, you can wander around talking to everybody. If they like your response, you may see a love heart, which means your relationship is improving. Every single one of these was an endorphin rush.

Youll also get to do sidequests! In the beginning, these introduce various core mechanics, such as inviting students to join you for a meal (to improve their motivation and increase your bond with them). You can find lost items around the monastery and return them to the correct student for motivation and endorphin releasing hearts. Motivation is important, because on Monday, you get to train some of your students one on one in any skill you think they might need, and the higher their motivation, the more learning they will do. Youll need to build up their skills so they can master different classes. Everyone starts out as a noble or a commoner, but from there, you can mould them into whatever you want. There are a lot of classes to unlock in the latter half of the game, each with their own specialisations. Youll probably want to get their riding or flying skills up early so you can take advantage of the mounted classes as early as possible.

If your own skills are a bit lacking, you can request training from one of the other staff members, which improves your own skill and your relationship with them. You can also invite another character to join you for a cup of tea. Youll need to engage them in conversation, and if your social skills are up to it, youll get free control of the camera and can zoom in on their face and other areas. 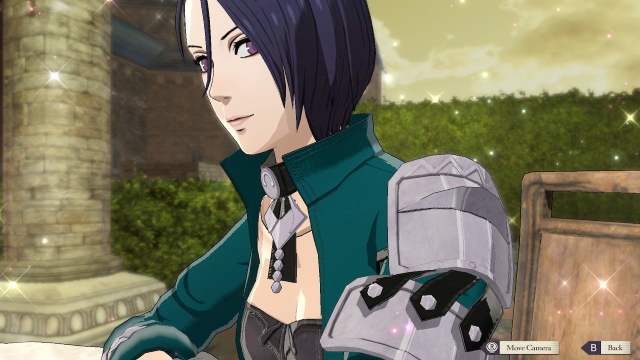 Building up your relationships allows you to unlock Support cutscenes. These skits showcase the characters from their somewhat flawed beginnings. Youll recognise quite a few anime stereotypes (I wont, as I dont watch anime), such as the reclusive shut in, the overbearing ladies man, people with no self-esteem, people with way too much self-esteem, the annoying little girl with green hair, the best girls (and guys, I guess), and your fellow staff members. The impressive thing is that each character will also have Support cutscenes with all the other students in their own house, plus selected students from other houses, and some of the staff. Even more impressive is that each line of dialogue in the entire game is fully voiced. You often get those lazy RPGs that only bother to pay the voice actors for the important cutscenes. Three Houses puts them to shame.

Your Sunday activities are limited by your activity points (which start off low but increase with your standing as a professor). Then you sigh and press the button to finish exploring. It is then time for Monday! You get to educate your team, set their goals (the skills they will automatically learn throughout the week), set some teamwork goals to build support and skills, and answer some questions from your students. The rest of the calendar days will zoom by, unless theres an event (such as a Support conversation, or choir, or someones birthday), and youll soon be back at Saturday where you get to do it all again.

Then it will be time for battle. Youll be told the conditions (kill everyone, kill the enemy commander, win in a certain number of turns, etc.) You can purchase weapons to kit out your party, set your party formation (or select who is participating if you have too many), then begin the battle. In your turn, you can move all your units around and engage the enemy with melee attacks, archery, or magic. The tactics side of this is intuitive enough. You can move your character, select an attack, and youll be given a prediction of what damage both parties will take. This allows you to either select a different weapon or combat skill or cancel the move and try that unit against another enemy thats in range.

One interesting change from previous Fire Emblem games is that now each unit can lead a battalion of troops. If you zoom right in on the battle, youll be able to see them in formation around your unit. I personally preferred to play zoomed right out, as I liked to see the battlefield, but the option is there if you want to play zoomed in. Each battalion has their own gambit move, which have varying effects on the enemy, such as paralysing them for one turn, or poisoning them, or giving your own party a boost.

As this is a Fire Emblem game, your characters can permanently die (unless you're playing on casual). There is a game mechanic that can mitigate the risk, though. You get an ability called Divine Pulse, which can rewind the time a bit. I never had to use it as I was playing on casual - the thought of any one of my characters dying permanently was too huge a source of anxiety for me. 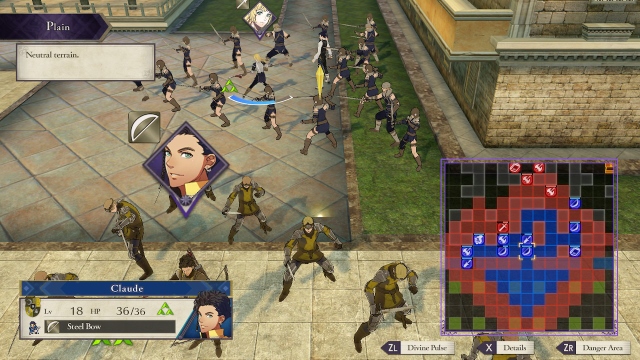 All of these elements combine to create one very addictive experience. By changing the type of game youre playing, and by providing so much incremental progress, you can easily lose a whole day (and night) playing this, and still not feel like youve had enough. I am an adult with a full-time job. When Im not at work, I have to cook, clean, and get myself to bed at a reasonable hour. Since Fire Emblem: Three Houses was released, Ive had trouble functioning as an adult. In three weeks, Ive clocked up 80 hours of play - and Im on my second playthrough, which I started less than a day after finishing the first campaign, and Im not planning on stopping any time soon.

Like the name suggests, Three Houses is really three games (although technically there is a fourth path). Youll choose one of the houses and get to know and love those characters. You may even recruit some students from other houses, although without the features of New Game +, this is challenging, and not really needed. Your core group will get you through the game. The first half is pretty much the same no matter which house you pick (although having a different cast does help keep things fresh). The second half of the game follows a campaign specific to the house you aligned with. I still have so much more to do, and even as I sit here writing this review, I want to keep playing but I have work tomorrow and its already late.
5/5

© 1998-2020 HonestGamers
None of the material contained within this site may be reproduced in any conceivable fashion without permission from the author(s) of said material. This site is not sponsored or endorsed by Nintendo, Sega, Sony, Microsoft, or any other such party. Fire Emblem: Three Houses is a registered trademark of its copyright holder. This site makes no claim to Fire Emblem: Three Houses, its characters, screenshots, artwork, music, or any intellectual property contained within. Opinions expressed on this site do not necessarily represent the opinion of site staff or sponsors. Staff and freelance reviews are typically written based on time spent with a retail review copy or review key for the game that is provided by its publisher.