Whether it's Puyo Puyo, Columns, or Super Puzzle Fighter II Turbo, these falling-block puzzlers have their own take on the formula, but don't stray too far from the main template. As blocks, gems, or gelatinous creatures, in various colors, endlessly fill a square-shaped container, you're tasked with eliminating them at length; to do so, you must connect objects of the same color to make them disappear, with larger batches netting greater results and with potential chain reactions of other colored pieces collapsing in their place. It's a design that's been copied countless times for a good reason, as its "basic" premise requires a lot of thought, skill, and reflex under duress, especially when blocks continuously fall at a faster rate over the course of several minutes. 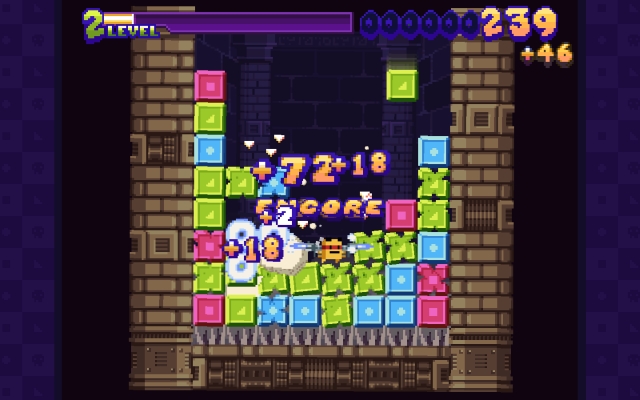 Super Puzzle Platformer Deluxe also uses this template, except, instead of controlling the falling blocks, you're given control of a small, box-like figure that jumps around and shoot at blocks. Essentially, the game is an action-platformer trapped inside a puzzler. It's an interesting fusion, but one that easily fails if the two genres' strengths aren't used in an appropriate, fun manner. However, in the first stage alone, the game demonstrates the need to earn your victory in order to progress. It begins on a flat ground surface of blocks, where you have to wait for several more blocks to fall before proper group destruction can commence. This flat arena becomes a surface of lumps and, within a span of over a minute, transforms into mountains and deep pits that can mean your demise if a slight mistake is made during the sudden increase in challenge.

Basically, the lone developer uses the puzzle's core design against you, and in doing so, force you to use... thought, skill, and reflex under duress, within an action-platforming mentality, in order to succeed. One such example includes the very act of making huge chunks of blocks disappear. This is a hazard due to one simple inclusion: the bottom of the square-shaped container is a spike pit. You think this would be easy to avoid, but it's actually surprising how many times a mass of one color dominates the field; not only do you have to make sure you're standing on a different colored block, not only do you have to avoid falling blocks, especially when rows drop in succession, but... you might have to destroy this huge body if you're stuck at the top, about to be crushed.

Curbing the block-filled arena won't be your only challenge, as each stage offers unique obstacles to overcome. In place of blocks, you'll frequently encounter falling hazards with chainsaws or laser beams, and in later stages, you'll face harder hazards, such as huge rotating spiked balls and homing rockets. What makes these particularly challenging is the fact that you can't directly destroy them, instead having to blow up an adjacent block; that in itself can be rough, since those blocks might destroy a bigger group that would land you in a crevice, or the hazard might be in an awkward spot, forcing you to destroy several blocks to reach it. Now imagine having to counter these threats while also having to maintain order with normal blocks, all while hopping around a condensed arena. You're constantly on alert.

Super Puzzle Platformer Deluxe is a neat, creative fusion of two genres. It's a bit on the short side, but it's still an entertaining nugget, a game that simply succeeds at being a fun little romp by using those genres in a way that make them work together naturally. Whether you want a break from longer titles or just want to enjoy "shorter" games in general, Super Puzzle Platformer Deluxe will definitely give replay value with its main mode, offline two-player versus mode, and skill-based survival challenges that get silly with its tasks; have fun navigating a bed of TNT or being stuck in the middle of a projectile fiesta!
3.5/5

If you enjoyed this Super Puzzle Platformer Deluxe review, you're encouraged to discuss it with the author and with other members of the site's community. If you don't already have an HonestGamers account, you can sign up for one in a snap. Thank you for reading!

© 1998-2020 HonestGamers
None of the material contained within this site may be reproduced in any conceivable fashion without permission from the author(s) of said material. This site is not sponsored or endorsed by Nintendo, Sega, Sony, Microsoft, or any other such party. Super Puzzle Platformer Deluxe is a registered trademark of its copyright holder. This site makes no claim to Super Puzzle Platformer Deluxe, its characters, screenshots, artwork, music, or any intellectual property contained within. Opinions expressed on this site do not necessarily represent the opinion of site staff or sponsors. Staff and freelance reviews are typically written based on time spent with a retail review copy or review key for the game that is provided by its publisher.