Konami's vampire hunting series gets an Arcade treatment, even if it isn't a good one. Haunted Castle was released in 1988, right after Castlevania II Simon's Quest for NES. It was intended to be the Arcade adaptation for the NES console version but it seemed like Konami just did not wanted to go ahead with said plan. Well, I would not blame them to be honest. Haunted Castle looks and sounds great as an idea but suffers in execution once you try it out. 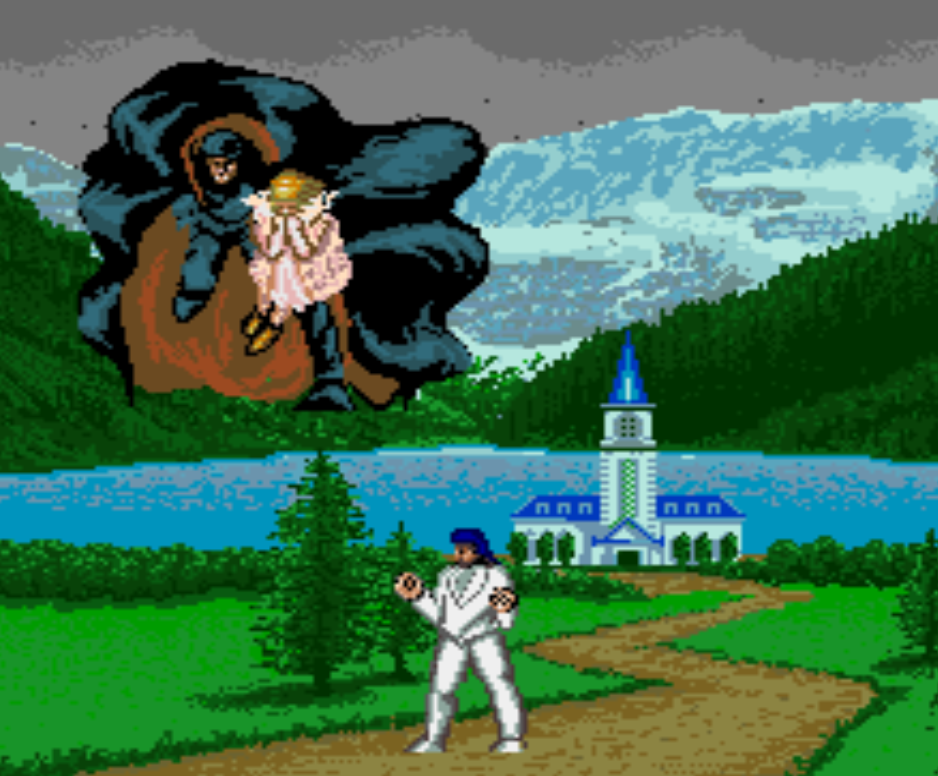 The story is quite different on this retell of Simon's fight with Dracula. For starters, his motives are that of rescuing his newly wed wife who was captured right after his wedding, not just because he needs to get rid of the land from evil. This premise strikes a huge blow in diminishing its lore with the series' eternal struggle between the Belmont clan and the lord of darkness, tossing it aside for the damsel in distress scenario. I know there have been other titles on which you needed to rescue someone, but said titles also included Dracula as someone who was a threat to an entire world, not just a horny demon who needed companionship. Needless to say, it gives Simon enough motivation to pick up the whip and go demon slaying here. 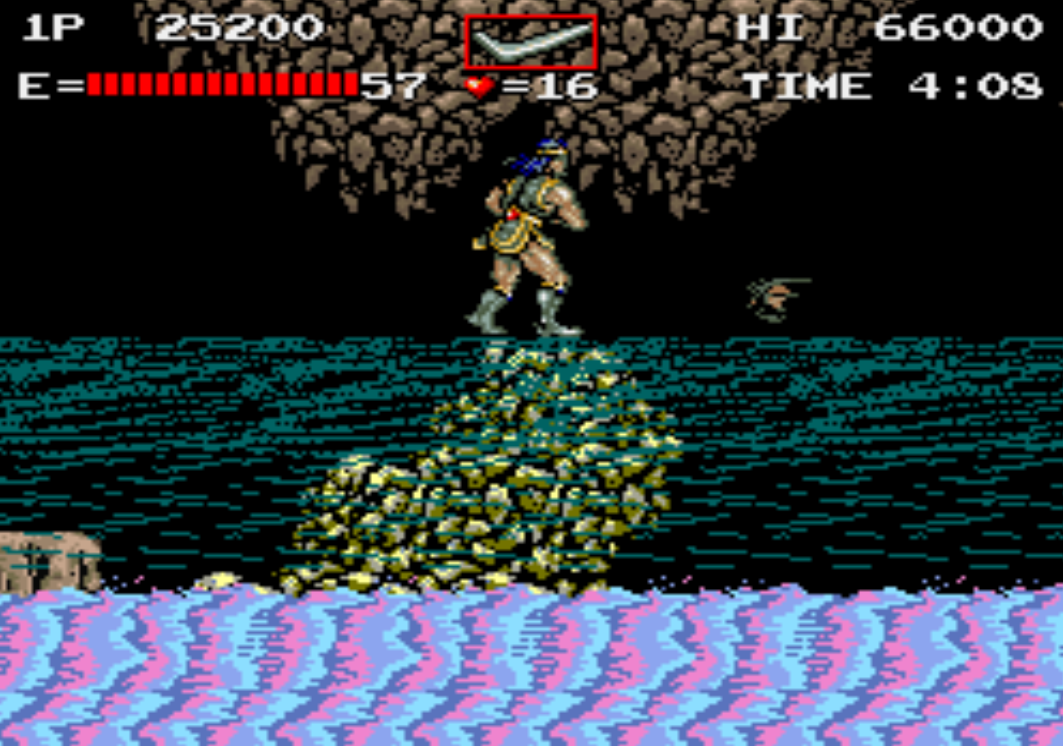 Another aspect of this game in comparison to the general series is that while it does provide with the fabled whip and sub-weapons, all of them have some weird changes. For instance, the whip is upgraded to a morningstar and a sword as its strongest version, but you cannot do so in the same stage, rather, said power-ups you obtain as you make progress through the game as a whole. The sub-weapons are quite different here, having a bomb, slanted boomerang, a crucifix, and a torch replacing most sub-weapons familiar to gamers in other games. The sole sub-weapon which remains the same is the watch, which can also be used to freeze bosses and make the journey a bit easier. 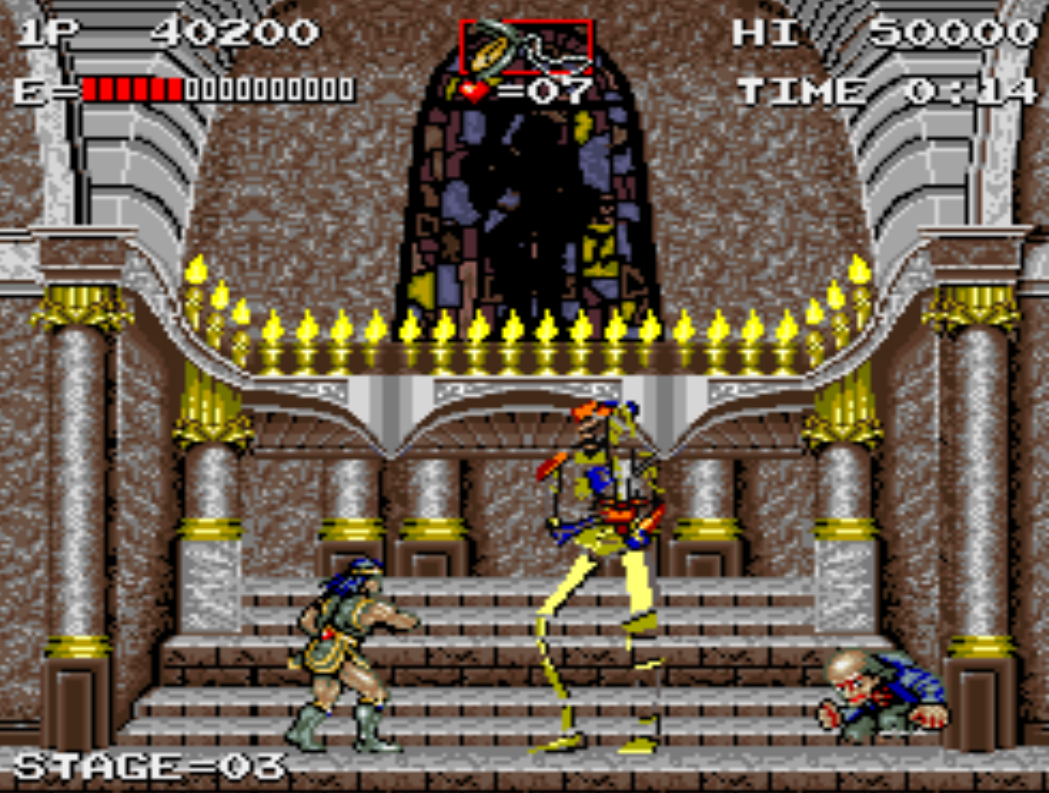 As you travel on your way to the nefarious castle you will have to cross haunted grounds like a cemetery and underground caverns, which are not easy by any means even though they are the first stages you go through. Once in the castle is a matter of surviving pesky fleamen, enchanted armors, the occasional skeleton and bat and even poltergeists controlling dining tables. After all that you encounter bosses in the shape of Medusa, a tall stained glass knight, a mud golem, Frankenstein's monster, and the big bad Dracula himself, who also has a second form as he does with any other game he as been featured on.

The graphics can be derived as simplistic yet effective when it comes in giving Haunted Castle a creepy atmosphere. This paired up with its excellent soundtrack can almost forgive its horrible gameplay and hard as nails difficulty. You only get one life and it can quickly vanish by mere hits from enemies or falling into a bottomless pit. On top of this continues are limited, something which no doubt will upset many who try playing this game. There is also no health items to refill your health bar here, other than adding more credits to expand it so you may increase your chances in beating the game. This of course would not save you from losing an entire life if you fall into the aforementioned pits. However you can either choose to have an inmense number of hit points purchased by credits, or prefer to be able to have any continues left within the game. You cannot have both as everytime you refill your bar you scratch off an opportunity to continue the game. This is simply unfair all in all. 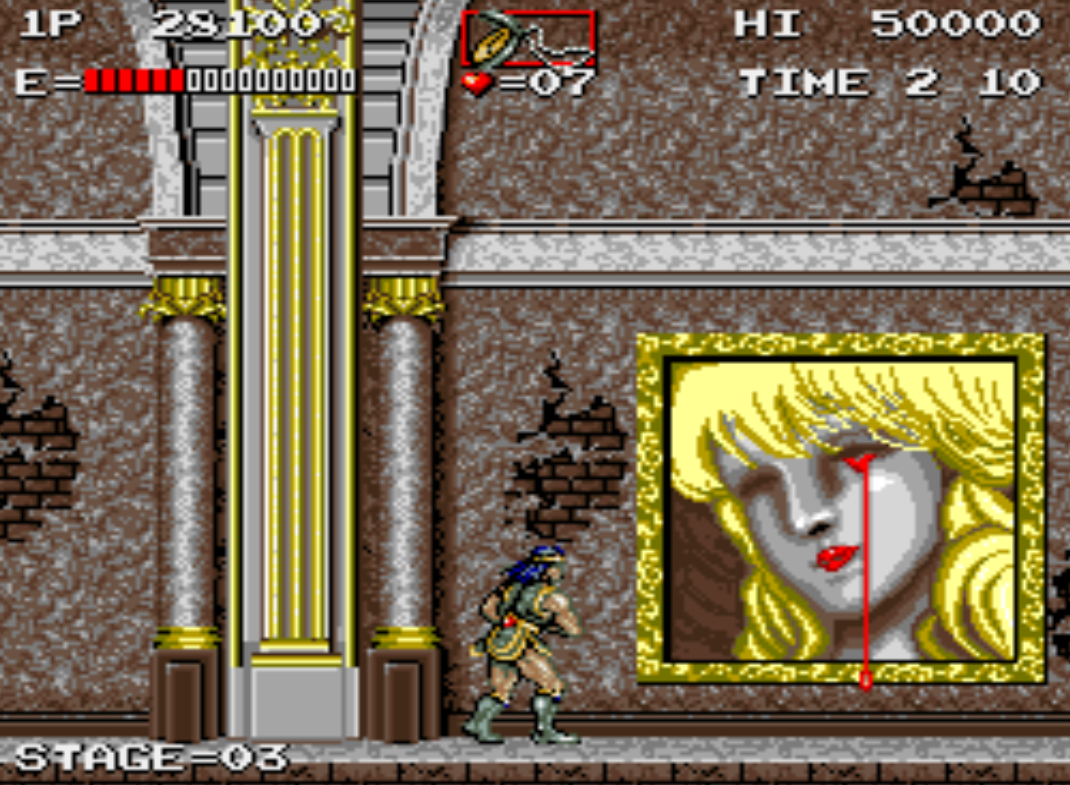 Simon controls quite awkwardly and the way he moves does not help any. You do have some control on his jumping which can count as a saving grace. The hit detection is as wonky as his walking and you will get a lot of unfair hits from time to time. The level design can be confusing, and it even seems like some of the stages probably weren't even finished as some show paths to seemingly other sections even though you are lead to continue elsewhere. Pretty easy to get lost within the castle itself unless you rely on trial and error to know the right way after a few tries. 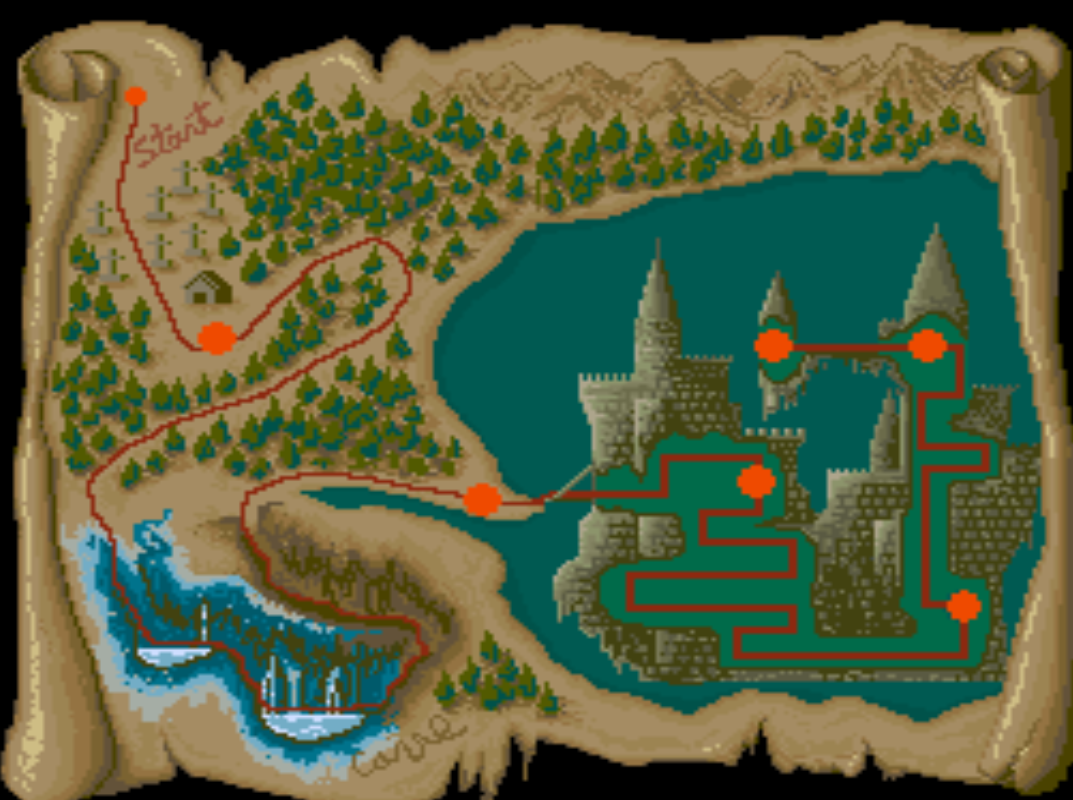 Haunted Castle is a relatively short game but the way of getting through it is what measures its complexity. You can dispute that because is a quarter muncher, it would make sense that it would be harder than anything else, but it does not mean that it would be so difficult that you simply lose interest on ever trying it again. Besides the fact the game is hard to begin with, there is also another setting which makes it even harder to go through. This sounds more like a masochistic way to ever take on Dracula than a test to save a loved one.

Still, if you are curious as to how an Arcade version of Castlevania would play then you would certainly give this a try. There is not much to convince you in doing so otherwise.
2.5/5

If you enjoyed this Haunted Castle review, you're encouraged to discuss it with the author and with other members of the site's community. If you don't already have an HonestGamers account, you can sign up for one in a snap. Thank you for reading!

© 1998-2020 HonestGamers
None of the material contained within this site may be reproduced in any conceivable fashion without permission from the author(s) of said material. This site is not sponsored or endorsed by Nintendo, Sega, Sony, Microsoft, or any other such party. Haunted Castle is a registered trademark of its copyright holder. This site makes no claim to Haunted Castle, its characters, screenshots, artwork, music, or any intellectual property contained within. Opinions expressed on this site do not necessarily represent the opinion of site staff or sponsors. Staff and freelance reviews are typically written based on time spent with a retail review copy or review key for the game that is provided by its publisher.