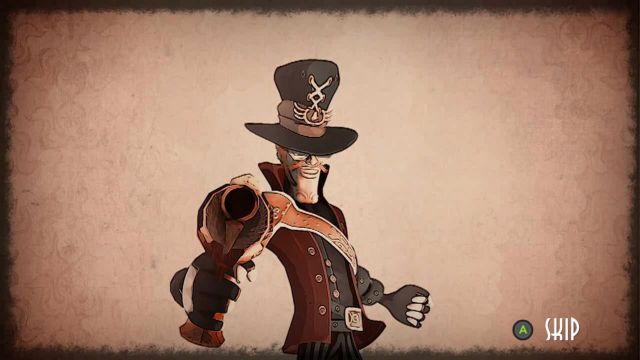 I can't think of many games that have left little to no impression on me. Maybe I can't recall them because they were so forgettable that I literally forgot them. One side-scroller I played recently, Wells, may well join that club in a few months. Everything about it is just average, from its presentation to its features. It's not especially exciting or innovative, but it's sufficiently functional that I can't even say it's "remarkably bad." It is the very definition of a mediocre video game, neither offending its players nor thrilling them.

Your first glimpses of what it has to offer should tell you all you need to know. Drab, earthy tones dominate the screen, combined with dull grays and the occasional bit of red or blue. Steampunk style oozes from each screenshot, but similarly fails to wow during a time when such an aesthetic has become played out. This isn't to say steampunk is a bad choice, but it's one that's easily ignored because we've seen a lot of the cosmetic end of it over the last decade. I'm no longer turned on by gears and goggles for the sake of gears and goggles.

I can forgive visual style, though, because this is a run 'n gun title. The qualities I should examine more closely relate to frenetic action games where you charge fearlessly through crowded environments, guns blazing, bullets flying everywhere, explosions and death and aliens all over the place. Oh, and sometimes you jump over things. You finish a level with a thunderous boss encounter, drop your controller and stop to catch your breath. You then return to the battlefield, ready to take on an even tougher challenge than before, hoping you have enough lives and patience to reach the climax. 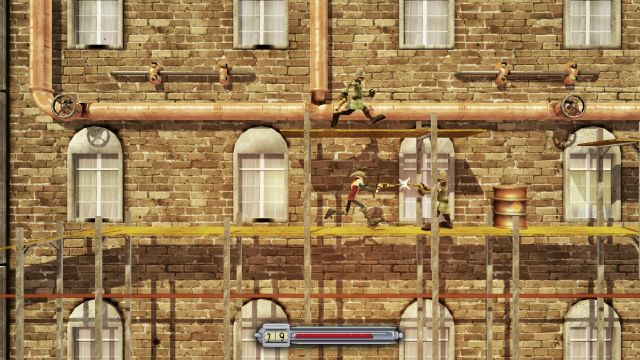 Wells, in contrast, plods along at a moderate pace. You don't run into the fray so much as stroll from one point to another. You fire rounds at human targets and a few different types of drones or tiny, robotic pests, and they perish with little fanfare. Human goons slump over and vanish with a light groan, and any mechanical menaces exit in anticlimactic fashion. To make matters worse, each gun eventually runs out of ammo and you have to wait for Mr. Wells to reload. Because nothing improves a slack pace and lackadaisical combat like constant breaks in the action...

At the same time, play control could've been this game's undoing and thankfully wasn't. I've played a number of run 'n gunners similar to this one that sported either confusing controls that couldn't be properly configured, or faulty twin stick aiming mechanics. This one, though, comes with fair control response, an easy layout and terrific aiming. That enabled me to actually play completely through its tedious campaign without finding reason to blame the controls for any mishaps.

That's not to suggest that my character met with frequent and untimely deaths, mind you, as the challenge factor is fairly minimal. You really don't need ace controller skills to get through this one. The early outs pit you against the most expendable adversaries available, who fall after a couple of shots from your weakest arm. Meanwhile, they rain bullets on you, and you don't even bother dodging all of them. Our hero is quite the bullet sponge, and can absorb numerous shots before needing to duck for cover. Once there, he recovers his health, a la Call of Duty, and hops back into the fray. 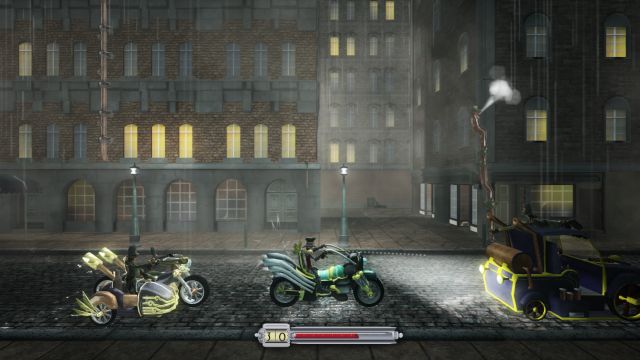 Sadly, the auto-restoring health system further hampers play and causes the pacing to deteriorate. There's a reason games like these use one-shot kills or standard health meters: those functions keep the action moving at a snappy pace. When you have to duck for cover every so often or stop to reload a firearm, the pace drops. The last thing you want in a run 'n gun piece is downtime.

Wells has a few other tricks up its sleeve, though. It offers you an array of unique weaponry, including a gun that shoots spiked balls and a freeze blaster. However, the game fails to make the most of these inclusions. Instead it forces you to change weapons often. You'll plow through a field of standard soldiers, only to run into either a robot spider generator or a shielded villain. The former requires you to switch to the freeze gun, and the latter is just begging for a trigger bomb. So you drop everything you're doing, fumble for the weapons and fire a single shot, all before taking more time to re-equip the shooter of your choice. This happens often, too, and feels no less clumsy every time you encounter one of these segments. 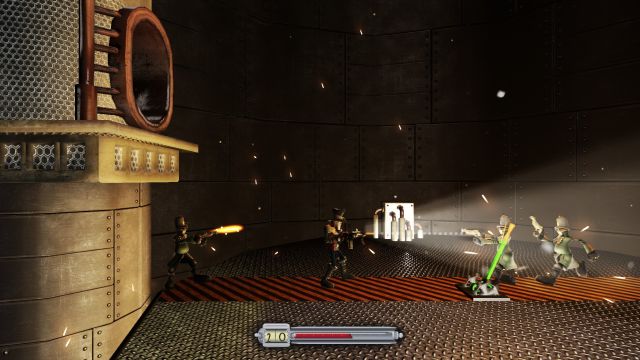 One level takes you away from the ho-hum streets and rooftops and onto the road. Wells leaps onto his motorcycle and blasts away at vehicles and flying robots. However, every encounter plays out the same way: you destroy the same two or so foes for several minutes before happening upon a boss. I will praise the game very briefly here, because the airship you fight during the motorcycle segment is decent, and requires more than mindless shooting.

I wish I could gab longer about Wells, but there really isn't much content that stands out. Granted, there's a decent scene where you leap from one balloon to another while drones open fire on you, and some of the animated sequences include blatant class warfare commentary. Outside of those two elements, the game is as unremarkable as it can get. Nearly every segment runs together; every ladder I climbed, platform I ascended, destructible floor I shattered came together to establish a shapeless mass of hazy memory. That's not something I should say about a game belonging to a genre characterized by intense action and tons of surprises.
2.5/5

If you enjoyed this Wells review, you're encouraged to discuss it with the author and with other members of the site's community. If you don't already have an HonestGamers account, you can sign up for one in a snap. Thank you for reading!

© 1998-2020 HonestGamers
None of the material contained within this site may be reproduced in any conceivable fashion without permission from the author(s) of said material. This site is not sponsored or endorsed by Nintendo, Sega, Sony, Microsoft, or any other such party. Wells is a registered trademark of its copyright holder. This site makes no claim to Wells, its characters, screenshots, artwork, music, or any intellectual property contained within. Opinions expressed on this site do not necessarily represent the opinion of site staff or sponsors. Staff and freelance reviews are typically written based on time spent with a retail review copy or review key for the game that is provided by its publisher.