The third installment on the NES was unexpected, being that by that time the SNES was on about and it meant that Turtles in Time had been adapted into the 16-bit console. Nevertheless, Konami delivered in spades on this game, having added a variety of gameplay mechanics and other bells and whistles to make it into an enjoyable playthrough with the turtlesome four. The story goes that the TMNT are taking a vacation break all the way into the sandy beaches of Florida watching TV when the broadcast is interrupted with the evil Shredder capturing April ONeil and levitating the island of Manhattan onscreen. He issues a challenge to the turtles whom gladly accept and drop everything in order to go and save both April and their hometown. 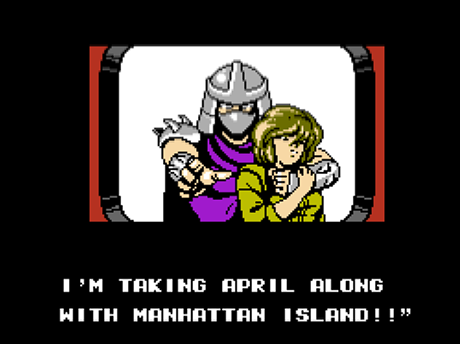 While the story really brings nothing new into the series, the gameplay compensates quite nicely in contrast. Each turtle now has their own special attack which also drains their health, something which I find quite aggravating but also gratifying being that you do not get penalized when you only have one digit of life left. This however can also be a double edged sword being that you could lose a life with a single hit received or falling into a trap hazard which are quite prominent on this sequel throughout the game. Another addition is the ability to toss your enemy over your head with your weapon by holding up plus the attack button, a much preferred method to get rid of most enemies and which can expand your success of making it through stages. Another aspect on this sequel is that you can choose from all 4 characters after a life is spent, something that adds to replayability on the long run. Other changes include the score system, which now racks up in points in comparison of keeping a tally of enemies defeated as in the last game. 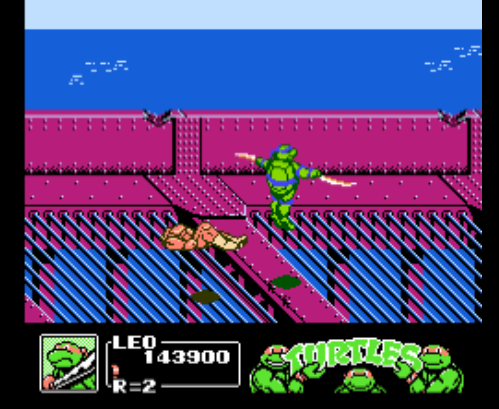 The title intro to the game is quite something, rehashing the TV opening and adding its own scenes into it right before the title appears onscreen. The addition of a voice sample as you press start is also a nice bonus. The music has some nice tunes in stages, all with original tracks made just for this sequel. The variety of enemies is expanded, having footsoldiers tossing sand on your eyes and even introducing menacing rock soldiers in early stages as well. This game sure doesn't fool around. There are also new animations added, such as when a character gets squished by a heavy object for instance. This game is just so campy it hurts. As stated, it is quite curious to see that a stand alone sequel was made while the arcade adaptation of Turtles in Time was ported to the SNES. It seemed like Konami just wanted to share more TMNT adventures with anyone still owning an NES system. This also is more apparent with the fact that there was a version of Tournament Fighters for both systems as well. 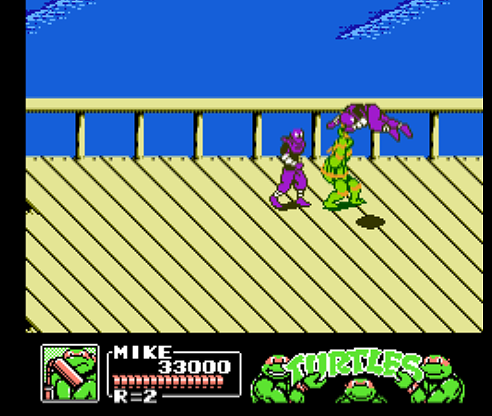 TMNT 3 is an excellent title nonetheless and quite a fun one to play. The gameplay is much refined over the past title and it really feels like you can have fun with it whenever you pick it up to play. It would not matter if it clashed with Turtles in Time for the SNES at the time; not really, this game simply delivers with all the right intentions.

If you enjoyed this Teenage Mutant Ninja Turtles 3: The Manhattan Project review, you're encouraged to discuss it with the author and with other members of the site's community. If you don't already have an HonestGamers account, you can sign up for one in a snap. Thank you for reading!

© 1998-2020 HonestGamers
None of the material contained within this site may be reproduced in any conceivable fashion without permission from the author(s) of said material. This site is not sponsored or endorsed by Nintendo, Sega, Sony, Microsoft, or any other such party. Teenage Mutant Ninja Turtles 3: The Manhattan Project is a registered trademark of its copyright holder. This site makes no claim to Teenage Mutant Ninja Turtles 3: The Manhattan Project, its characters, screenshots, artwork, music, or any intellectual property contained within. Opinions expressed on this site do not necessarily represent the opinion of site staff or sponsors. Staff and freelance reviews are typically written based on time spent with a retail review copy or review key for the game that is provided by its publisher.