Within the first few moments of Guard Duty, hidden away with the enforced subtlety of a well-aimed half brick to the face, you will find a reference to 1995 point-and-click classic, Discworld. This is not by accident; Sick Chicken Studios debut outing less wants to be like the pixel-plotted adventure games of the 90s and more outright wants to be one. It borrows heavily from their founding foundations, presenting inventory puzzles and bizarrely broken lateral logic atop a veneer of satire and ludicrousness. For example, Monkey Island had Guybrush, a pirate wannabe so hopeless no crew wanted any part of him. Discworld had Rincewind, a man so absolutely inept at any form of magic he could only call himself a wizard via an obscure technicality. So Guard Duty has Tondbert, who has only found employment because even guards need someone to bully.

Guard Duty invests hard in the desperate underdog trying to come good trope, setting Tondbert up as the reluctant hero swept up in the rescue of a princess whose kidnapping was only marginally his fault to begin with. He needs to track down a dark cult and put an end to their nefarious plans, and all that, but first he needs to remember where he left all his clothes after getting obliterated at the local pub the evening before. Also, a bird has nicked his helmet. Also, bees happen. Always with the bees. 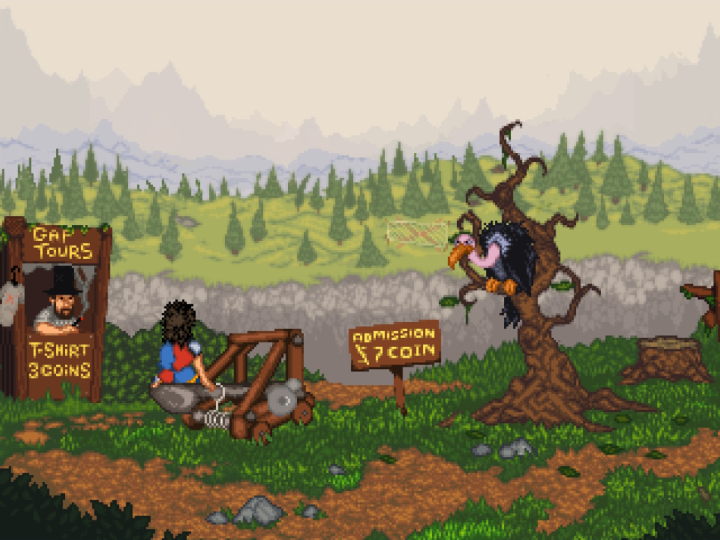 That Tondbert is made the butt of all jokes is very 90s point-and-click. Hes a goodhearted simpleton trying to get by in an often mean-spirited world that will do him few favours and instead forces him to fix all his myriad woes with whatever junk he crams into his pocket and can fashion into bizarre solutions. In this, Guard Duty strays furthest from its inspirations; though it insists you check your common sense at the door, the ridiculous solutions youll need to sleuth out are rarely particularly taxing. Discworld would ask you to rub a badger anticlockwise with a spoon made of apple cores at the stroke of midnight to gain access to a new area. Guard Duty just asks you to find your boots first.

It could be said that figuring out these puzzles is a little too easy for experienced campaigners, and, as an experienced campaigner, I will say just that. Theres a particularly tricky line to walk where the player needs to be challenged enough to feel rewarded for finding a solution but not frustrated enough to run off to an online FAQ or quit the game forever. But to Dutys credit, it goes to great lengths to justify the lack of difficulty as part of Tondberts buffoonish stumbling towards glory. He doesnt have the arrogance or entitlement of a Guybrush or a George Stobbart; theres no building joy in seeing him get a comeuppance, no smug pseudo-intellectual theory to gleeful watch crumble. Hes a self-aware simpleton just keen to do his part in helping out; a particularly taxing task would probably be beyond him. 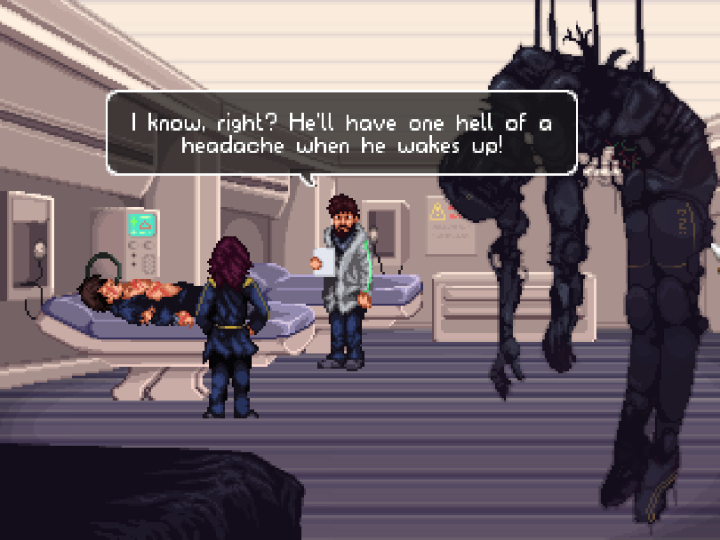 This is built upon by the final sections of the game, which take a massive leap forward in time, dismissing all that whimsical medieval fantasy skylarking, and producing a dystopian cyberpunk futurescape borne directly from Tondberts actions. Here, the new protagonist doesnt need the player to mash bits of inventory together for him; hes a sci-fi secret agent, not a bumbling palace guard. As such, Starborn possesses two things: 1/- the ability to make contextual sense of his belongings and surroundings: 2/- a ridiculously on-the-nose name.

Its a decent idea, having most of the game being a goofy quest riffing off fantasy cliché, and the latter sections trying to deal with the fallout caused dozens of lifespans later. The later stages of Tondberts quests are even laced with enough edge to stop the transition from being jarring; you know somethings about to go very wrong, so the unforgiving cityscape of tomorrow doesnt bleed awkwardly from the casual skylarking of yesteryear. Despite the games short runtime of four or five hours, it manages to give both periods their time to shine, both satirical in their own rights, but both driving home the need to complete their shared quest. Turns out, theres bigger things to worry out than trying to retrieve your tunic from the village hag, or figuring out just how to get that bloody blacksmith to talk to you. Much bigger things.
3.5/5

If you enjoyed this Guard Duty review, you're encouraged to discuss it with the author and with other members of the site's community. If you don't already have an HonestGamers account, you can sign up for one in a snap. Thank you for reading!

© 1998-2020 HonestGamers
None of the material contained within this site may be reproduced in any conceivable fashion without permission from the author(s) of said material. This site is not sponsored or endorsed by Nintendo, Sega, Sony, Microsoft, or any other such party. Guard Duty is a registered trademark of its copyright holder. This site makes no claim to Guard Duty, its characters, screenshots, artwork, music, or any intellectual property contained within. Opinions expressed on this site do not necessarily represent the opinion of site staff or sponsors. Staff and freelance reviews are typically written based on time spent with a retail review copy or review key for the game that is provided by its publisher.