When you first load iHUGu, you are treated to a quote from a peace-loving and famous person. I don't remember who was responsible for the quote I saw on my maiden voyage, but the point of that initial message was that we're all drops of water by ourselves, but together we're an ocean. My second trip to the title screen included a different phrase, this one from Pope John Paul II: "The worst prison would be a closed heart."

So anyway, iHUGu is a game designed to encourage peace and love and good feelings, all without the use of illegal narcotics. "Love will set you free," someone sings in the background, and the song loops until maybe you think to yourself that "Mute" on your remote will set you free. Still, it's hard not to appreciate the sentiment and hope you're in for a good time. 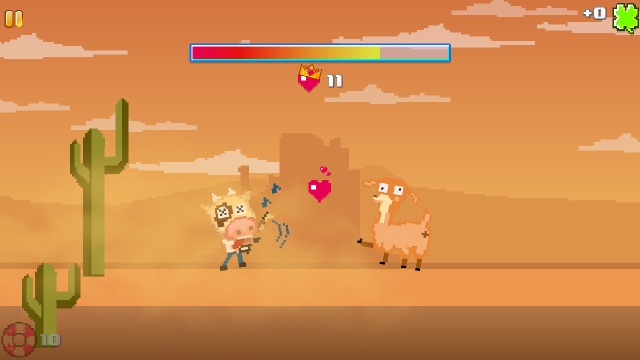 The point of iHUGu, you find almost immediately after you start playing, is to hug everyone. There are rules, though, because otherwise there wouldn't be much of a game. Specifically, you aren't allowed to hug the same person twice in a single in-game day. So you race automatically along a street or trail or tunnel or whatever, and frequently encounter individuals who may or may not need the comfort of close physical contact. A bar at the top of the screen starts to empty each time, lending those sudden encounters a necessary sense of urgency. Do you hug them? They look sort of familiar. If you go in for the hug and it turns out the two of you have recently embraced, there ends your run. If you pass them by and it turns out you didn't get cozy earlier in the day, that also ends poorly.

A "day" consists of a string of those quick encounters, and then there is a mini-game where you may have the opportunity to collect lucky clovers, which are the game's currency. In one of the mini-games, you get in a pushing fight with a giant heart and must nudge it quickly off the edge of the screen to score the biggest rewards. Elsewhere, you're riding down a street on your skateboard and leaping over garbage cans. Or you run back and forth while clover falls from the sky and try to grab every leaf you can. 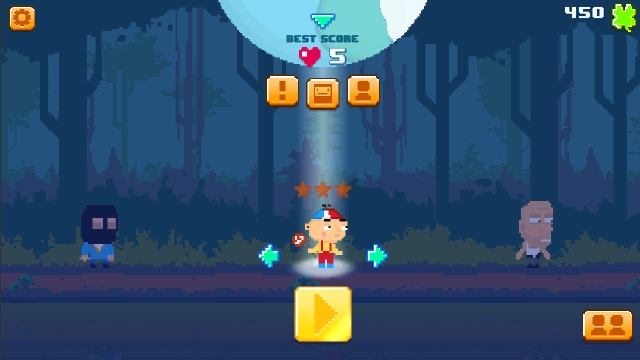 The clover you have an immediate use for, because you can spend 100 clover for one pull of a slot machine. If you're lucky, you'll win an additional character. There are a lot of those on offer, more than 100. But sometimes you'll get other things, like stars that let you bring back more clover at the end of a long run, or life preservers that you can use to skip a character when you don't feel safe going in for a hug but also aren't confident you can safely ignore them.

Clearly, the additional characters are intended to serve as a selling point for the game. They are generally caricatures. There's a Bob Marley sort I unlocked pretty early, for instance, and I'm pretty sure the black guy with the big ears is supposed to be Barack Obama. Plus there's an Elvis impersonator, and a woman in a hijab, and so on and so forth. There's also a llama, and there are people running around in a giant shark's head. Basically, the developers seem to have thrown in just about everything that occurred to them. 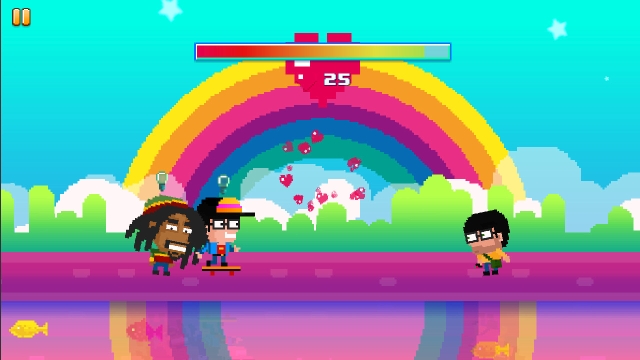 I suppose some people might take offense, when confronted with one stereotype or another, but since the characters don't really do anything except stand around waiting for a hug, I'm not sure any lines are definitively crossed. The point of the game seems to be inclusion, rather than ridicule; no matter how different anyone might look, we all could use a hug at some point. Probably. That's the message I take away from the game.

Visually, everything seems to be on point. The backgrounds aren't super detailed, but they look nice and are generally soothing even when depicting some less than ideal locations. Character animations are weak, like paper dolls with heads that bob up and down, but somehow those limitations feel perfectly adequate. Pressing one of the left shoulder button also applies or removes a filter that approximately mimics the scan lines on an old television, which I rather liked. 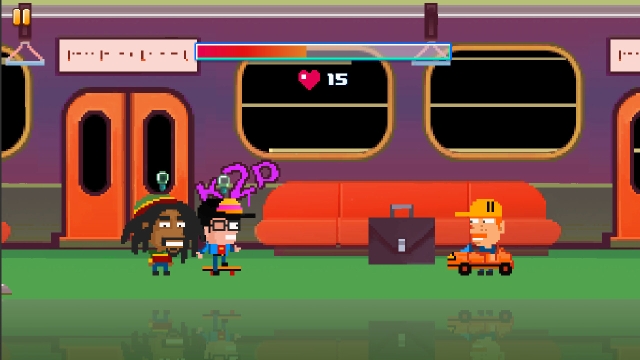 If you are thinking to yourself that hugs are better when shared with a friend, you're in luck: there's a multiplayer mode. Each player can use the desired controller and select a character. Then both of you appear on the screen and go through the same process as normal, except that the first person to hug or pass the wrong individual loses. It's neat to have the option to go through the process with a buddy, but the mode doesn't earn clover and that's a bit of a bummer when there are so many characters just waiting to be unlocked.

To keep players entertained beyond the few minutes it might otherwise last, iHUGu provides objectives at the rate of several each half-hour or so. You can complete a run of a minimum length, or use an item such as the life preserver to get a nice bounty of clover, which improves your odds of getting additional characters. Sure, there's no point to any of it beyond having extra avatars from which to choose, but mobile games like Crossy Road have used a similar setup for years and it apparently pleases people. Not surprisingly, it works just fine here.

Available on the eShop for $3.99, iHUGu offers a basic arcade-style experience and wraps it in good vibes and cute artwork that elevates it ever so slightly without quite managing to turn it into more than a casual diversion. There's enough content to unlock that you can play for hours if you find you want to, but for many the game will probably wear out its welcome within the first hour or so. Pick it up if you just want something a little different and a lot more positive in your gaming library. And if you can snag it when a nice sale price is in place, well, so much the better.
3.5/5

If you enjoyed this iHUGu review, you're encouraged to discuss it with the author and with other members of the site's community. If you don't already have an HonestGamers account, you can sign up for one in a snap. Thank you for reading!

© 1998-2021 HonestGamers
None of the material contained within this site may be reproduced in any conceivable fashion without permission from the author(s) of said material. This site is not sponsored or endorsed by Nintendo, Sega, Sony, Microsoft, or any other such party. iHUGu is a registered trademark of its copyright holder. This site makes no claim to iHUGu, its characters, screenshots, artwork, music, or any intellectual property contained within. Opinions expressed on this site do not necessarily represent the opinion of site staff or sponsors. Staff and freelance reviews are typically written based on time spent with a retail review copy or review key for the game that is provided by its publisher.