Assault on Metaltron is a tower defense game from indie studio Blue Sunset Games, featuring a dancing robot who runs around futuristic battlefields and attempts to preserve a cache of life crystals that is being raided by various alien foes resembling knights, dragons and other such creatures that seem decidedly out of place in the metallic wasteland.

I like tower defense games. I tend to appreciate the standard ones most, but I'm open to unique ideas and there are definitely some of those at work here. However, most of the available diversions from the norm don't have a particularly positive effect on the overall proceedings. They just force the player to learn some new mechanics without doing much to reward the effort. 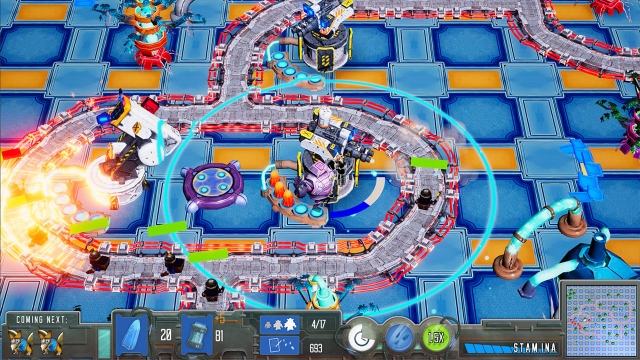 As a stage begins, a series of pods drops onto the play area, which is littered with zipper-like roads and metallic vegetation. Wherever you see a cluster of plants, you can build a tower, provided you have sufficient energy. You start with 200 energy points, and gain more either by defeating adversaries or by summoning the next wave of foes prematurely. Towers cost anywhere from 50 to 700 points, and different types are more effective against different monsters. For example, the basic gun towers hit everybody, including flying units, while the poison tower drops a blob of harmful vapor that dragons can avoid. Some enemies can cloak themselves, and you can only damage them if they come within range of a radar pedestal.

Once a tower has been placed, the player character can stand on one and "dance," which happens automatically whenever the robot is in the proper position. Dancing slowly fills a meter to level up the tower. Typically, you can improve the rate of fire, the power of each shot, and the range, but only one at a time. No tower can be upgraded more than 5 times using any combination of those perks you like, so you have to decide which setup is likely to prove most useful. While dancing, you can shuffle between the dances, and even stop in the middle of one. Then if you return later, you can resume your funky movements without the meter starting fresh, which I appreciated. I also liked that for a larger chunk of points, you can buy upgrades outright when time is of the essence.

Your precious cache contains 20 life crystals as a stage commences, and you win the day as long as you have at least 1 of them remaining when the last of the waves have come and gone. No enemy can snag more than 1 crystal at a time, so there's a lot of leeway if your only goal is victory at any cost. Preventing even a single crystal from being taken is your actual goal, however, and that feat is sometimes fiendishly difficult since some enemies do a really good job of shrugging off your towers' attacks. More expensive towers take them down without much trouble, but often those structures cost more resources than you have. I found that surviving to the end of a stage is usually easy, as is dealing with the toughest monsters that tend to come in later waves, but getting a foothold early on without letting a single weaker monster reach the crystals is surprisingly difficult. 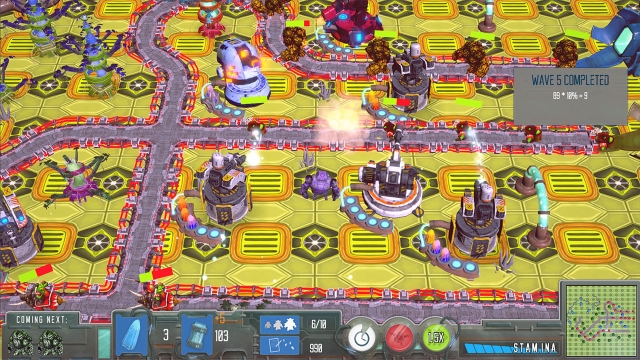 The game's 40 stages are divided in lots you unlock 10 at a time, and you can access the second and third groups of them by clearing enough stages in the first and second batch. The final group of levels is only available once you have earned a "perfect" rating on each of the 30 stages available up to that point, a tedious task that inspired me to say "No, thanks."

Maybe I would have been interested in making the attempt to see the last few stages, except Assault on Metaltron is at times too obviously the result of a smaller development team's labors. The tutorial starts things off on the wrong foot, with text bubbles that fill up with text as the text slowly shrinks to fit the available space. Load screens between stages--or when choosing to restart one from the menu--last 6 or 7 seconds, and all you get is a static screen with the word "Loading" in green text. I don't say this because I demand amazing load screens, but because it felt rather jarring. The first time I encountered such a delay, I had enough time to wonder if maybe the game had frozen, because everything I encountered up to that point gave off the "this game will freeze on you" vibes. It never actually did crash, for the record, but there were plenty of awkward moments anyway. In stages, the robot often clips through pieces of the environment, and the camera always starts zoomed in way too close to the action. You can tap the shoulder buttons to pan out to a nearly reasonable distance, but there's no option that lets you see the whole area at once and so you must rely on a mini-map as you stumble about.

By default, the action moves sluggishly, but you can speed things up to 1.5 times the normal rate to move everything along. Enemies behave the same at either speed, which I genuinely appreciated after recently playing another tower defense title where that wasn't the case. But there's not a lot of enemy variety, and the towers are uninteresting. I also found them difficult to distinguish, even after hours of play, plus sometimes one tower would hide another tower's base from view so that it could be difficult in some instances to notice where I needed my robot to dance and provide vital upgrades. 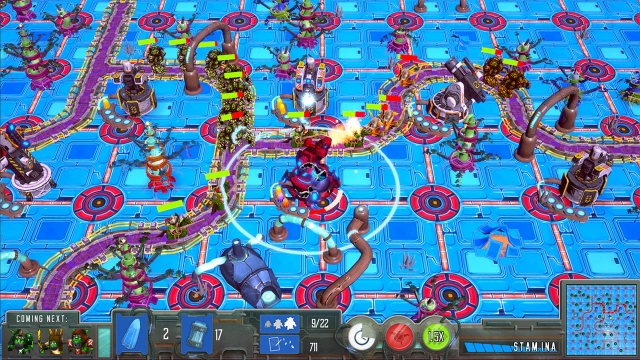 Normally, I like to play games on my television, but I decided to see how Assault on Metaltron played in portable mode. It felt... decent. The visuals popped a bit more on the smaller screen, which was nice, but there were no touch controls and everything felt more natural to me when I used a Pro Controller. That surprised me, but the good news is that your experience should be roughly the same--for better or for worse--in either mode of play.

Given the lack of depth, I suspect a lot of players will have the most fun playing in small bursts on an extended car ride or similar. After the tutorial is out of the way, you get access to every defensive option available. You'll quickly see most of the units from the limited bestiary. What I liked least is that players don't earn rewards for completing a stage, other than the aforementioned access to additional challenges, and you can't permanently enhance towers so that it feels like each victory contributed to something bigger. The closest thing there is to proper depth is a mode that lets you create a random map with settings to suit your preference, but that can only add so much to the game's overall longevity. And there's a multiplayer version of each stage, which forces players to stay fairly close together as they run around the arena and attempt to thwart the invading nasties. I guess two siblings might enjoy working together to clear stages, but the weak presentation ensures older gamers are unlikely to pair up and play together for long when there are so many dynamic alternatives offered on the eShop.

If you're looking for a tower defense game that does things a little bit differently, Assault on Metaltron fits the bill. It just doesn't look or feel all that great while doing its thing. A bit more polish all around, along with a design that provided players with a proper sense of progression, would have gone a long way toward letting the core concept (which feels rather fresh) live up to its true potential.
3/5

If you enjoyed this Assault On Metaltron review, you're encouraged to discuss it with the author and with other members of the site's community. If you don't already have an HonestGamers account, you can sign up for one in a snap. Thank you for reading!

© 1998-2020 HonestGamers
None of the material contained within this site may be reproduced in any conceivable fashion without permission from the author(s) of said material. This site is not sponsored or endorsed by Nintendo, Sega, Sony, Microsoft, or any other such party. Assault On Metaltron is a registered trademark of its copyright holder. This site makes no claim to Assault On Metaltron, its characters, screenshots, artwork, music, or any intellectual property contained within. Opinions expressed on this site do not necessarily represent the opinion of site staff or sponsors. Staff and freelance reviews are typically written based on time spent with a retail review copy or review key for the game that is provided by its publisher.