In what will go down as a complete shock to exactly nobody, When Ski Lifts Go Wrong is a game about building ski lifts and ski lift-like paraphernalia that often go catastrophically wrong, turning innocent skiers into distressing blood smears on a near industrial level. Because if I cant have a nice holiday, then no one should be able to.

In my efforts to get seasonal skiers, snowboarders and cyclists from their entry location to the top of whatever ridiculous thing they wanted to fling themselves off that particular day, I was responsible for a lot of deaths. Most of that was my fault. In a stringently physics-based fashion, youre give a lot of direction in how you should be constructing the structures needed to complete each mission; laying foundations, using planks or logs, correct positioning of pulleys or the best use of guide ropes and the incessant strength of the humble triangle in support beams. Gently, gently, you are introduced to each and every aspect of Ski Lifts toolbox until it feels youre ready to go it on your own. Then a support strut gives out and slams a skier into a cliff. Or your cable runs too low and passengers are introduced to a fatal face full of pine tree. Or a pulley gets tangled and your chair lift is re-purposed into an impromptu siege catapult, flinging its passenger skywards. 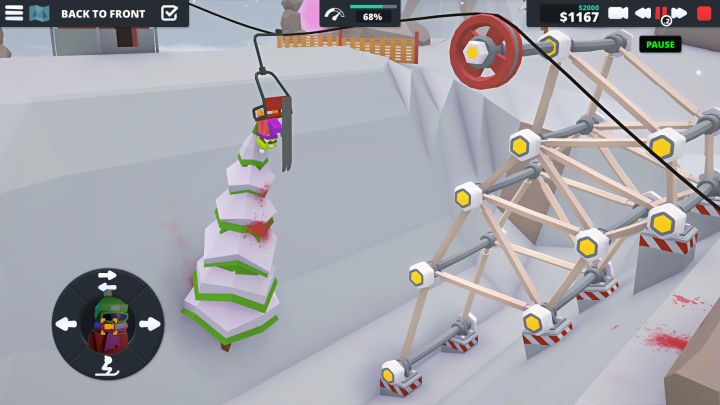 It should be noted that, rather than just expecting you to get things fatalistically wrong, Ski Lifts borderline demands it. Youll find achievement milestones popping considerably quicker for the amounts of murders you undertake long before you start seeing significant rewards for the boring drudgery of delivering a skier alive and healthy. In the heart of it, Ski Lifts is often about tinkering; about coming up with an idea of what structures you need, and then watching them fall to pieces when put under the lightest of strains. To progress, you need to figure out how to bolster their strength. The game helps you with this; it will highlight the sections of your structures that have buckled, letting you know what you need to redesign or scrap and start anew.

Lobbing a bazillion new load-bearing logs onto your groaning structures does start dialing up the costs, and, in an appreciated touch, this doesnt have to ever slow you down. You can win awards for finishing stages under budget (or by running the lines past a collectible medal; or by not slaughtering everyone gleefully), but this doesnt halt your progress. The game does reward you for being frugal with your design choices, but you can progress by throwing endless cash trying to make your poorly-advised wonky tower stable just long enough to transport a small party of skiers before collapsing into rubble. 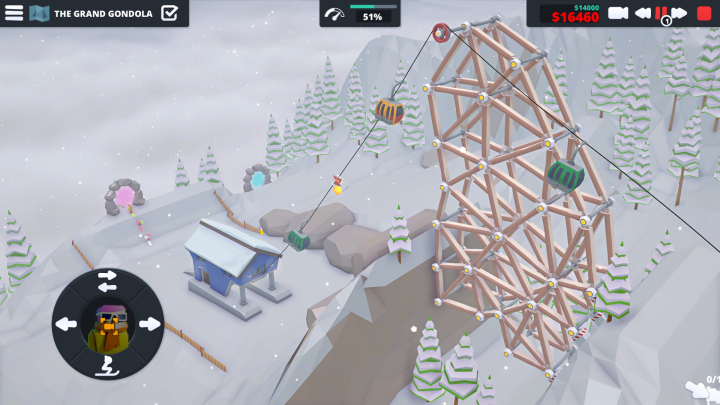 Ski Lifts is also pretty good about not tying itself down to just, well, ski lifts, making you design gondola lines as well as straight up ramps for skiers and snow mobiles to launch off. I could have probably done with a little less of the stages where I had to build a thing, and then control the person who had to then use it (perhaps I preferred not to have any agency over the people I was about to kill), but it does provide a small-ish campaign mode with enough variety to stand out. It also has full workshop support, meaning you can not only sample other peoples home-made stages, but design and upload your own. Assuming you own the PC version, anyway. Suffer on, console peasants.

When Ski Lifts Go Wrong is a functional way to build something up that will most likely collapse in seconds, then spend a while sleuthing your way towards a solution that will either appear obvious in hindsight, or by blowing the budget on a creaking monstrosity that stays together more by spite than engineering knowhow. I had more fun with it than I expected. Regardless of the countless orphans I accidently produced as a side effect for not figuring out how cliff faces work.
3.5/5

If you enjoyed this When Ski Lifts Go Wrong review, you're encouraged to discuss it with the author and with other members of the site's community. If you don't already have an HonestGamers account, you can sign up for one in a snap. Thank you for reading!

© 1998-2020 HonestGamers
None of the material contained within this site may be reproduced in any conceivable fashion without permission from the author(s) of said material. This site is not sponsored or endorsed by Nintendo, Sega, Sony, Microsoft, or any other such party. When Ski Lifts Go Wrong is a registered trademark of its copyright holder. This site makes no claim to When Ski Lifts Go Wrong, its characters, screenshots, artwork, music, or any intellectual property contained within. Opinions expressed on this site do not necessarily represent the opinion of site staff or sponsors. Staff and freelance reviews are typically written based on time spent with a retail review copy or review key for the game that is provided by its publisher.