With the leader of the Black Warriors defeated, Marian freed, the player character kissed, and the words "May you live happily forever" displayed on screen, Double Dragon concluded with a nice fairy tail ending; actually quite fitting for a beat 'em up that didn't take itself too seriously, despite its violent premise. However, the Feel Goods didn't last very long, as Technos, a year later, gave players a shocking "treat" in Double Dragon II: Marian is killed within the first five seconds. Adding insult to injury, the murderer, leader of the Black Warriors, doesn't stick around, allowing his minions to take care of the Lee brothers while he hangs out in yet another ridiculously-designed lair.

The subversion continues as Billy and Jimmy Lee, martial arts experts, emerge yet again from a garage. However, instead of a housed Firebird, the storage area now contains a compact helicopter, and instead of fighting enemies in the streets, stage one commences on a rooftop. As enemies literally cartwheel their way into the frame, you, as one of the brothers, must unleash a flurry of punches to a goon coming from the right with, well, the right button. After knocking him to the ground, let's say you turn your attention to an identical character sprite coming from the left; you strike using the same button... but your protagonist continues attacking to the right. Confused? The devs have taken it upon themselves to modify the controls. The left and right buttons do what their names imply, and you even get different kick or punch animations depending on where you're facing when one is pressed!

Odd, but your brain adjusts quickly to the changes. 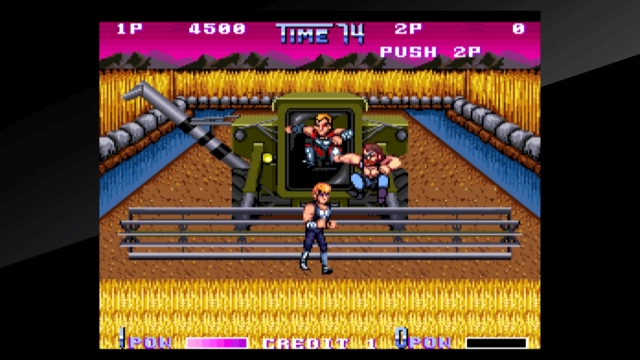 Also unlike its predecessor, there's no overpowered elbow move that can be exploited easily throughout the game. The sequel still has the elbow attack, but more times than not, there's a chance it won't connect, either because opponents are ducking or countering before it does any harm. One maneuver that comes close to being strong is the spinning air kick, but it's tricky to pull off*, not to mention, again, there's a chance enemies dodge. So what does all this dodging entail? It means players are actually required to perform feats resembling skill when engaged in combat; try different kick, punch, and grab combos to see what works best, as well as carefully dodging enemies when you're getting crowded.

Another interesting change is how the Black Warriors, whether it be red-headed mohawk dominatrices, burly, bearded foes with eye patches, or towering, wavy-haired Abobos, are a tad more aggressive this time. Not by much, but it is noticeable how quickly they swarm and break your combos more commonly. It's not on the level of Renegade's absurd crowd pressure, thankfully. However, the speed can be a bit too cruel when you're trying to stand after being knocked down, especially since there's no invincibility frames. Quite frequently, an enemy will hover above your character, ready to swing once you're back up. You know what's really messed up? When you die, lose a life, and respawn, you have invincibility frames... but enemies are immune to your attacks during this period. Why? To be fair to the AI?? 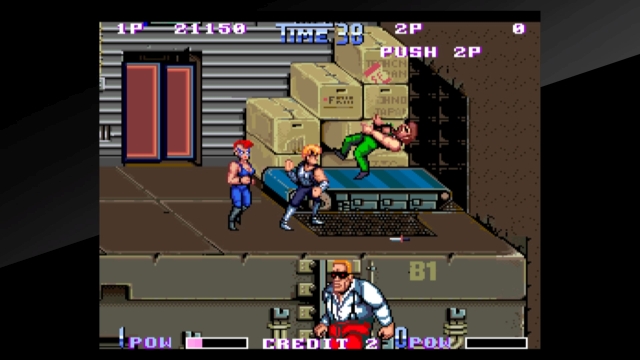 While the overall issue of invincibility frames isn't that big a problem when compared to the refinements, Double Dragon II does something very unfortunate: it shamelessly remade sections of the first game. The journey starts promising with the opening rooftop stage, fighting against Mad Max-style enemies, and having to learn a different control configuration. But then the second stage begins, you move a few inches to the right... and it's the second stage from the first game. It literally has the weird fence you can climb that goes nowhere, an enemy wielding an explosive weapon, and the task of "platform jumping" upwards until you reach an area with an assembly line belt.

What really blows my mind is the fact that the devs remodeled these reused locations. Usually when devs recycle something, it's to save time and money... but... but effort was put into transforming these assets. So what's the point? Why not just make completely new areas for the sequel? Considering the team had an entire year to finish this sequel, it really makes you wonder; was using a modified control scheme from Renegade, "borrowing" assets from the first Double Dragon, and going with the whole subversion angle an interesting idea, or was it more to do with them having trouble coming up with actual new ideas? Regardless of the reason, Double Dragon II unfortunately fails to be anything greater than a slightly-better version of Double Dragon, because it's too busy having an identity crisis.

*Unless you adjusted the difficulty in the options.
3/5

If you enjoyed this Arcade Archives: Double Dragon II - The Revenge review, you're encouraged to discuss it with the author and with other members of the site's community. If you don't already have an HonestGamers account, you can sign up for one in a snap. Thank you for reading!

© 1998-2020 HonestGamers
None of the material contained within this site may be reproduced in any conceivable fashion without permission from the author(s) of said material. This site is not sponsored or endorsed by Nintendo, Sega, Sony, Microsoft, or any other such party. Arcade Archives: Double Dragon II - The Revenge is a registered trademark of its copyright holder. This site makes no claim to Arcade Archives: Double Dragon II - The Revenge, its characters, screenshots, artwork, music, or any intellectual property contained within. Opinions expressed on this site do not necessarily represent the opinion of site staff or sponsors. Staff and freelance reviews are typically written based on time spent with a retail review copy or review key for the game that is provided by its publisher.