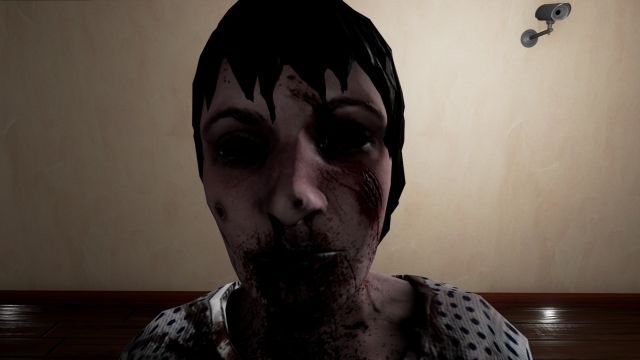 Evil has two very big selling points, and you see them whenever you look down. Yeah, its protagonist is a nearly naked girl, clad only in a bra and panties. I won't look down my nose at those who might be tempted into buying the game based on this premise, but understand one very important thing here. Our heroine isn't simply roaming around her own home, but her parents' abode. The game implies that she's of a fairly young age, perhaps in her teens. However, the way she speaks suggests she's either younger or much older but childlike. So you spend the rest of the game trying to figure out if its developer sexualized a child or infantilized an adult. Either way, it renders Evil's sex appeal angle rather disturbing.

So let's ignore that for now. Let us veer away from that aspect of the discussion, because really the game is awful even without its creepy selling point.

Evil is yet another in a long line of European haunted house games. You play Ksenia, a girl left home alone by her parents, who experiences the usual ghostly phenomenon: monstrous sounds coming from televisions, loud noises and knocks on the front door, to name a few of her problems. On top of that, an apparition wanders the hallways, threatening to... 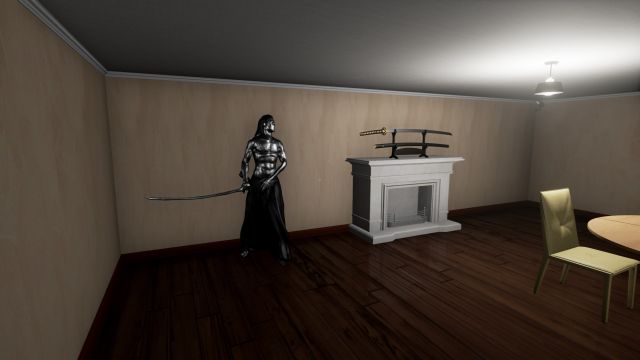 You know, I'm honestly not sure what happens to Ksenia if the ghost catches her, but it can't be pleasant. If you collide with her, the camera does an extreme close-up on her face. Meanwhile, what sounds like an old vacuum cleaner and a lawnmower fighting in a wind tunnel blasts from your speakers. You then receive the option to quit or retry, with infinite respawns on the table.

That's just as well, because you never know when the ghost will appear. Her movements are random, and your death is often just an unfortunate accident. You'll mosey from the kitchen to dad's office, and then BOOM! The specter was waiting for you around the corner, and now you're dead. You enter a room and rummage around to find an event item or a clue to help you advance. One second you're looking at books, the next that ugly, blood-stained mug pops up on the screen and it's "Game Over" for you. You didn't even see her coming.

When you're not getting killed by the ghost, you're spending way too much time trying to complete mundane tasks. You exit the girl's room and run to the bathroom first, trying to ignore constant, horrendous, unsightly screen tearing. Eventually, Ksenia wants you to find her father's office or take a pill, but you have an awful time figuring out how to accomplish these things because Evil's translation is awful. You'll even spot a few absolutely cringe-inducing lines like "Me not allowed to go in there" or "There's too dark." 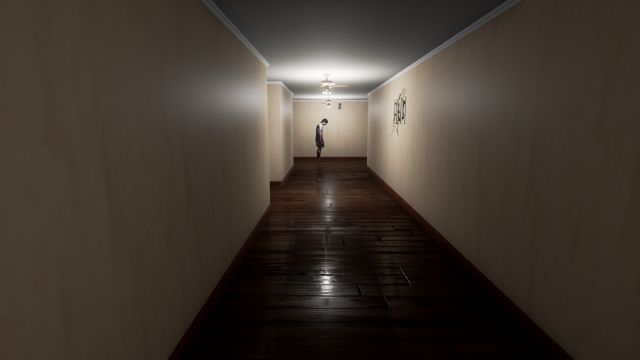 Ksenia's house also lacks rhyme or reason. Your first task is to find a bathroom sink, and two of the three bathrooms you enter don't even have sinks. Hell, one of them has a washing machine, but no sink! You scope out all of the other rooms, and discover several bedrooms, a dining room complete with a wicked samurai statue and a closet that only holds a bike. "Slapdash" doesn't even begin to describe this house. No wonder it's haunted...

You hit a key point in the story, where you need to hide in a closet and the game tries awfully hard to scare you. However, the scene only succeeds in being loud and cliched, plus most of the aforementioned elements rendered the game's scare factor null and void. After that, Evil drops a not-so-subtle hint that you need to open a safe. However, Ksenia doesn't know the combo, so you need to scour the house for it. If you're lucky, you can trigger a grisly scene in one of the bathrooms, where you find the clue for the combo attached to some gore: LL VLL Z L LX V.

My first thought was Roman numerals, but I didn't recall a numeral Z. Also, the combo is six numbers long, so there's no way it starts with 100. I had to watch several videos on YouTube before I figured out that the dev used L in place of numeral I, and that Z meant "zero." However, I'm stuck between slating this puzzle because of its obtuseness and praising it because it's the only semi-clever thing the game has going for it. 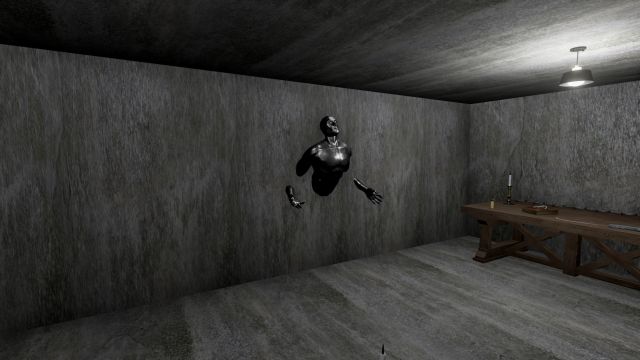 Eventually, you reach the final shebang, where characters exchange a bunch of poorly translated dialogue and a gaping plot hole manifests. I had a hell of a time figuring out what Ksenia and her guest were saying, but it had something to do with satanism. You then get a choice, and I'm assuming there are multiple endings. I'm not sure because I have no desire to return to this game and find out. The one I earned was anticlimactic at best, and prompted nothing more than a shrug from me.

After a seemingly long struggle, I finished Evil and regretted donating an hour and a half of my free time to it. I can't say that it showcases any redeeming qualities. Its storyline is a rehash of numerous creepy woman games and movies, it has no actual soundtrack or music and its visuals are exactly what you would expect from a cheesy, first-person horror game. The only thing the game offers its players is a pair of boobs, which happen to be likely attached to a minor. Let's face it; Evil is an abysmal horror game that isn't scary, charming, thought-provoking or thrilling. It's hackneyed, problematic, often unfair and not at all worth your time.
0.5/5

If you enjoyed this Evil review, you're encouraged to discuss it with the author and with other members of the site's community. If you don't already have an HonestGamers account, you can sign up for one in a snap. Thank you for reading!

© 1998-2020 HonestGamers
None of the material contained within this site may be reproduced in any conceivable fashion without permission from the author(s) of said material. This site is not sponsored or endorsed by Nintendo, Sega, Sony, Microsoft, or any other such party. Evil is a registered trademark of its copyright holder. This site makes no claim to Evil, its characters, screenshots, artwork, music, or any intellectual property contained within. Opinions expressed on this site do not necessarily represent the opinion of site staff or sponsors. Staff and freelance reviews are typically written based on time spent with a retail review copy or review key for the game that is provided by its publisher.