See, I have a problem here. Traditionally, these review things are little more than the condensed and organised opinions of the critic authoring it, and I point blank cant decide on how I feel about Montague's Mount. Sometimes, its listless environment is so meticulously constructed that I stop playing the game just to stare at a far off light, or watch the foliage sway in the breeze. Sometimes, I just stand in the rain, watching the colour slowly dribble back into the world. Sometimes, I do nothing but take the time to appreciate the constantly evolving piano music or the stellar voice acting. But in the back of my mind, I know I have to start exploring again, and I brace myself for tedium.

So, let's try this again.

Montague's Mount is billed as a psychological puzzle adventure, starring an amnesiac fisherman, washed up on the shore of a small rural island off the coast of Ireland. The island itself is purposefully dreary, cloaked in monotone greys, drizzled with random showers of rain and backdropped to beautifully eerie and sombre piano music. Items discovered strewn around the island are listed in Gaelic with English subtitles offered, hand-written letters read out with a subtle Irish brogue. A lot of work has gone into making Montague's Mount an authentic experience, and this is to be commended.

Advancing in the game mostly boils down to exploring the island, which takes place in a first person perspective. You do this very, very slowly. Your first order of business is to find a makeshift crutch to compliment your lurching limp, which speeds up your traveling ever so slightly. Then, the island is yours to explore. 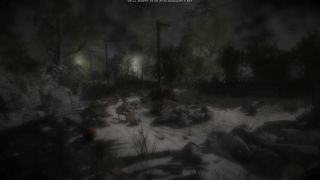 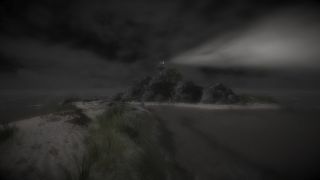 It's worth noting that the deliberately plodding pace is as intentional as the rest of the cosmetic choices that make the island such a depressingly miserable place. The frequent rain that falls from grey skies blurs your vision and forces you to squint at its apex. The world around you is monotone and listless, eventually leaking colour almost begrudgingly. That you travel through it at a crawl seems fitting at first. But Montague's Mount doesn't build this as a strength.

Bypassing several obstacles during your trek through the island means completing a number of puzzles, but most of these are exploration based. You need to explore and find an item, which makes contextual sense, then use it to your advantage. Commonly in Montague's Mount, you will need to find canisters of fuel to power generators, which makes perfect sense considering the isolated location. The problem, then? Backtracking.

There's so much backtracking needed in Montague's Mount that early puzzles seem to use them as their very spine. Find your way off the the starting beach, and you come across a series of desolate houses, long since claimed by the elements. You can't explore them in the constant gloom, so you need to find a source of light. Some ways up a nearby hill, you come across your first generator; but it's empty, and in need of fuel. So you take some keys hanging up nearby, backtrack to the huts, and open a supply shed. From the supply shed, you take the fuel, go back to the generator, start that up, return to the huts, explore them for items needed to complete a puzzle which, to the shock of none, is up by the generator. Only upon its completion can you then walk past the generator to continue further into the island.

Which is a relief. I can finally stop typing generator. 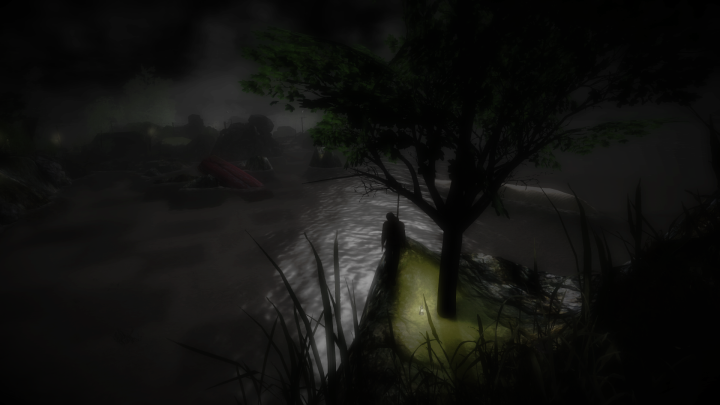 There's nothing wrong with having exploration play such a huge part of your game, but when you've intentionally crippled your mode of transportation, you have to expect frustration to kick in. This isn't aided by a checkpoint save system, which only allows you to save progress once you've moved on to a new part of the island. This might mean only taking a few more steps into its depths, or it might be an aggravating puzzle away. This could work for the most part, as a great job is made making the areas of the island stand alone; you can go back to previous areas, but there's no real need to. Everything you need to progress is right there, you just need to find it, or figure out how to use it.

And therein sets tedium. Because I wanted to explore the island. I wanted to find more cryptic letters strewn around that hinted at the fate of the population. There are moments of Montague's Mount that are genuinely chilling and engaging, you just have to resign yourself to that fact that getting to them is bloody annoying.

So, yeah, I really don't know how to feel about Montague's Mount. It's only part one in a part two series but, now several years since its initial release, the second part has never materialized, and the last mention of it stands behind a failed Kickstarter effort. The developer twitter accounts abandoned, their blog since taken over, randomly, with a Spanish(?) football gossip column. If this is to be the end of it, thats a real shame; as much as Montague's Mount genuinely frustrated me at times, it displays a haunting anti-beauty of sorts and all the foundations needed for a much better game to be built upon. In its current form, with its never-to-be-resolved cliffhanger ending and library of nagging frustrations, it feels like half a game. Mainly because it is. Thats a pretty hard sell.

If you enjoyed this Montague's Mount review, you're encouraged to discuss it with the author and with other members of the site's community. If you don't already have an HonestGamers account, you can sign up for one in a snap. Thank you for reading!

© 1998-2022 HonestGamers
None of the material contained within this site may be reproduced in any conceivable fashion without permission from the author(s) of said material. This site is not sponsored or endorsed by Nintendo, Sega, Sony, Microsoft, or any other such party. Montague's Mount is a registered trademark of its copyright holder. This site makes no claim to Montague's Mount, its characters, screenshots, artwork, music, or any intellectual property contained within. Opinions expressed on this site do not necessarily represent the opinion of site staff or sponsors. Staff and freelance reviews are typically written based on time spent with a retail review copy or review key for the game that is provided by its publisher.